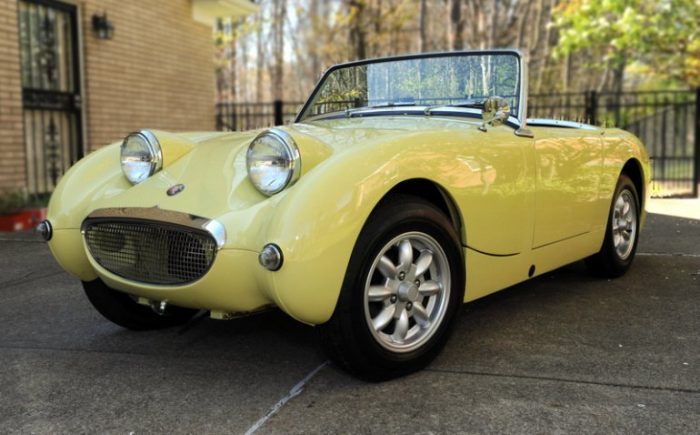 The Sprite was launched in 1958; Mark I versions featured headlamps atop the hood, giving the car the “frogeye” or “bugeye” nickname. Initially, power came from a 948-cc inline-four rated at 43 horsepower, but by the time the Mark IV was introduced in 1966, the engine had grown to 1,275 cc and 65 horsepower. The idea behind the Austin-Healey Sprite was a simple one: Design a basic and low-cost sports car, compact enough to be stored in a bike shed.

This 1959 Austin-Healey Mark I Sprite, for sale on Hemmings.com, benefits from both a full restoration (completed in 2009) and an engine swap from a Mark IV model. With fresh paint, a new interior, and generally sorted mechanical bits, this Sprite needs little more than an owner willing to spend time behind the wheel, though the buyer may want to address the inoperable heater fan motor to extend the Sprite’s driving season. From the seller’s description:

This 1959 Austin-Healey “Bugeye” (aka Frogeye) Sprite was restored seven years ago with less than 1,000 miles driven post restoration. It has won many first place awards at local car shows, and best of show. It is an excellent running car and reliable driver.

Documentation that came with the car shows the original owner was from Oregon, but moved the car with him to California, then Connecticut. It was then purchased by an Ohio resident and remained in the Cleveland area with the next four owners.

I purchased the car from a car club friend who was trying to get it running after sitting in a garage for 10 years. We got it running and I drove it frequently the first summer, before having it fully restored.

The car came with the 1,275-cc engine, which runs great without any oil consumption, making it quite peppy to drive even at highway cruising speeds. All gauges and switches work except for heater switch (heater motor does work).

A full restoration began in 2008. The car was totally stripped to a bare shell, verifying that this was a very solid car with minimal rust. All components were cleaned, painted, and renewed or replaced. Restoration was completed mid-2009 with the car back on the road soon afterwards.