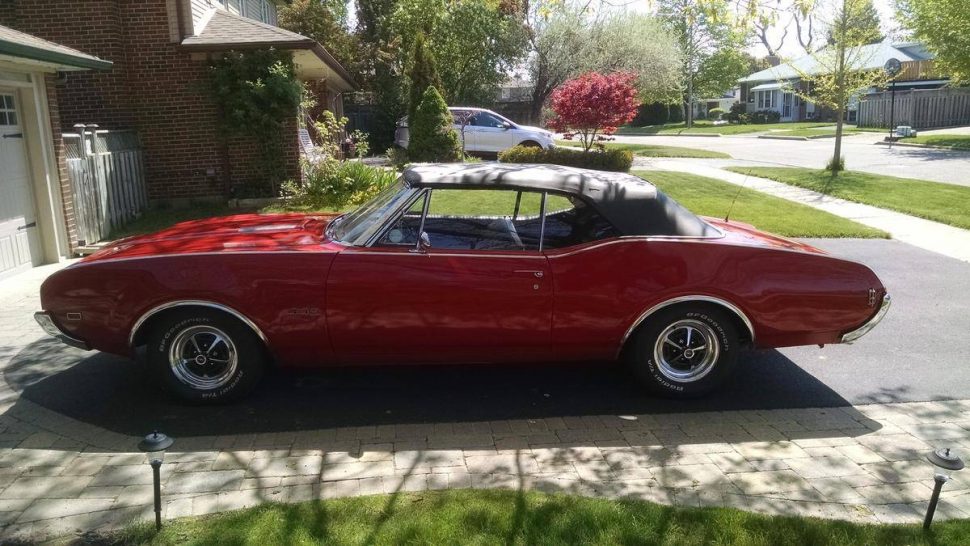 For their money, 1968 4-4-2 buyers were treated to a standard 350hp 400-cu.in. V-8 with a four-barrel carburetor, three-speed manual on the floor, dual exhaust, Morocceen-tailored bucket seats, front and rear anti-roll bars, boxed rear lower control arms and, of course, 4-4-2 badging.

Oldsmobile’s 4-4-2 became a separate model on the all-new ’68 edition, rather than an option on the Cutlass. The base Sports Coupe carried a starting MSRP of $3,063, the hardtop Holiday Coupe started at $3,127 and the convertible would set you back $3,341.

From there you could pile on options like: Rally Stripes, Custom Sport Wheels, a close- or wide-ratio four-speed manual or Turbo Hydra-Matic, Rally Pac Instruments, front discs with power assist, a limited slip differential or UHV Transistorized Ignition System, to name a few. A bench seat was a no-cost option.

Of course there was also the new-for-’68 W-30 “Force-Air Induction System,” which unleashed the 4-4-2’s inner drag car, adding outside air ducts mounted below the front bumper, 4.33:1 cogs with a limited-slip differential, four-speed manual transmission or heavy-duty three-speed automatic and Rally Stripes (red plastic front inner fender liners were also part of the deal). The legendary Hurst/Olds first bowed in 1968 too, substituting the W-30 400 for a 455 and adding distinctive Hurst cosmetics.

This Scarlet and black 4-4-2 convertible automatic for sale on Hemmings.com is fitted with SSI wheels, and has a bench seat with a column shift. If you find that aftermarket steering wheel distracting, the seller has the original. Though the car is now in Canada, the M in the VIN identifies it as a Lansing-built car, so it wasn’t built there. From the seller’s description:

Has been in family since 1985 (Bought from relative in 2014). Thirty year old restoration. Have undated records back to 48,000 miles, dated records back as far as 1979 at 58,000 miles. Engine is original 400 block and “G” heads. Engine rebuilt in 1988 and has 34,000 miles on rebuild. Car looks like what an older restoration would look like. Automatic column shift transmission, original ralleye rims, bench seat, power windows, electronic ignition. No cracks on dash, newer roof but 2″ tear on c-pillar, glass rear window. After market steering wheel installed but have original.