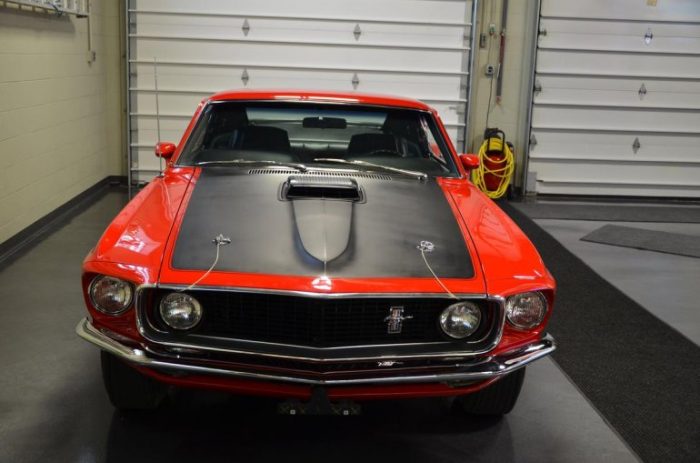 Ford rolled out the Mustang’s Mach 1 package in 1969 as well as the thundering 428 Cobra Jet engine offering buyers what reviewers back then hailed as the ultimate performance Mustang.

The 428 CJ could be had with or without Ram Air, and if buyers checked off 3.91:1 or 4.30:1 gears with Traction-Lok (or Drag-Pack has it came to be known), they received the 428 Super Cobra Jet. The SJC added an engine oil cooler, cap screws in place of conventional connecting rod bolts, a special nodular iron crankshaft, and a unique balancer, all to help cope with the rigors and stresses of drag racing.

A grand total of 10,080 428CJ Mustangs were built for the 1969 model year and there were 3,181 428 SCJs — though not all of these engines ended up in Mach 1s. The Mach 1 package was popular with Mustang buyers in its inaugural year accounting for almost one quarter of the nearly 300,000 Mustangs sold.

This ’69 Mach 1 with 428 SCJ power for sale on Hemmings.com looks showroom-fresh in the seller’s photos and boasts a short list of accolades that would seem to back that up. From the seller’s description:

1969 Mustang Mach 1 R-code Fords desirable 428 Super Cobra Jet powered muscle car. An original Phoenix car with 38,000 miles, it was restored in 1991 by local Ford restoration guru Randy Honkala. Shown in numerous car events in Arizona and Minnesota. Best-in-show at Land Of Lakes muscle car classic in Minneapolis. (over 200 60s and 70s muscle cars.) Also a winner at MCA Nationals. The car was always trailered, Ran only at shows or for maintenance. Despite being a show car, Everything works, including the clock. Many original parts were restored or, if presentable, were left original. The all important serial numbers match! This car was also featured in Mustang magazine and many car calendars. This is a true drag pack car!