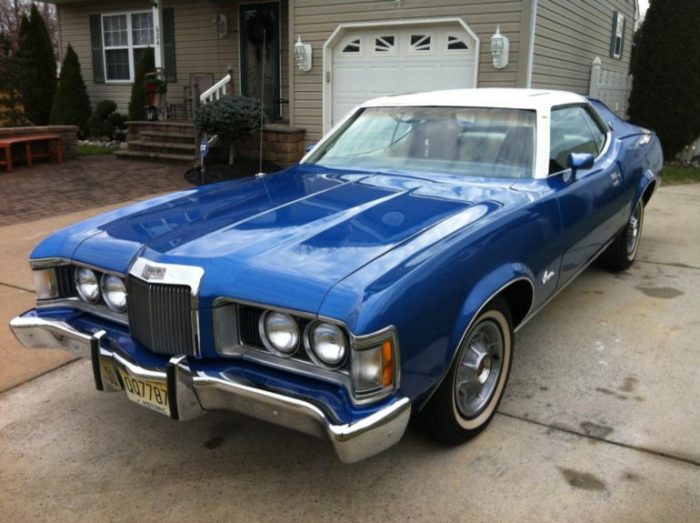 Described as a restored driver-quality car, this cat comes powered by a 351 Cleveland V-8 topped by a two-barrel carburetor, which was rated at 168 SAE net horsepower. As an XR7 version, it adds chrome rocker panels, unique wheel covers, a vinyl roof, and additional gauges, and this example was even ordered new with the power sunroof and Whisper-Aire air conditioning.  Originally designed as an upscale version of Ford’s Mustang, the Mercury Cougar would take an entirely different direction for the 1974 model year, growing in size and plushness to become a personal luxury coupe instead of a pony car. That makes this 1973 Mercury Cougar XR7, for sale on Hemmings.com, the last of the “classic Cougars,” the final model year to share a platform with the Ford Mustang, and the last version to focus on performance over comfort. Best of all, you probably won’t see another one at every Saturday morning cruise-in. From the seller’s description:

You are viewing a 1973 Mercury Cougar XR-7 that has undergone a loving, FRAME-ON restoration with under 75,000 ORIGINAL MILES (at time of ad).

This car was billed as the “Gentlemen’s Muscle Car” or a “Muscle Car in a Sports Jacket” because it was more luxurious and refined than its’ Mustang stable mate.

It comes equipped with the 351 Cleveland 2bbl, arguably the best V8 ever produced by the Ford Motor Company, mated to the C-6 Automatic Transmission.

It has power steering, power power brakes, and the rare, power sunroof option. Only 840 power sunroofs were ordered that year. How many are left???

The A/C and original AM/FM radio are functional.

The floor console houses the shifter and a WORKING analog clock.

This car has never been hit as evidenced by the arrow-straight body lines.

Also included are the owner’s manual, owner card, and retail delivery card – all original as well as the Marti report.

Don’t let this oportunity to own a piece of American muscle car history slip away. Although I’ve tried to be complete in my description, I will answer any and all questions to the best of my ability.