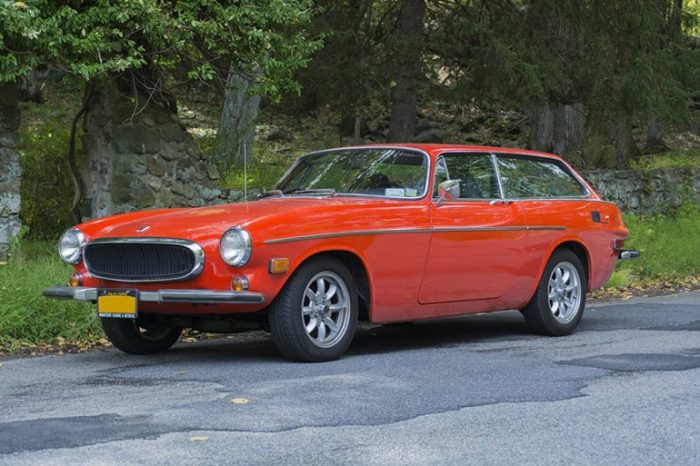 Launched in 1972 and built for just two model years, the 1800ES, designed by Jan Wilsgaard, blends the stunning good looks of Pelle Petterson’s coupe with the do-it-all sensibility of a compact wagon. Less than 8,100 examples were built in 1972 and early 1973, meaning that clean examples can be somewhat hard to find. This 1973 Volvo 1800ES, for sale on Hemmings.com, is fresh from a recent refurbishment that included a new interior, engine work, exhaust, driveshaft and front suspension.

Volvo’s two-door sport wagon, the 1800ES, was the final variation of its 1800 model line. Most of the orange paint is said to be original, though the recent freshening also included new paint on the roof to mask where a roof rack had previously been fitted. The seller proclaims the car ready for a cross-country trip, and we hope that’s just what the car’s next owner has in mind. From the seller’s description:

This 1973 Volvo 1800ES is a 61k-mile example with its original 2.0L engine, automatic transmission, working A/C and $25k in receipts for substantial work completed 2 years ago. Briarcliff Classic and Imported addressed a variety of items on the car to bring it to its current condition, including a new interior and paintwork, new camshaft and fuel injectors. The car is well sorted and ready for a cross-country trip. A roof rack was previously installed, which was removed and the roof refinished. A good portion of the Volvo 113-2 orange paint is believed to be original, and there is no evidence of prior accident damage or rust on the car.The 2.0L B20 four-cylinder has been gone through with the following items repaired: new camshaft, lifters and timing gears, new water pump, radiator hoses, fan belt and upgraded fan clutch. The Bosch fuel system received new fuel injectors, fuel pump and filter and the automatic transmission, a three-speed Borg-Warner 35 unit, was serviced. The underside features a new exhaust system and rebuilt driveshaft. The front suspension was rebuilt, including new ball joints, upper/lower control arm bushings and tie rod ends. The 4-wheel disc brakes are in order.