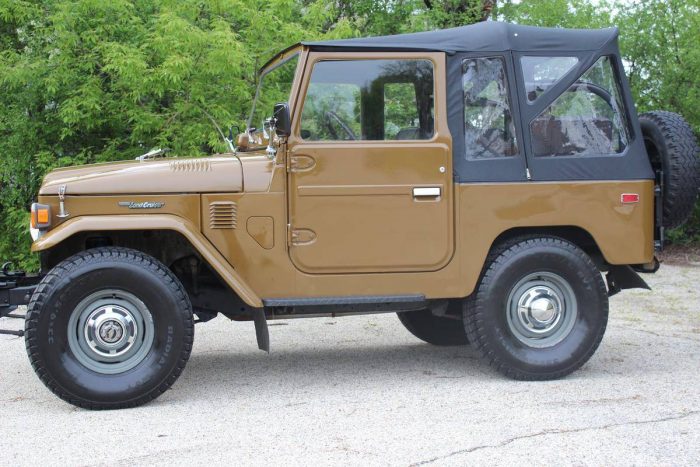 FJ40s were never meant to be plush (or for that matter, even comfortable by modern standards), fuel efficient, or practical for day-to-day driving, unless your regular commute involves crossing streams and pastures. Instead, FJ40s were honest, utilitarian trucks, designed to get one through the worst weather and over the roughest terrain with nary a complaint. That’s the appeal of this 1976 Toyota FJ40 Land Cruiser, for sale on Hemmings.com: It isn’t fancy, but it’s an honest example, still equipped with its 4.2-liter inline six, that appears to be as rust-free as the seller describes.

Replica WatchesFor the first few months of 2014, it looked like Toyota FJ40 Land Cruiser prices were going the way of early Volkswagen microbuses, with a handful of examples trading hands above the $100,000 threshold. Owning an immaculately restored Land Cruiser, or one customized with features like an ostrich-skin interior and a mirror-finish paint job, defeats the entire purpose of these capable off-roaders. Repainted in 2007, it’s in decent enough shape to show on weekends, but no so valuable that its next owner would faint at the thought of off-roading with it. From the seller’s description:

1976 Toyota fj40 land cruiser in very very nice driver quality condition. The FJ was restored in 2007 and repainted. The FJ has all original body panels and floors, there isn’t a spec of rust on this vehicle. I Just put a brand new soft top and did a full tune up and oil change. I have also replaced several other little things such as weather stripping, new council, new mirrors, etc. The FJ has the inline 6 cyl 4.2 liter engine that runs real strong.