You are here: Home  /  American Car  /  Cars Brands  /  Tesla Motors  /  Your First Video of a Tesla Model 3 Testing on the Street
American Car 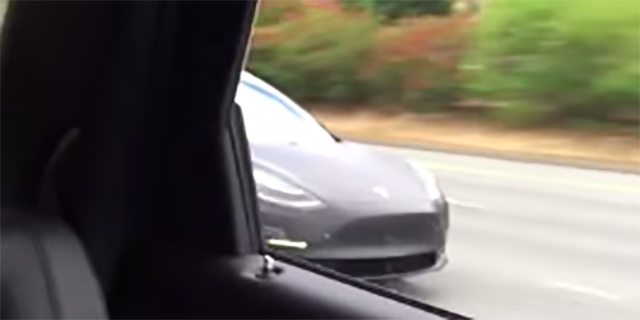 In February, Tesla CEO Elon Musk said “we are not gonna show everything about the Model 3 until a lot closer to production time,” and just this month, he said it still needed six more weeks of design tweaks.  When Tesla introduced the Model 3 back in March, the company was up front about the fact that the car we saw was not the final production version.

Despite having never laid eyes on the thing, fans went so far as to camp out for days to place their reservations ahead of the Model 3 unveiling. And while the prototypes shown were actually drivable, there’s still a lot to be done between now and when the Model 3 hits mass production.

We thought the front end might change after complaints that it didn’t look finished, but from what we can see here, it hasn’t. Granted, this prototype doesn’t quite look production-ready, so a nose job could still be in the works.