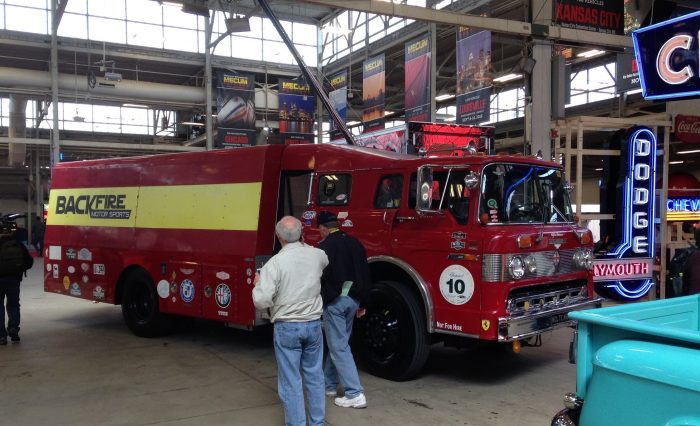 At the annual Mecum Spring Auction held in Indianapolis each May, you can find many beautiful examples of your favorite classic cars for sale. You can find the car you grew up with, the car your dad had, and the car you never should have sold. You can also find vehicles that you never even knew you wanted up until that moment.

By William Hall. Photos by the author.

So, as I perused the long rows of staged cars assembled in the exhibition hall at the Indiana State Fairgrounds, I was a bit oblivious to a large red presence looming over the pack. My subconscious registered it as a firetruck, but only when my eyes focused did I read the license plate that said molte miglia (“many miles” in Italian). My gaze wandered further down the body, noting an OSCA and an Alfa Romeo emblem, as well as multiple event stickers. What’s this all about, then?

The Ford-made Custom Cab chassis was fondly familiar to me. When I was about three years of age, my father took me over to the town firehouse and the lieutenant propped me up behind the wheel of their pumper. I still remember the smell of the wet canvas firehose hanging in the tower, the freshly waxed station floors, and the interior of that old Ford cab. 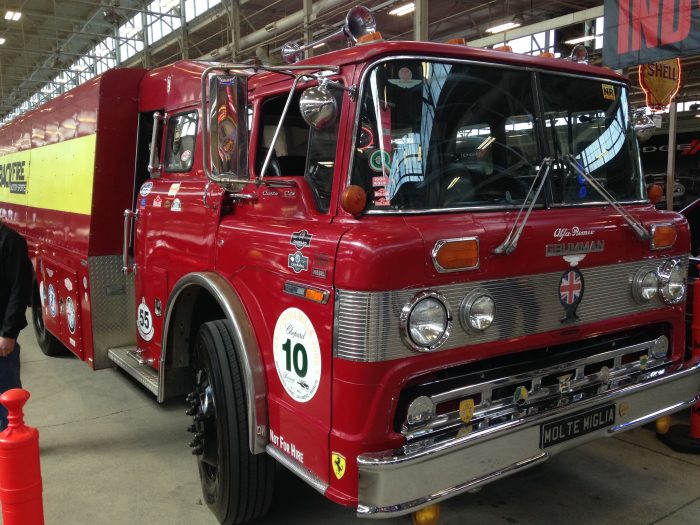 But this 1986 example was missing the well-polished chrome-rimmed gauges and valves seen on the sides of most surplus firetrucks and instead sported a long, custom box. A walk around back revealed all: The rear of the truck had been gutted and a pitched aluminum deck and winch had been nicely fabricated in place. This old firetruck was also a period-looking race car hauler!

This checked two boxes on my vehicle bucket list. And conveniently, each justified the other.

Then I saw it. Those two letters on the auction description: “N.R.” No Reserve! My head swooned.

Now, most experienced auction attendees will tell you that No Reserve, in the right setting, is like throwing gas on a fire. It means that there is no minimum bid to buy the vehicle. No Reserve cars sometimes exceed market price because emotion gets involved. When a bidder thinks he has a real chance to own that lot, he starts taking a little ownership mentally before it ever crosses the block. 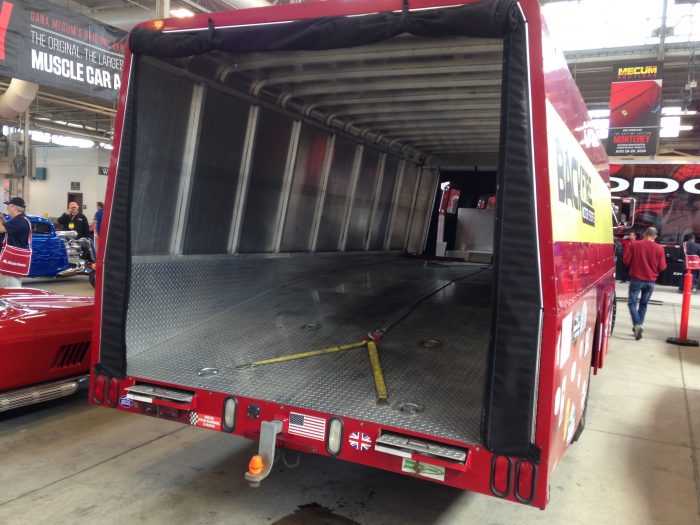 Now my mind was operating on two separate hemispheres. My left brain was dutifully checking out the condition of the rig. Simultaneously, my right brain engaged in a conversation… no, a debate… with myself about why I needed to own this right here and right now.

I’ve been told (by a Ferrari dealer, no less) that owning a firetruck is dollar-for-dollar the most fun you can have with a vintage vehicle. Just think of the Fourth of July parade opportunities! Many are sold by municipalities that are owed nothing by the many years of service the trucks provided. So they are usually pretty cheap.

However, cheap to buy can often mean expensive to own. Most will not sustain highway speeds for extended periods, making the 300-mile drive home from Indy somewhat of a logistical challenge. Parking is a problem too; you can’t put this out in the backyard as it will bury itself to its axles under its own weight.

Ah, but this one (my right brain pointed out) has been retrofitted with highway gears and a turbocharged Caterpillar diesel engine. The seller claims it’s been trouble-free for many cross-country jaunts and cruises comfortably at 75 MPH. Poor logical left brain stammered, “but… but… you can’t.…”, until it was so feeble as to not be heard at all. 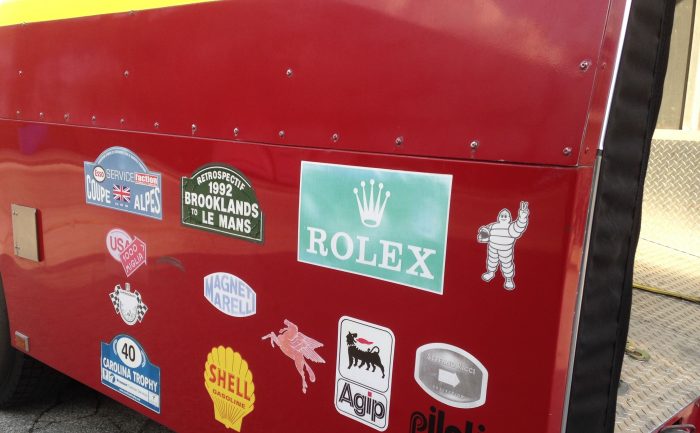 The truck started up very nicely and without the smoke associated with older diesels. I spoke with the driver taking it through staging, and he assured me that even though it had manual steering, with its large, handsome tiller of a wheel it was actually quite easy to drive. Left brain was really starting to get worried.

I followed the truck up to the block and positioned myself a few feet away from a bidder’s assistant. Left brain made one last gasp, and begged to just leave the room for 45 seconds and let the idea pass. I stood my ground.

But rather than placing a winning bid slightly less than its scrap value, I heard another voice a few yards away. It was another guy’s right brain outbidding mine! And then another across the hall. And another. They were buying my firetruck! And when it was all done, the seller — whom I didn’t meet, but I’m quite sure I’d like — probably got a respectable price for his substantial investment into the vehicle. And the buyer got a pretty square deal, too. As it should be.

William Hall is a writer, car collector and broker based in Elkhart Lake, Wisconsin.