You are here: Home  /  Automotive News  /  I Did a Digital Detox in a 1960 Cadillac El Dorado. Maybe You Should, Too
Automotive News 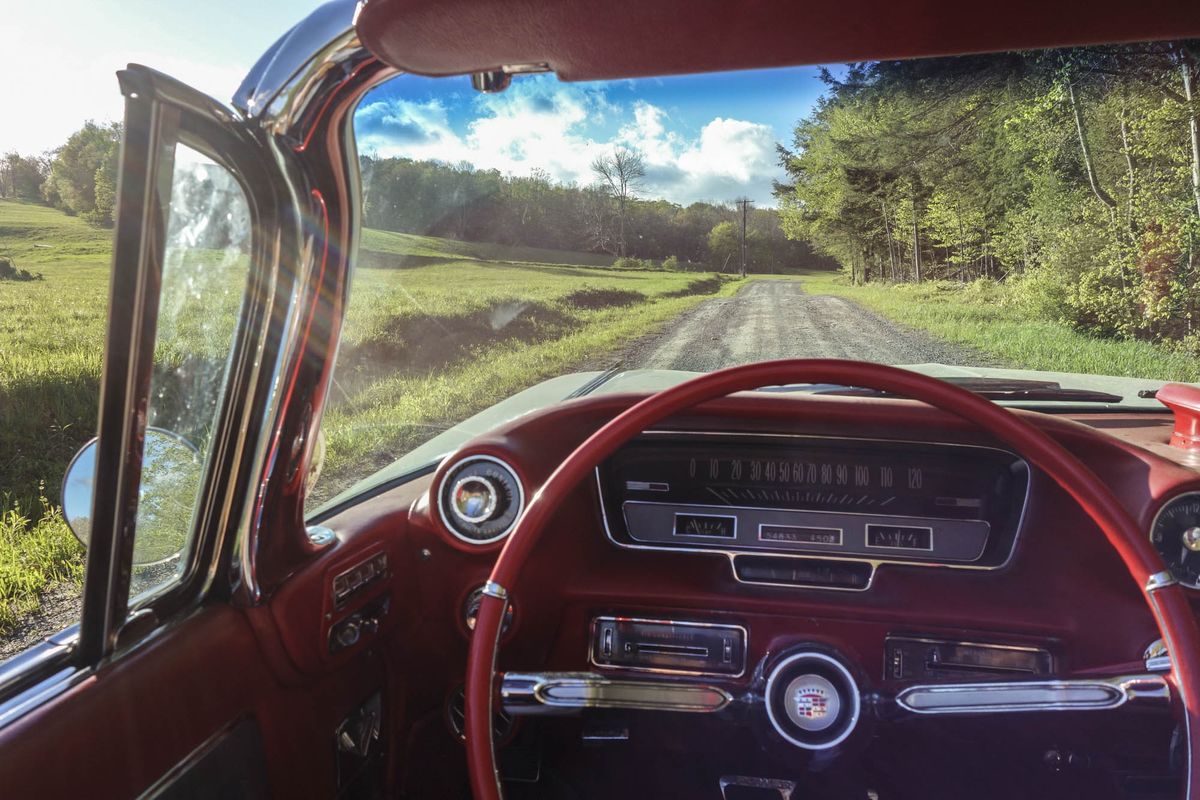 I Did a Digital Detox in a 1960 Cadillac El Dorado. Maybe You Should, Too

There are a million ways I want to start this story.

I could tell you how vintage cars are more popular than ever, and the number of under-40 people who buy them continues to rise every year.

I could point to the rash of studies that describe how exposure to screens (cell phone, computer, tablet, etc.) affects the brain like an addiction to any drug.

I could paint a picture of a verdant 15-acre plot in the Delaware River Valley three hours north of New York City and a world away from the current political climate.

But mostly I want to tell you how calm I felt driving 80 mph on an upstate New York highway with no seat belts, Courtney Love blaring on a retro boom box, and a 10-pound Chihuahua sliding around on the red bench seat next to me.

Ordinarily I would not have felt that calm. I’m not a small-dog type of person.

The Value of Vintage

I found myself in this situation as I drove myself back from the 24-hour digital detox, which I had somehow convinced a room full of editors would be a good idea as a way to explore modern uses for vintage cars. The idea also happened to dovetail nicely with this woodland retreat I had been stalking online for some time and wanted to see for myself.

“We have a crisis of attention now,” McKeel Hagerty, the chief executive officer of Hagerty.com, told me before I left. “I travel all around the world speaking to executives, and they can’t get off their phones. Our brains are not wired to defend ourselves against the additive qualities the technology is bringing us.”

Hagerty was the one who lent us—my sidekick DJ Louie XIV and me—the wheels.

“More and more we are going to see enlightened folks try to peel their minds away from this existence,” Hagerty said. “And it’s not about nostalgia. It’s about wanting to feel something real.”

OK, sure. I was actually surprised he was talking about adult executives here, not teenagers or delinquents. What I was more interested in was the car.

And what a car for us two chinchillas looking to detox: a 1960 Cadillac El Dorado in ecru with a Coke-bottle red interior. It came to us in convertible form (the top did rise up at the push of a button, hypothetically, after someone spent 10 minutes removing half the top of the trunk to free it) with a 345-horsepower V8 engine that growled and purred like a Bengal cub. Air suspension originally came standard; so did cruise control, air conditioning, and a radio (naturally, some of these things no longer worked).

Have I mentioned the fins? They shot out either end of the rear like lethal weapons lined in red lights—you could stab yourself on those. The gas tank was hidden underneath the trunk at the center of the tail, behind a little mesh gate. It would take a gas attendant forever to find it, if you didn’t give him any clues.

The year 1960 was the last time Cadillac made those epic wrap-around glass windshields and the year after the El Dorado logged the all-time largest fins on an American car, ever. In 1960, Car Life magazine named the El Dorado the “Best buy in the luxury field.”

I realize I have not defined what I mean by “digital detox.” It means nixing any exposure to screens for the duration of the session—TV, mobile telephone, computer, GPS, and navigation included. Concessions were made for my Sony camera, so I could shoot the trip, and the aforementioned boom box, which we held between us in the car on the way up. We used a Rand McNally Road Atlas and directions from strangers to navigate our way north; we gave a few key people (my editor; Louie’s mom) the landline phone number for the barn. You know, in case the world ended while we were away.

We stayed at Milk Barn, a 144-year-old estate near Hankins, N.Y. It had been renovated in the 1970s and '80s by an Italian fashion photographer so he could host his bohemian and artist friends there as a retreat from New York City. That makes sense—the etched and stained glass throughout, the sauna, the marble countertops, and massive wooden beams above Old World wooden floors feel directly descended from European stock.

Gabe Adiv, who bought it in 2015, added such things as thick, plush, white beds with Hudson Bay blankets, record players, and Palo Santo holy wood healing stocks. It was perfect for our goal of detaching and detoxing from the hyper-stimulation of modern life.

Of course, there were some flubs along the way.

To start the car cold, you have to push the pedal a few times; to reverse, you pulled the shifter on the steering wheel all the way to the right; for drive, move the lever to one of the two spots in the middle. All this was well and good. I found it charming.

But the car did stall out in the worst possible spot—on a hill rounding a tall gradual corner on some back road somewhere between Livingston Manor and Callicoon. I didn’t have my phone at hand, where it was exactly, I happily couldn’t say. But a nice man in a truck pulled over, chatted for a while, and offered to let us use his landline “up at the house” while he speculated about what the problem might have been. We figured it out before it came to that.

I expect the engine was still a little cold, and combined with the half-tank of gas angled at such a way as to leave half the tank sucking fumes as we climbed the hill; ol’ Betsy just needed to catch her breath. Louie looked stricken. But we rolled backward a bit, let her sit, and 10 minutes later started it up again without a hitch.

The smooth, massive, floating-drive style of the El Dorado more than made up for any inconvenience. I loved the wide, thin steering wheel and the bouncy-as-a-sofa seats. That car could handle anything, as long as you didn’t make any sudden moves. (Old cars have old brakes, as the saying goes. She would brake fine, you know, but you had to give her pleennnty of advance notice that you feel like stopping.)

Anyway, vintage cars are a relationship, not a business exchange. If you want something that won’t give you any good stories, buy a Honda.

We did miss a few turns here and there on the way up. It happens—I got to be very good at judging how many miles had passed by the minutes on my wristwatch.

What did we do with all our free time? Not much. We went running on old empty country roads. Lounged in a blue-tiled soak tub. Cooked. Read books. Played Scrabble—a remarkably contentious game when you can’t access an online dictionary to prove “baldy” IS A WORD, LOUIE.

And we chased that blasted dog through the fields for an hour of what he thought was playtime but nearly sent his already nervous owner into a panic attack. City-raised Lou imagined his pooch would be scooped by a coyote or a hawk if he ventured too far afield. I was of the notion that dogs have an uncanny sense of finding their way back home by dinnertime. A block of cheese and a well-timed tackle (ahem) ended the “fun.”

Mostly we chilled out. I thought that I’d be itching to activate my phone—I love Instagram and texts and Twitter; they’re part of my job. But it was quite the opposite. With the cell phone off, every sense was heightened: I appreciated the crisp, spring smell in the air better; I felt the wind and the sun; I heard elements of long-loved songs I hadn’t noticed before. When we drove into town for lunch, I felt placid and focused rather than frenzied after the drive.

This wasn’t a major change, to be sure, but simply a shift in energy. Everything in my brain settled down and evened out. And when I got back to the office the next day I felt more refreshed than when I’ve spent long weekends physically away but constantly bombarded with alerts and news on my phone.

When I finally did log on—I had a midday interview for Bloomberg Businessweek magazine, and the press never sleeps—it caused no small amount of anxiety. The emails and texts came like a deluge. I survived, of course. That’s part of being a responsible adult.

But for days afterward I kept thinking about the fact that I felt more peaceful and engaged with the world driving a car that had no technology to speak of, in contrast with the distraction and disconnection that happen in modern cars chock full of automated and computerized systems.

Because I could so keenly feel what the car was doing, driving was an active experience. These days it can feel so passive, so secondary.

In fact, I’m going away to Mexico next week. I may not turn on my phone at all. I just need to find the right car.