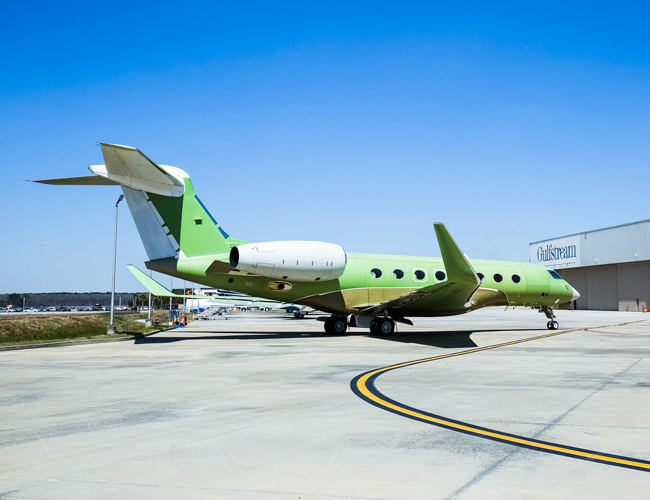 Show You Inside the Gulfstream Private Jet HQ

From Issue Two of the Gear Patrol Magazine. Subscribe today for 15% off the GP Store.

Big implications loom. Power is the ability to zip off up to 8,000 nautical miles, about enough to get to any major or minor city around the world in a span of hours; decadence is doing so in the lap of luxury. Become the owner or part-owner of such a thing, or just loiter around it, and you grow too — you start reciting Tom Cruise quotes from Tropic Thunder in your head, mumbling “Lookin’ so fly, like a G6,” aloud. Sixty-five million sounds about right. The largest aircraft Gulfstream makes, the G650, is diminutive by aircraft standards. It’s less than half the length of a Boeing 787 Dreamliner’s fuselage and carries 19 passengers compared to the larger jet’s 242. But prepare to board one — its clad aluminum wingtips gleaming, gangway steps to your own private flying clubhouse lowering smoothly to the tarmac — and the G650 feels immense.

See the same plane as it’s manufactured, and the dollar signs start tabulating with a different sort of logic…

Editor’s Note: This is an excerpt from Gear Patrol Magazine: Issue Two. A full report on the Gulfstream Jet HQ is forthcoming in our upcoming Aviation Issue, June 2016.
Read More in Our Magazine

A version of this story appears in Issue Two of the Gear Patrol Magazine, 286 pages of stories, reports, interviews and original photography from five distinct locations around the world. Subscribe Now: $35