You are here: Home  /  Auto Tech  /  The World of Speed Is the best racing museum you’ve never heard of?
Auto Tech 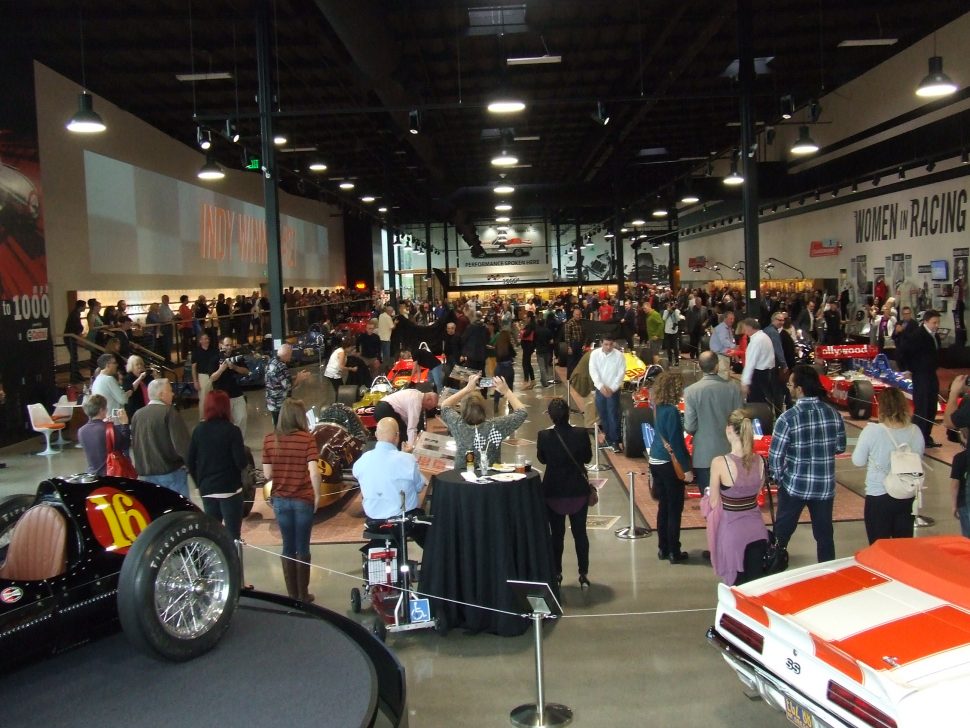 The World of Speed Is the best racing museum you’ve never heard of?

More than 300 invited guests and members view 33 genuine Indy cars from nine different decades – a full field under one roof – celebrating the 100th running of the 500. Photos by Don Homuth.

On any given day some 150,000 cars whiz through Wilsonville [OR] on Interstate 5. Some are commuters, some are on business, or drug runners (really), or shoppers heading toward the Woodburn Company Stores – folks going about their daily lives in their cars.

There must be some car enthusiasts, and chances are they don’t know about the World of Speed facility just to the west of I-5. More than simply a car museum, it is the culmination of its founders’ – Dave and Sally Bany – dream of a “full service” place where racing enthusiasts can go to see unique displays, gather for local cruise-ins and hold other special events, meetings, parties and even weddings. 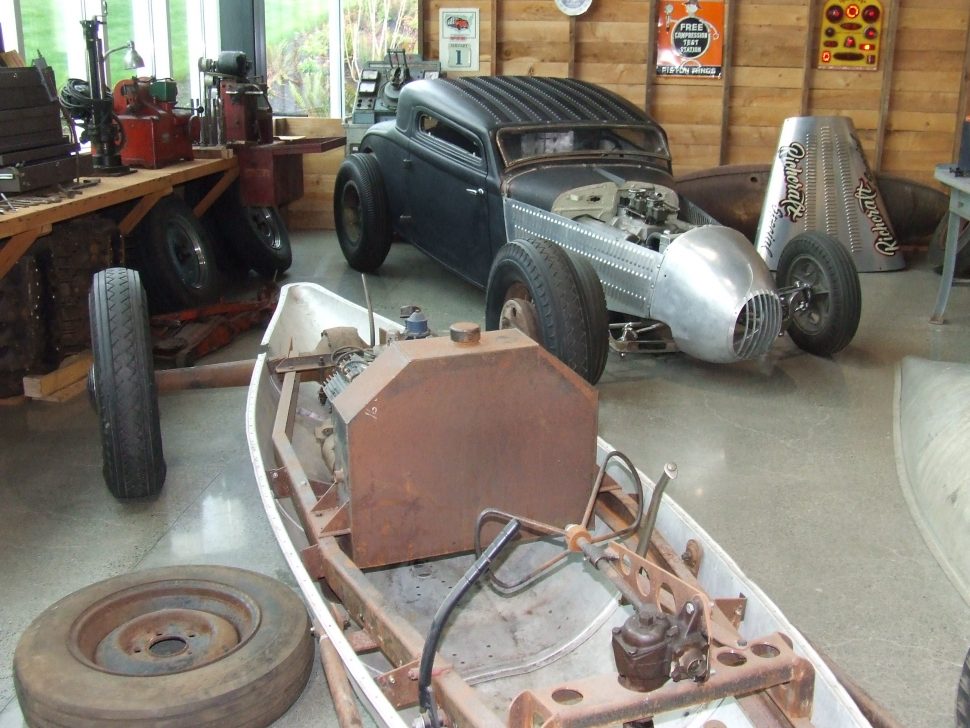 There are more than just racing cars on display, too.

The Banys met in high school, and both were part of the local car culture/hobby. He drove a 1957 Fairlane and later a 1965 Impala. They joined Portland car clubs. They dreamed that maybe someday they would put together a facility where other car enthusiasts could share their passion – maybe a drive-in restaurant or something modest.

Three years or so ago, they began to make it happen. They started a foundation to accept funding, hired an executive director, and arranged financing from other foundations, private businesses, local school districts, the State of Oregon and memberships. They searched up and down I-5 from Portland to Salem to find a location, and when the previous Dodge dealer building came up for sale, they took a leap and bought it.

That facility, located on the west frontage road, is now the “World of Speed.” Be forewarned, though – the sign is easy to miss for anyone rushing down the superslab. 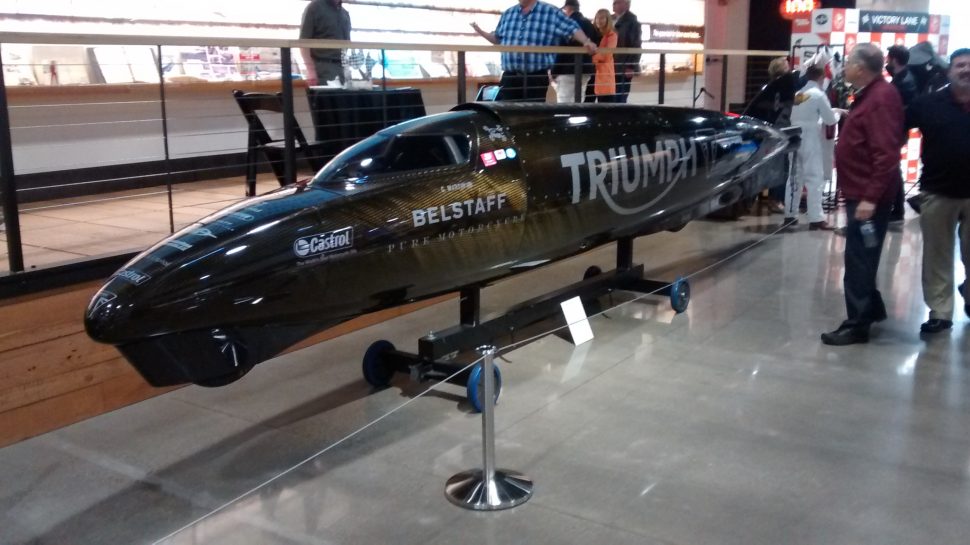 If it’s about speed, chances are pretty good there’s something of it here. There are displays about NASCAR, land speed records and attempts, drag racing, other open-wheel racing (midgets, karts, Sprint, Formula 1), two historic unlimited hydroplanes hanging on the wall, and fast classic motorcycles on display. There’s even a rocket-powered Triumph land speed record machine, though this is temporarily out racing and scheduled to return in September.

The current featured exhibit is a full field of 33 cars from the Indianapolis 500, but not all are from the same era. The oldest currently is a genuine 1914 Sunbeam, but at the end of the summer the exhibit will get a 1911 National that ran in the first Indy 500. It’s not available now because – and this is real – it is currently being raced in selected races in Indiana. 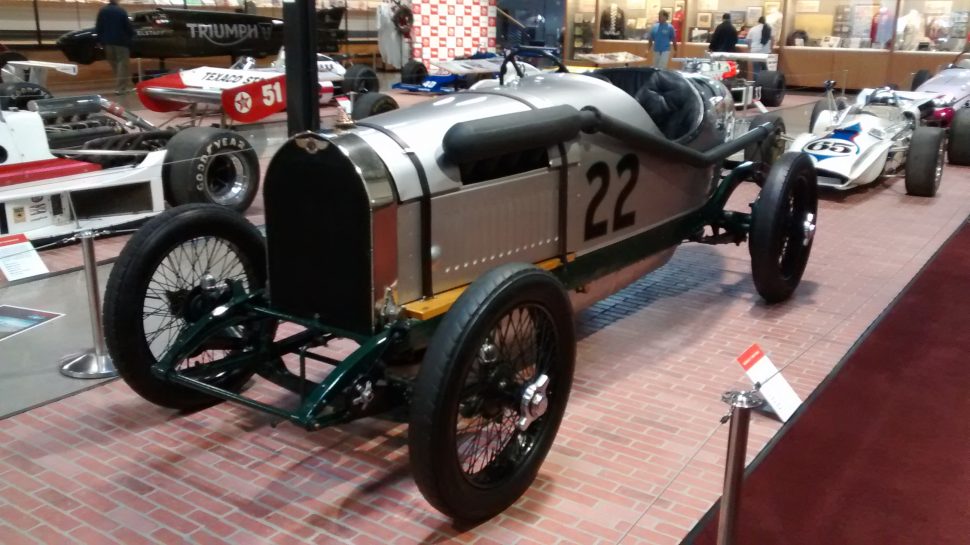 There’s a Bentley, a couple of machines from the ’30s and ’40s, and several from the ’50s right up until the present era of the Dallara chassis. It is a unique field to be found nowhere else, one that celebrates and encompasses a full century-plus of the Indy 500. Enthusiasts and interested observers can walk to within a few feet of the cars, peer into the cockpits and examine every visible component without any interference.

Any Indy 500 fan would find that display compelling. Looking at those early machines with their exposed cockpits, upright steering wheels, no seat belts or racing harnesses, the mind boggles at the men who drove them back in the day. Or women; though of a later era, and thus equipped with more contemporary safety features, one of Janet Guthrie’s rides is here. 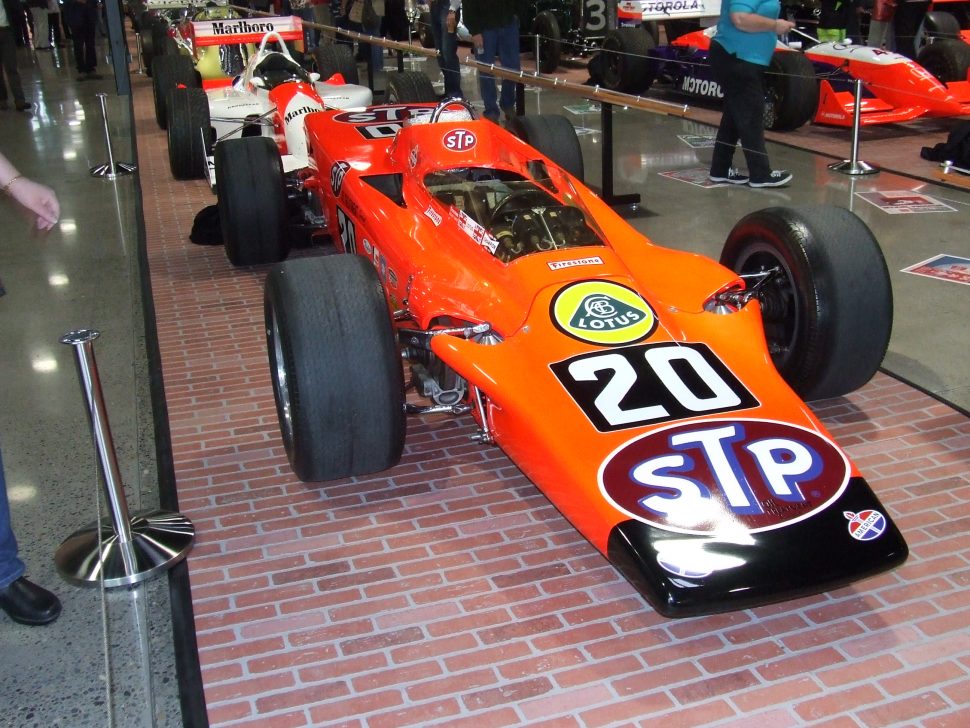 What do you want to remember? What have you forgotten? The last ride of Rodger Ward? It’s here. How about the car for Juan Manuel Fangio, that he never qualified with and retired from racing shortly afterwards? That’s here. The STP turbine that Andy Granatelli entered? That’s here too. The 1961 Cooper-Climax that Sir Jack Brabham drove in 1961? Yep. Cars with names that no one save the most knowledgeable will remember. Cars with easily recognizable driver names. Al Unser? Two of those. Some of the tires show the wear on the right side down into the cords that was common at Indy. At least one car still has fuel and oil streaks in an “as raced” condition. 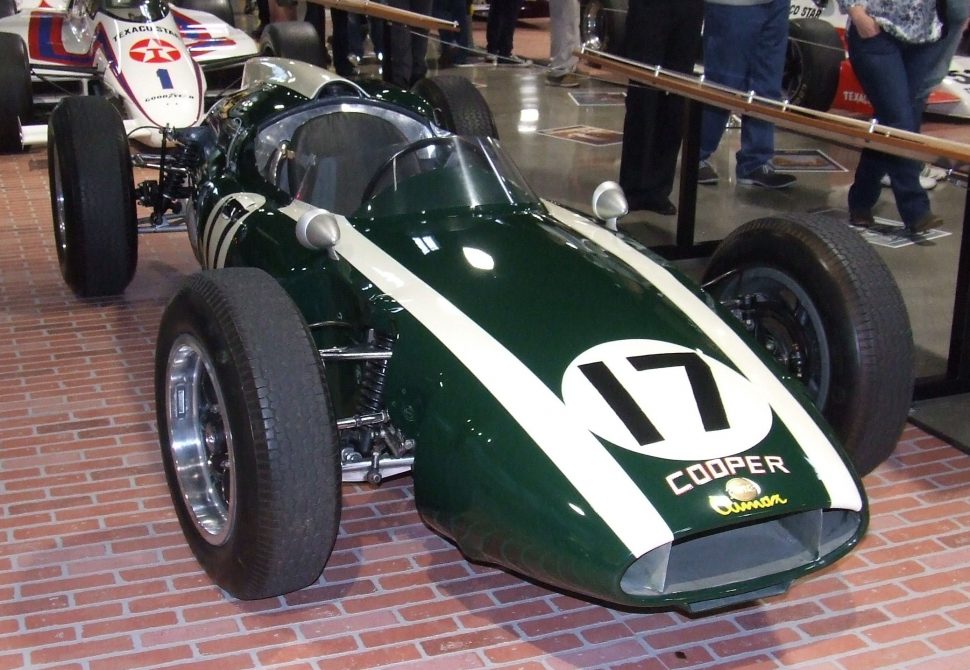 Set up on faux brick flooring to give the display a visual air of originality, the accompanying placards with explanations should please even the most knowledgeable, and provide more than enough information to the casual observer. Kudos to curator Ron Huegli, a genuine Indy 500 fanatic. 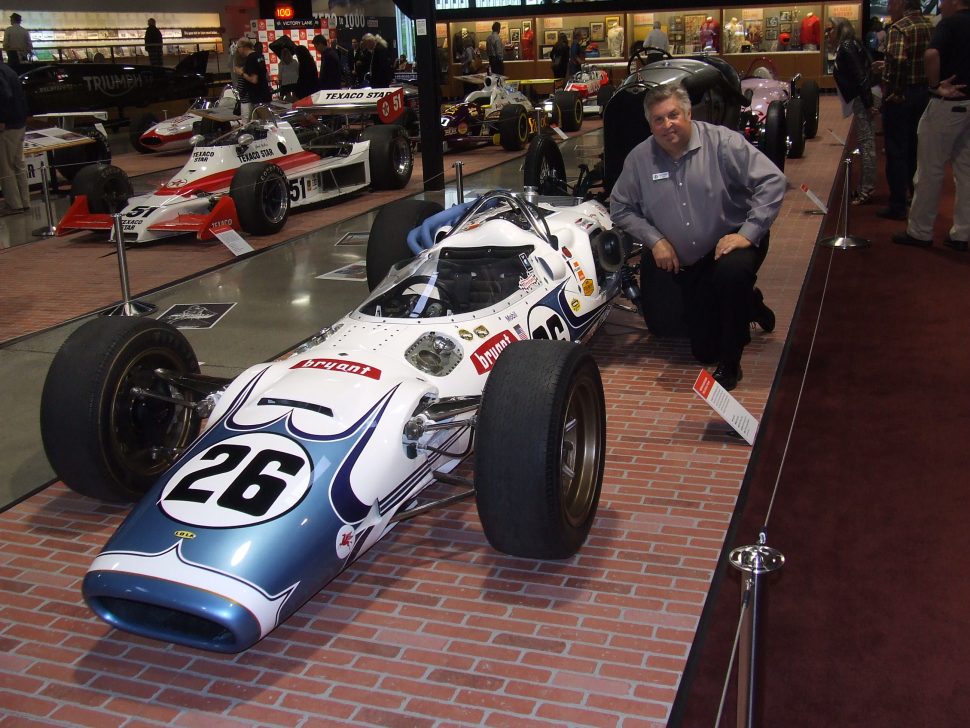 Museum curator Ron Huegli with the #26 1966 Lola he drove in this year’s parade lap.

Huegli’s credentials as a racing fan began when his parents took him to a drag race at the age of three months. Over the years he has hung around race tracks, done some grunt work for local teams in the Pacific Northwest and finally got his own Funny Car. He met the founders of World of Speed through those efforts, and now calls himself a “curator in training,” assembling various exhibits and collections. This year was his first to attend the Indy 500, and in the parade of past cars, he drove Roger Ward’s 1966 Lola, car #26, on the track. That’s dedication, not to mention the opportunity of a lifetime! 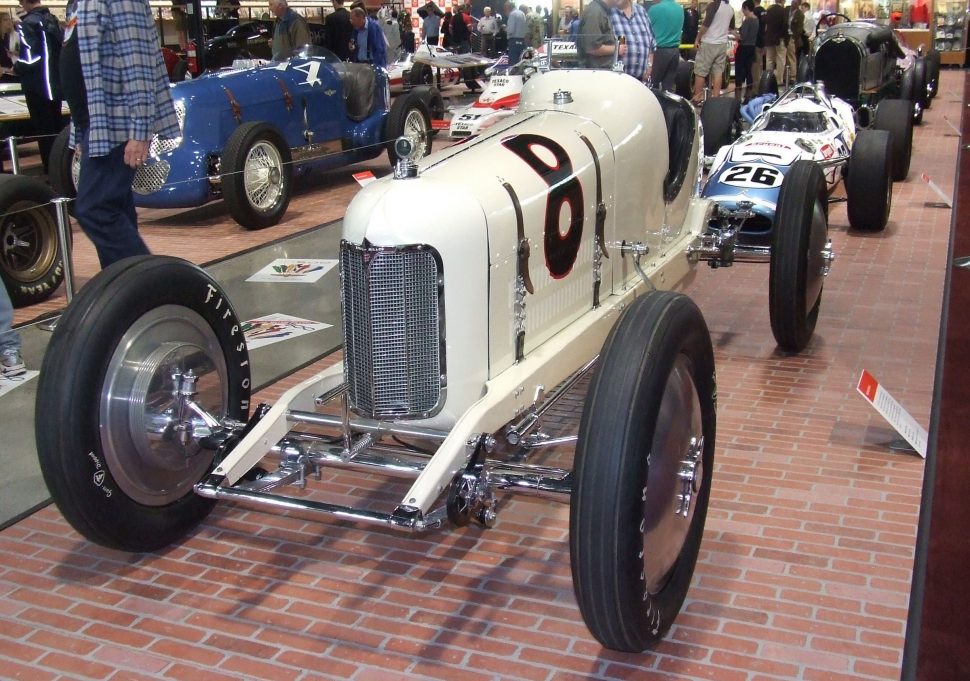 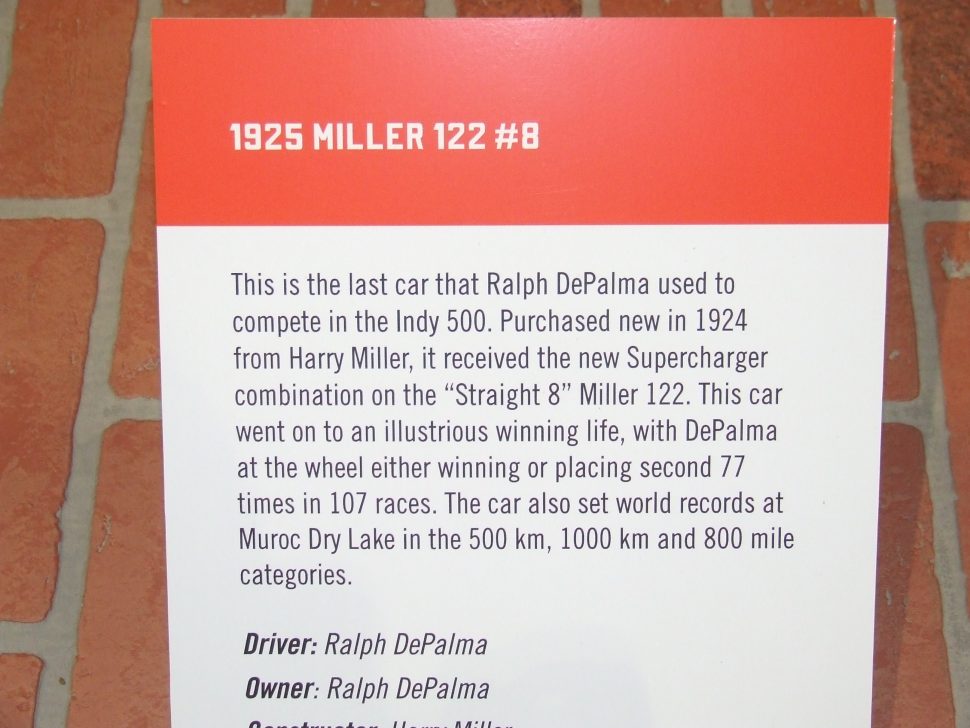 An example of the museum’s comprehensive signage.

To see Indy Cars from nine – count ’em – nine decades is something that one would expect to see only at the Indy 500 track museum itself. Many are from also-ran teams that never finished the race, but they, too, are part of Indy history. Of the 33 cars in the display, 12 were running at Indy during the historic car laps this year. The display was assembled with the help of the Indy 500 museum in Indianapolis (which located 11 of the cars), and was spurred by the interest of the car owners in being a part of such a unique event. This display alone makes the World of Speed worth a visit. 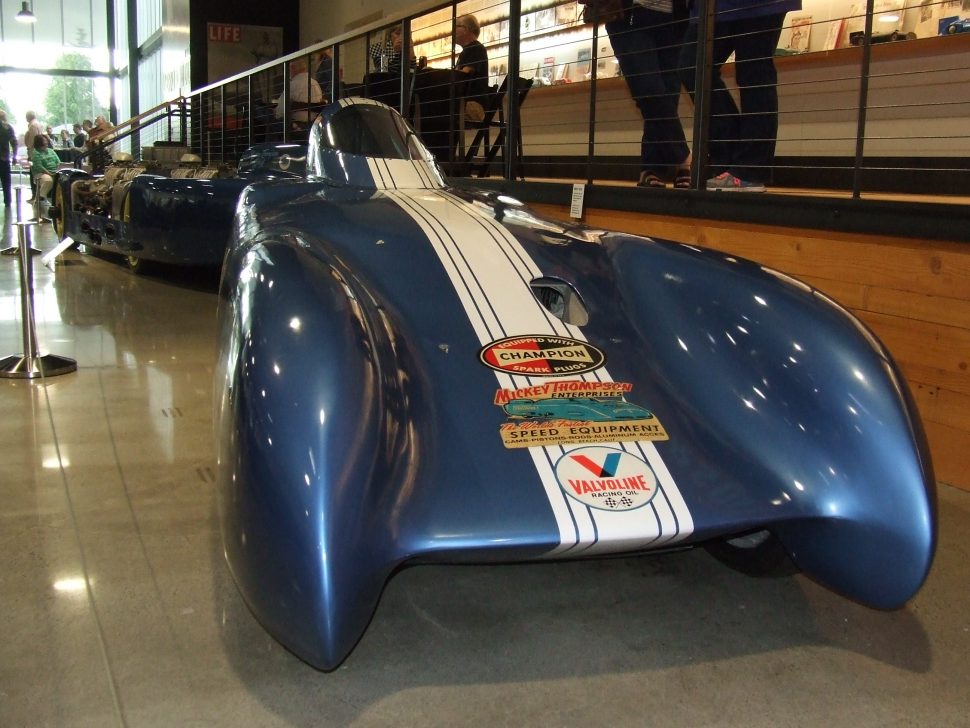 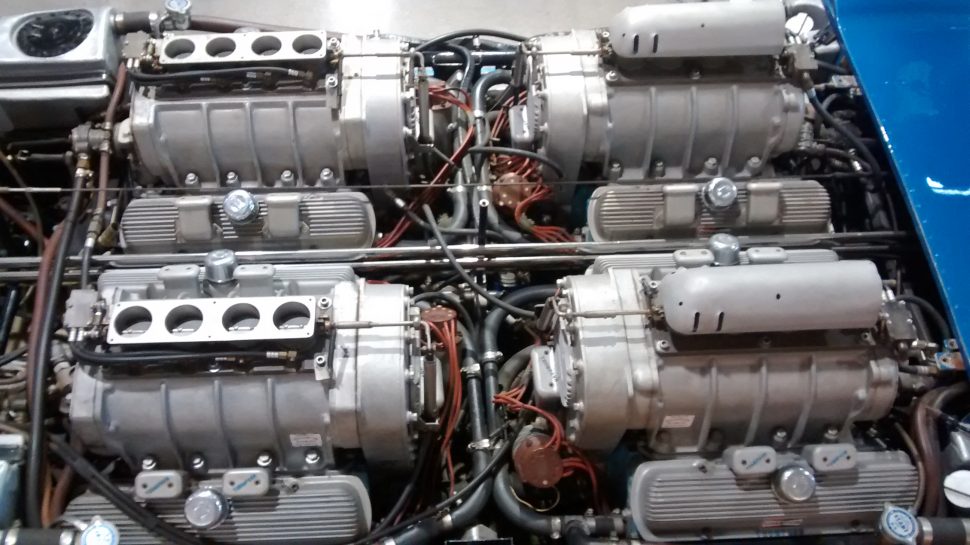 Because four blown Pontiac V-8s are better than one.

Over to one side against a wall and below a walkway exhibit of Land Speed Record attempts, there are four of the actual LSR cars driven by Mickey Thompson at Bonneville. From the blown two-cylinder to the four-engine (each a blown Pontiac V-8) monster that did the first run at over 400 MPH but missed the official land speed record, they are here, along with static displays of engines and paraphernalia associated with the attempts. One can look straight down into the engine bay of the big car and be amazed at the engineering that went into that attempt. 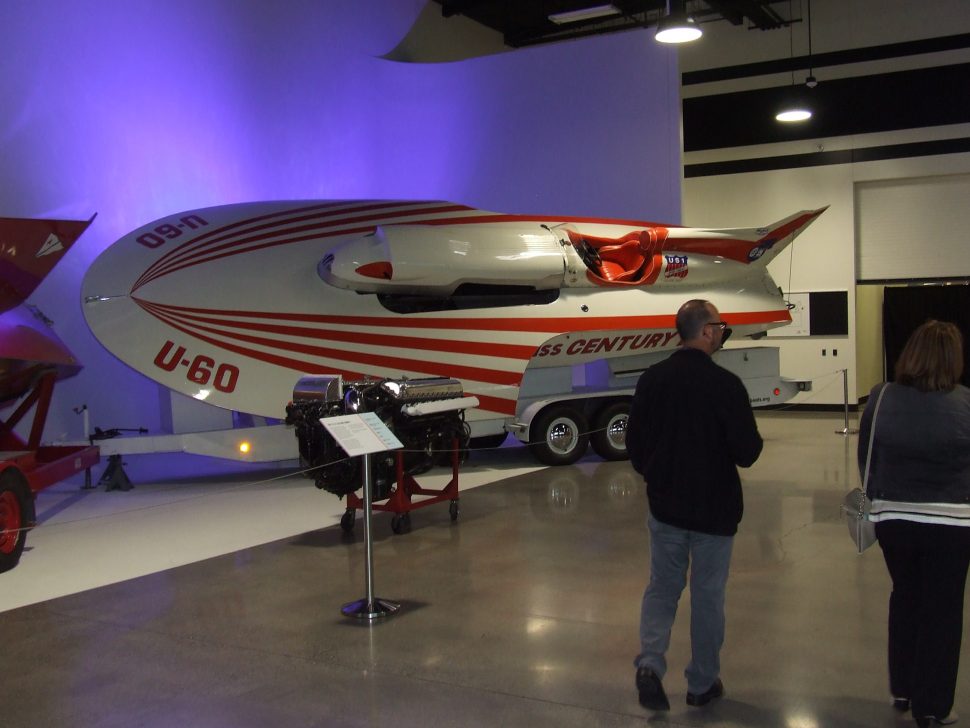 There’s still more. The two front-engine, piston-driven hydroplanes take up a wall, impressive in their size alone. Piloting one on a choppy lake must have taken, in the words of David Hobbs, “particularly large attachments.” 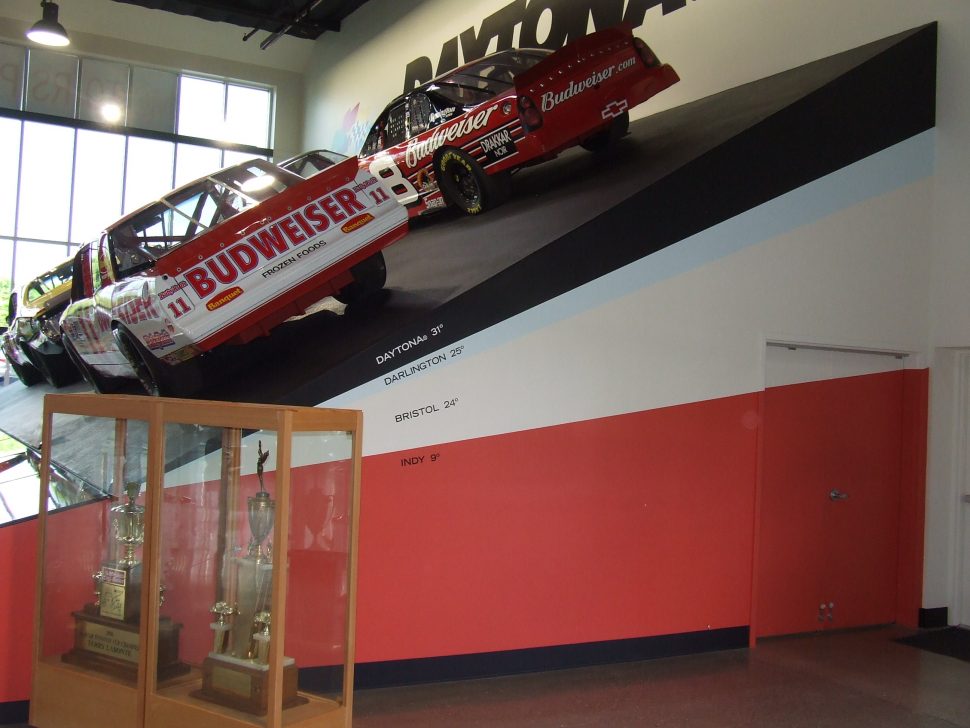 There’s a display of four NASCAR stockers mounted on a high wall at the same degree of banking as Daytona, accompanied by a graph showing the bank angle of Daytona compared to other tracks. Two more stockers can be examined more closely on the floor, and static displays of other racing machines range from old Can-Am cars right down to an often-raced Crosley Hotshot. 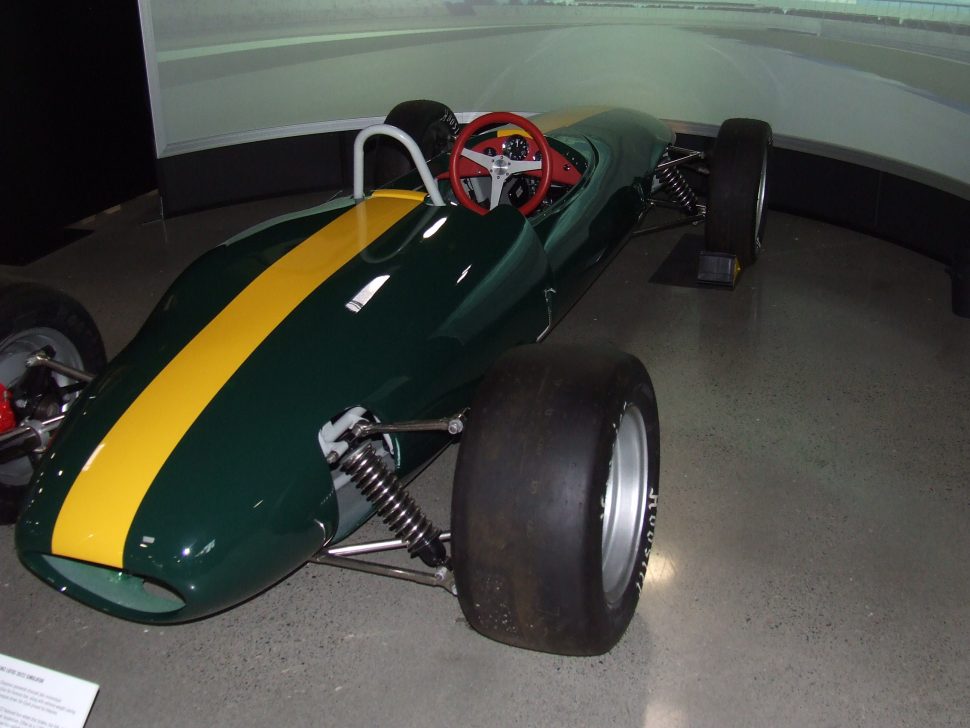 Those seeking a more visual (and visceral) racing experience have their choice of three simulators, including a Formula Junior Lotus 20, a NASCAR Ford Taurus, and Adrian Fernandez’s 1995 Lola Indy Car. Adding to the realism, the user sits in the actual cars, and not in an enclosed booth. 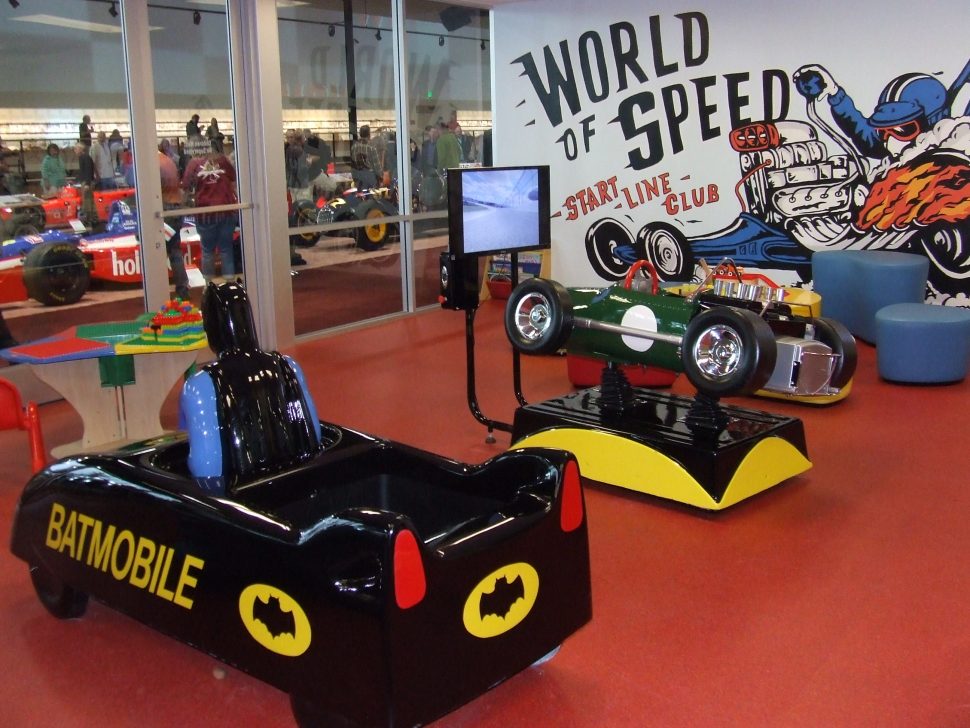 For visitors with kids, there’s an educational area cleverly designed as a play facility. In the “Start Line Club,” kids will find a bunch of fun things to do while their parents tour the exhibits.

There’s a growing archive of memorabilia from past racing eras, including the entire collection of local driver Art Pollard, a bunch of shop manuals, original movie posters of car movies back to the ’30s, an entire – as in 100 percent complete – collection of Hot Rod magazines, and every single one of the original Indy 500 programs. It is climate-controlled and protected by a state-of-the-art fire suppression system that, if triggered, will still protect the documents and exhibits from damage. 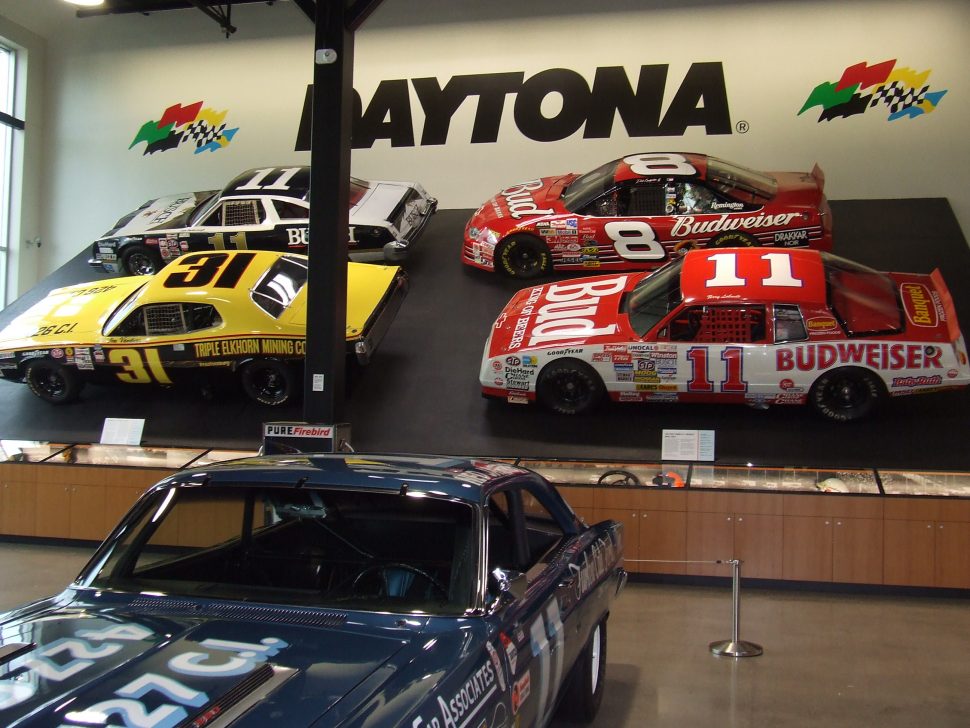 If that were all it was, it would still be a world-class museum, but the Banys’ vision extends well beyond that.

By arrangement with four local school districts (six will be involved next year) the World of Speed hosts automotive shop classes for 80 kids per week. They take two months of classroom instruction, then with six cars donated by local dealers, work on actual problems in the shop space. Next year, they anticipate the program will grow to 110 students per week. 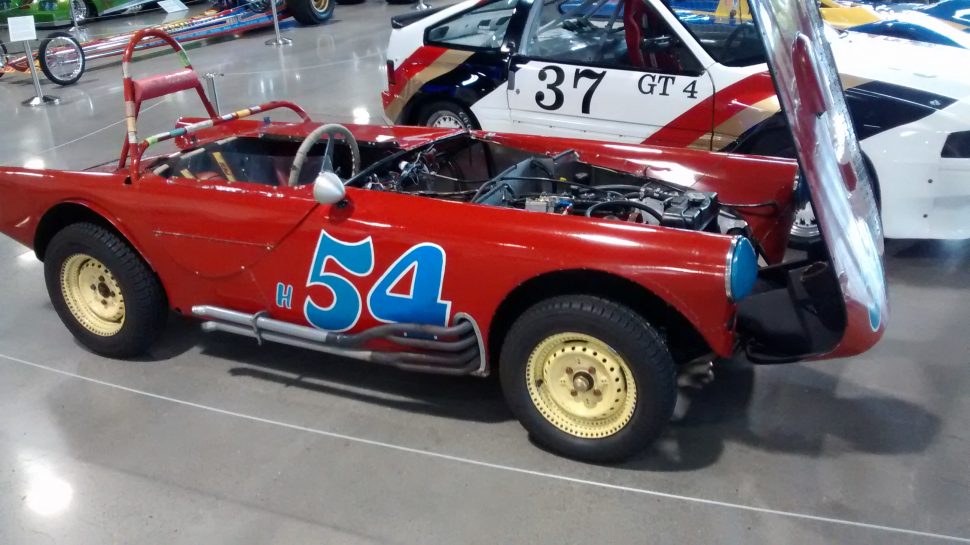 The museum covers all forms of racing.

At 8:00 a.m. on Saturday mornings, the World of Speed hosts the local Cars & Coffee informal cruise-in, and it’s not unusual to have nearly 200 cars on the grounds for a couple of hours.  Some of those cars are breathtaking, but as with all Cars & Coffee events, it’s What Ya Brung that matters.

There’s still more in the works, but one gets the idea. The plan is to make the World of Speed THE premiere site for auto racing enthusiasts on the West Coast, and the Banys are well along in making that real.

If you plan to be anywhere near the Pacific Northwest in the coming months, a visit is well worth the time. For more information on the museum, visit WorldOfSpeed.org.