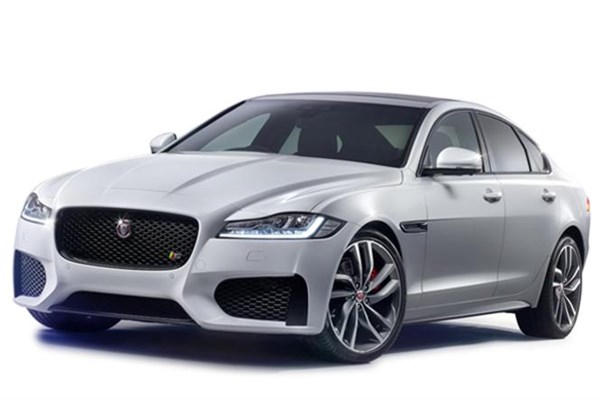 Replacing a car that heralded a fresh, new start for a brand is quite an ominous task but it’s the one facing the all-new, second generation Jaguar XF saloon.

The latest mid-sized Jaguar saloon is a more careful evolution of the four-door coupe shape, but it’s one that remains dramatic and bristling with subtle detailing.

It remains more athletic than its key rivals too such as the Audi A6, BMW 5 Series and Mercedes-Benz E-Class, let alone a more leftfield choice like the Lexus GS.

Despite being fractionally shorter and lower than the outgoing model, the latest Jaguar XF is significantly more spacious, thanks in a large part to a 51mm longer wheelbase, liberating more space for rear seat passengers . A 540-litre boot is also a welcome benefit.

It doesn’t set new class benchmarks for cabin roominess but it’s now capable of carrying two six-foot-tall adults in the back without them feeling cramped.

Not only is the cabin more spacious, it’s made to feel airier too, thanks to a greater glass area, which includes a third side window just behind the rear doors; it makes the back seat feel noticeably less claustrophobic.

The new Jaguar XF is 190kg lighter than the outgoing model and the entry-level diesel model tips the scales 80kg lower than its nearest competitor.

From launch there are four new engine options, three of which are diesels.

Captivating performance isn’t what these XFs are all about though. Low running costs are the focus: choose the 161bhp diesel with the standard six-speed manual gearbox and Jaguar claims an average of 71.7mpg and CO2 emissions of 104g/km – the lowest in this segment for a non-hybrid powertrain.

Both versions are available with the excellent eight-speed automatic too, which Jaguar expects to be the most popular option for the XF when combined with the 178bhp engine. Even in this guise 65.7mpg is claimed, with emissions of 114g/km.

More performance is on offer with S specification Jaguar XF saloons – both are 3-litre capacity V6 engines, one a twin-turbo diesel, the other a supercharged petrol shared with the F-Type, producing 296bhp and 375bhp, respectively. The eight-speed automatic is the only transmission choice with these two.

Both will reach a governed 155mph, with the petrol version completing the 0-62mph sprint in 5.4 seconds, a second quicker than the V6 diesel.

Outright efficiency isn’t the petrol’s strong point – 34mpg and 198g/km of CO2 reinforce that – but the diesel could well be within the budget of many motorists with a claimed 51.4mpg and emissions of 144g/km.

Jaguar has embraced the benefits of the XF’s light, stiff body to enhance the car’s handling and, despite its size, it feels nimble and lithe as you scythe through challenging bends.

There’s an electric power-assisted steering system too that not only delivers an impressive degree of feel through the wheel it improves fuel efficiency by three percent over a conventional hydraulic alternative.

Further, there are adaptive dampers to vary the sportiness of the handling, without compromising comfort and a much-needed overhaul of the XF’s infotainment features, with two versions of Jaguar’s InTouch system available.

Find out more about why we rate this executive sports saloon so highly by reading the Parkers full Jaguar XF review.