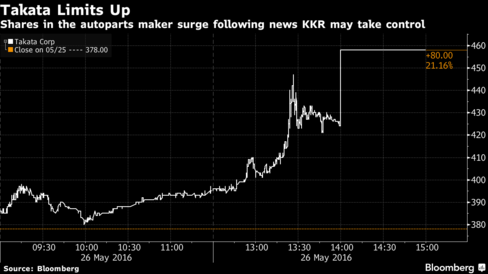 The Topix finished at 1,342.87 in Tokyo, erasing earlier gains of as much as 1.1 percent as about nine shares advanced for every eight that fell. The Nikkei 225 Stock Average climbed less than 0.1 percent to 16,772.46. The yen added 0.4 percent to 109.74 a dollar, while Brent crude traded at the highest level in almost seven months.

“The U.S. economy is stable despite the higher yields and stronger dollar,” said Nobuhiko Kuramochi, head of investment information at Mizuho Securities Co. “If the outlook for U.S. corporate profit in the second half of the year doesn’t change, we could see U.S. stocks rise further — if that happens Japanese shares could also be pushed up.”

Mitsubishi Motors Corp. climbed 5.3 percent to be the biggest gainer on the Nikkei 225. Haseko Corp. rose 5.2 percent after Daiwa Securities Group raised its rating on the builder to buy from outperform. Takata Corp. surged 21 percent, the daily limit, after the Nikkei newspaper reported KKR & Co., a private equity firm, may support and take control of the company responsible for the biggest safety recall in auto industry history.

Shippers suffered the biggest losses on the Topix, with Mitsui OSK Lines Ltd. down 4 percent. Softbank Group Corp. sank 3.7 percent after Alibaba Group Holding Ltd. fell the most in four months as the e-commerce giant said it’s being investigated by the U.S. Securities and Exchange Commission over its accounting practices and whether they violate federal laws. Softbank owns large equity stakes in Alibaba Group.

Traders are now pricing in a 34 percent chance of a June U.S. rate increase, up from 4 percent at the start of last week. Bets for a July move have jumped to 54 percent from 19 percent.

Japanese Prime Minister Shinzo Abe is hosting U.S. President Barack Obama and other Group of Seven leaders in talks from Thursday at a secluded resort on Kashiko Island, 190 miles southwest of Tokyo.

“Of course investors want to see what the effects will be from the summit,” said Masaaki Yamaguchi, a Tokyo-based equity market strategist at Nomura Holdings Inc. “But there are other issues after the summit – delays in the sales tax hike, the possible dissolution of parliament. Investors want to gauge those issues as well.”

Futures on the S&P 500 Index slipped 0.1 percent. The underlying U.S. equity gauge rose 0.7 percent on Wednesday, climbing to the highest level in almost a month.