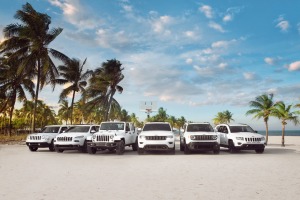 Two of the three commercials in the new campaign star Paul George, the USA Basketball and Indiana Pacers superstar.

The first spot, “4×4 Summer,” celebrates the season with shots of friends going on adventures during the long days and enjoying some fun late nights, with a few basketball moves by George thrown in for good measure.

In the second ad, “What I Stand 4,” George is shown with family and friends as he talks about his basketball journey, what inspires him and what summer means to him.

Both commercials, which are part of a larger print, digital and social media campaign, end with the tagline, “The Official Vehicles of Summer.”

Said Mike Manley, head of Jeep Brand, in a statement: “Positioning the Jeep brand’s 75th Anniversary Special Edition lineup as the official vehicles of summer gives us the opportunity to celebrate this brand achievement and highlight the open-air freedom that enables consumers to go out and enjoy the season to its full potential.”

A third ad in the campaign, “4 New Perspective,” which features a celebration of Hispanic culture, just debuted this week and, Jeep says, continues the theme of the global appeal of the brand.

Edmunds says: Jeep calls dibs on summer fun, something that should appeal to the legions of Jeep fans out there.