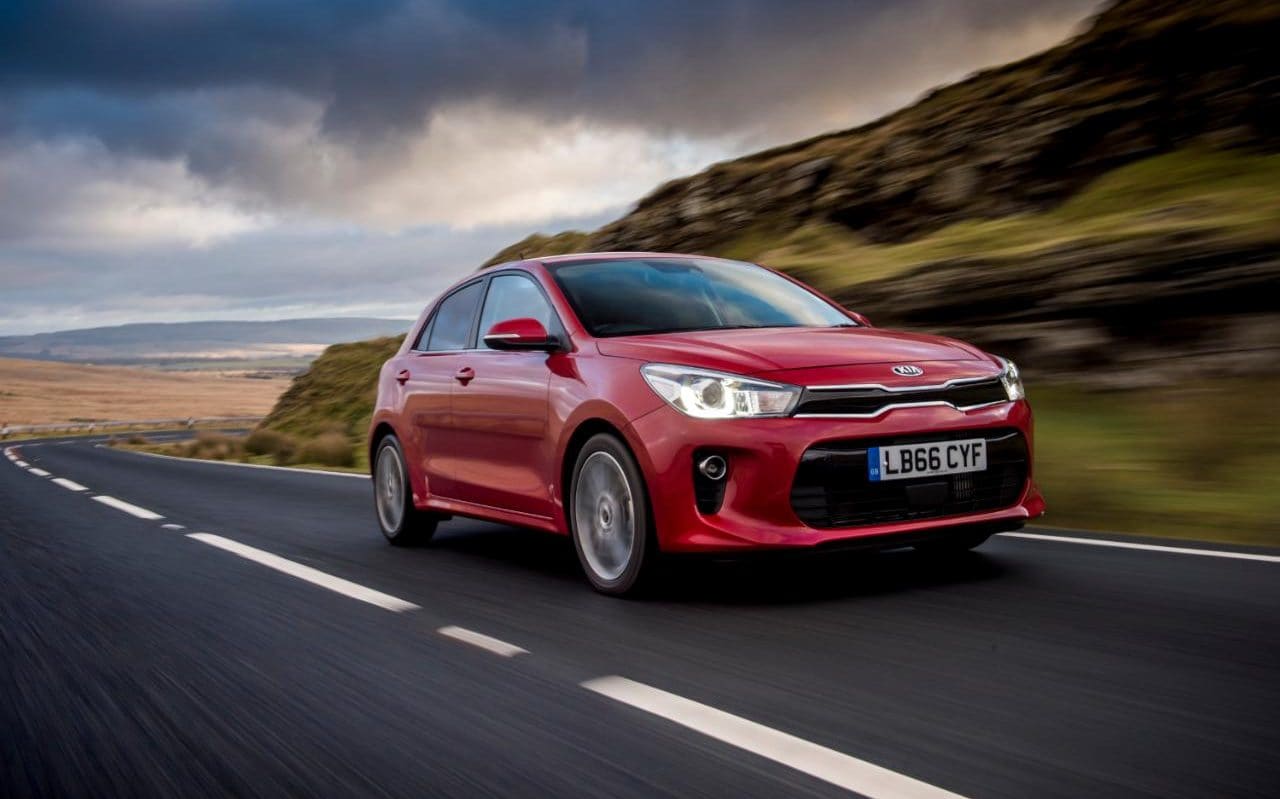 Kia Rio review: as fabulous as a Fabia?

The Kia Rio is a small five-door hatchback that serves as a rival to the likes of the Ford Fiesta, Vauxhall Corsa, Hyundai i20 and Skoda Fabia. It uses a range of petrol and diesel engines that promise to deliver good performance and low running costs, to which Kia adds its standard seven-year warranty and one of the roomiest interiors in the class.

Not the best in class, but above average The Rio isn’t quite as spacious as a Skoda Fabia, but it’s really not far off. The boot will accommodate smaller baby buggies (for larger versions you’ll still need to remove a wheel) or a couple of medium-size cases, although you don’t get the option of a false boot floor to divide the load space like in some rivals. This is a shame because the Rio’s load lip is quite high and there’s a big ridge in the floor when you fold the rear seats.

Space for those in the back is impressive, with just enough room for one tall adult to sit behind another and plenty of head room, too. The lack of a lump in the middle of the floor is also good news if you want to carry three in the back, and the fact the rear doors open wide means access is good.

Lots of storage in the front (including a big glovebox) completes what is a pretty spacious package for this class of car.

Let down by an overly firm ride Kia has got the basics right with the Rio by offering a decent amount of adjustment in the seat and steering wheel, while the seats themselves feel stand up well to long journeys, despite lacking an adjustable lumbar support.

The engines aren’t overly vocal either, whether you choose a petrol unit or the 1.4-litre diesel. In fact, the thrum of the 1.0-litre engine is quite pleasant.

What lets the car down compared with a Skoda Fabia or Hyundai i20 is the firm ride and excessive road noise, with the rear in particular seeming as though it needs more sound deadening material. On 16-inch wheels the Rio fidgets over low speed bumps and thumps through potholes, and upgrading to 17-inch rims makes things significantly worse. 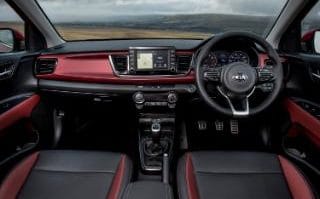 While the dashboard materials are all rather hard, the textured finish means they don’t look at all cheap and the clear dials and responsive touchscreen (five-inch on “2” spec models, seven-inch on “3” spec and above) both look smart and are easy to read.

The separate heater controls look quite Audi-like in design, but are not as tactile to use.

Shouldn’t give you any significant problems 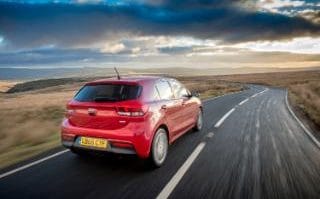 The Rio’s controls might be very light to operate, but they also lack the feel you get from a Ford Fiesta or Skoda Fabia, so it’s not as intuitive to drive as those two rivals, That said, it’s still a small car with good visibility (save for the usual over the shoulder blind spot), so you shouldn’t find parking a problem, particularly as all but the basic version have not only rear proximity sensors but also a reversing camera as standard.

The engine line-up includes 1.2- and 1.4-litre petrol units carried over from the previous generation Rio, but while these are fine around town it’s still worth spending more to get the newer 1.0-litre turbocharged unit, which has noticeably superior mid-range pulling power, whether you opt for the standard output or the more powerful version.

The 1.4-litre diesel also pulls well, although like all Rios is matched with a slightly notchy manual gearbox.

If you want a Rio with an automatic gearbox it means going for a rather dated, if robust, four-speed unit.

A Ford Fiesta is still the best in this regard The most entertaining model in the Rio range is the higher-powered 1.0-litre turbo, which uses a six-speed manual gearbox to give brisker acceleration. Even that, though, lacks the involvement you get with any Ford Fiesta, largely because the steering feels very remote.

Body lean is, however, well controlled, and there’s plenty of grip to rely on, even if you have no feel for it through the controls.

Modern Kias have an excellent reputation

The latest Rio is too new to have been included in the 2016 JD Power UK Vehicle Dependability Survey, but its predecessor has a good record and Kia as a brand performed very well, finishing third out of 24 manufacturers.

You also get the reassurance of a seven-year, 100,000-mile warranty, whereas Skoda provides only three years or 60,000 miles of cover. On paper the Kia Rio looks to be extremely economical, with all models returning more than 58mpg in official EU fuel tests. The best performer is the 1.4-litre diesel with 76bhp, which managed 80.7mpg, while of the petrol engines it’s the 1.0-litre 99bhp unit that leads the way at 62.8mpg.

Our tests of these two engines (admittedly with limited miles on the clock so not at their optimum in terms of delivering the best economy) showed that the diesel managed between 55-65mpg in normal driving, while the petrol returned between 44-50mpg, placing them marginally behind the Skoda Fabia in normal driving.

The days of Kias being sold at bargain basement prices are long gone, but the Rio is still at the more affordable end of the price scale for the engines and specs on offer. Provided you steer clear of the dated four-speed automatic CO2 emissions are low across the range.

Leasing costs aren’t quite as competitive as you’ll find for a Ford Fiesta, but the seven-year warranty does help to keep residual values robust and Kia’s fixed-price servicing plans represent good value for money.

All models are offered with autonomous emergency braking 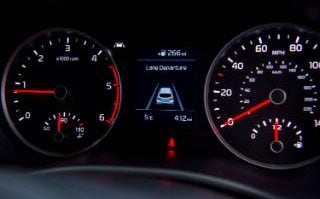 Kia is one of the first manufacturers in this segment to offer an autonomous emergency braking system across all spec levels (it is an option on “1” models and standard across the rest of the range). These kind of systems monitor the road ahead and can warn the driver if a collision is imminent. If the driver fails to respond the system can then automatically apply the car’s brakes to avoid or at least minimise the impact. Such systems have been shown to reduce front into rear crashes by almost 40 per cent, and are thus viewed favourably by insurers.

Lane departure warning is also standard on “2” spec models and above, while all Rios are fitted with an electronic stability programme to help you regain control if the car begins to skid.

Worth upgrading from the basic model 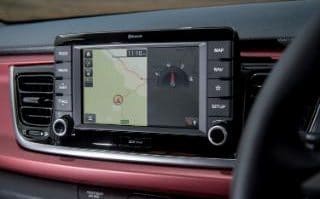 Opting for 3 increases the size of the wheels from 15- to 16-inch and introduces a 7-inch touchscreen with satnav and full smartphone connectivity (Apple CarPlay and Android Auto), climate control and faux leather upholstery with heated seats.

The highest spec Rio is badged as the First Edition and adds 17-inch alloys, keyless entry and the more powerful 1.0-litre petrol engine with six-speed gearbox to the already well equipped 3 model, although it does start to look quite expensive.

Options you should add: Metallic paint (£495)

The Kia Rio might not be the most fun car to drive in its class, or as comfortable as some rivals, but it scores well most other areas, whether it’s in the space on offer, the low running costs, excellent reliability record, or value for money.

For more tips and advice, visit our Advice section, or sign up to our newsletter here