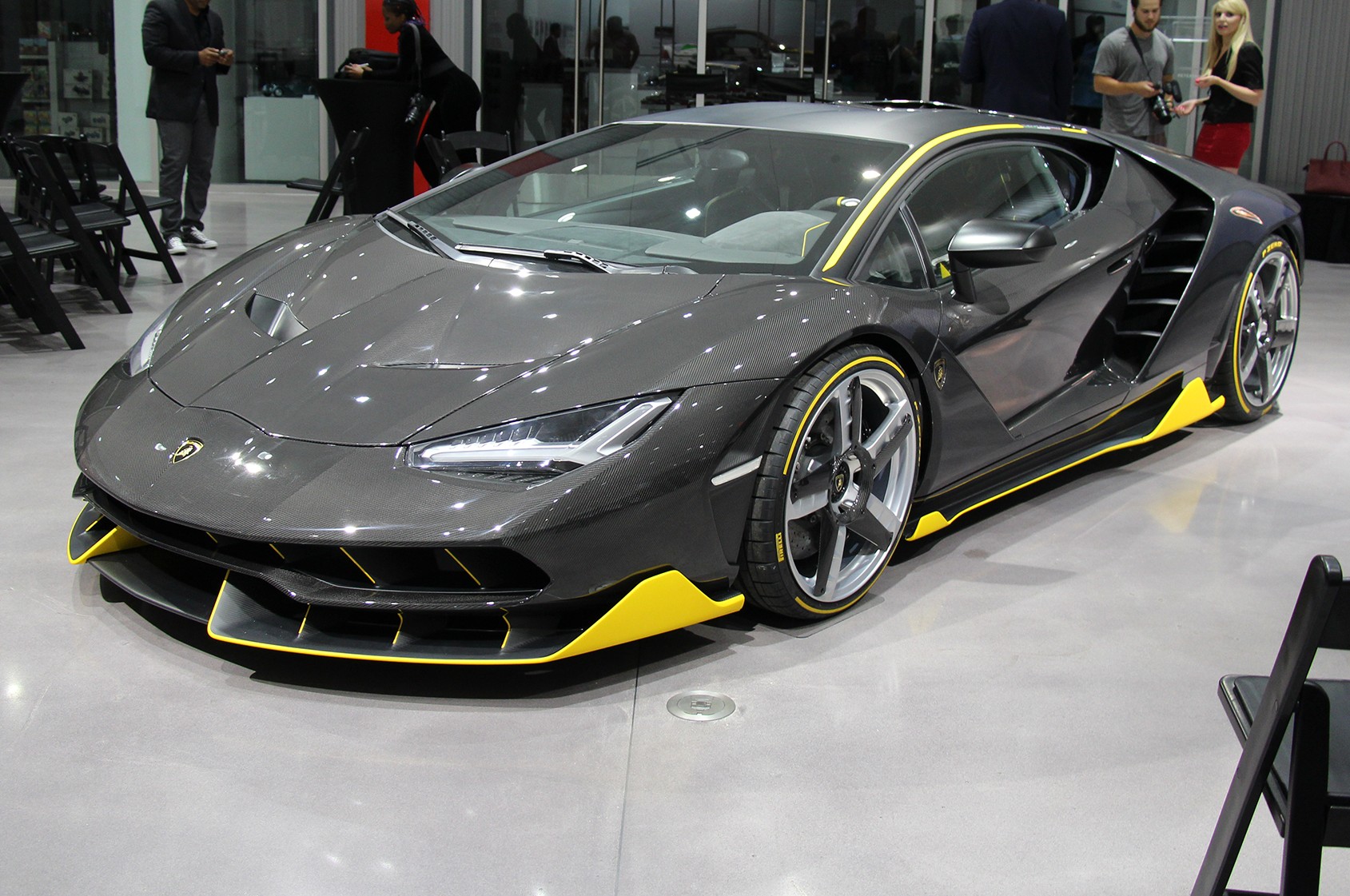 The Lamborghini Centenario made its official U.S. debut at a small event at the Petersen Automotive Museum in Los Angeles, Calif., in front of current Lamborghini owners and members of the press. In total, only 40 examples will be built, 20 coupes and 20 roadsters, and all were spoken for before production even started. The car, which first debuted this year at the 2016 Geneva auto show, celebrates the centennial of Ferrucio Lamborghini’s birth and Lamborghini’s history.

On hand to reveal the ultra-exclusive supercar was Automobili Lamborghini America chief operating officer Alessandro Farmeschi, who spoke about the automaker’s history and what the Centenario means to the brand as the most powerful vehicle it has produced. Alongside Farmeschi was Alan Hartman, head of Turn 10 Studios, producer of the popular racing game Forza Motorsport. Once the covers were lifted, the Centenario drew an instant applause from the audience and people were immediately struck by how aggressive the car looks with its large intakes, fins, splitters, and spoilers, which help improve the car’s stability at high speeds. The Centenario’s interior also drew a lot of attention because of the exposed carbon fiber pieces, extensive use of Alcantara, and yellow accent stitching and piping that brighten up the entire cabin. 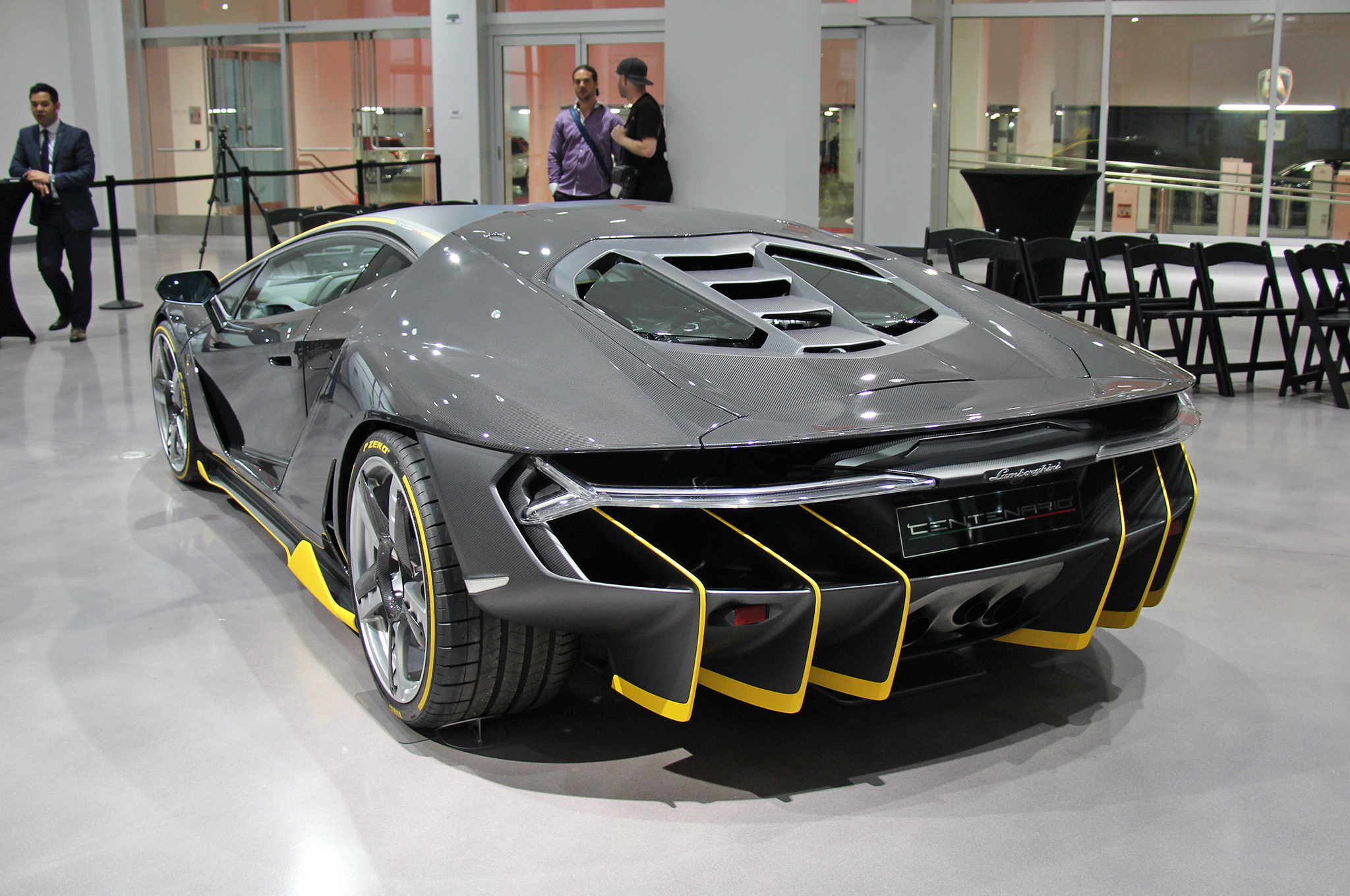 Made extensively of carbon fiber, the Lamborghini Centenario weighs 3,351 pounds and shares most of its underpinnings with the Aventador. Like many other Lambo products, the Centenario routes its power to all four wheels. A 759-hp 6.5-liter V-12 engine paired to an Independent Shifting Rod (ISR) transmission is the only powertrain combination available, making it the most powerful Lamborghini thus far. The Centenario’s cabin is trimmed extensively in Alcantara and features a 10.1-inch touchscreen that comes with features such as navigation and Apple CarPlay. Even though it’s already extremely exclusive, Lamborghini will allow Centenario owners to customize the car’s interior and exterior design according to their wishes. Out of the 40 cars that will be produced, we learned that three will be coming to Los Angeles, all of which were ordered at Lamborghini of Beverly Hills. The dealership’s representative didn’t disclose what body styles were ordered.

In person and up close, the Centenario is even more striking than the already attention-grabbing Huracan and Aventador. Its all-carbon-fiber body in black and yellow accents imbues a feeling of aggression while its front fascia with thin headlights with LED strips and crazy flying buttresses means you won’t mistake it for any other car on the road. As with every Lamborghini, the Centenario is low, wide, and aggressive, and that look is amplified even more with the aero kit that includes low-mounted side skirts and a yellow-accent front splitter. Out back, the Centenario is just as aggressive with six fins flanking the three exhaust outlets. An LED light strip runs the entire length of the car’s rear end while the split rear windows, which are partially open, let you peek in and see the exposed engine.

The interior is just as expressive as the exterior, with a 10.1-inch touchscreen adorning the center stack. Just below that are the multimedia interface controls and the start/stop switch. A fighter jet theme exists throughout the Centenario’s Alcantara- and carbon fiber-covered cabin and makes it feel driver-centric. 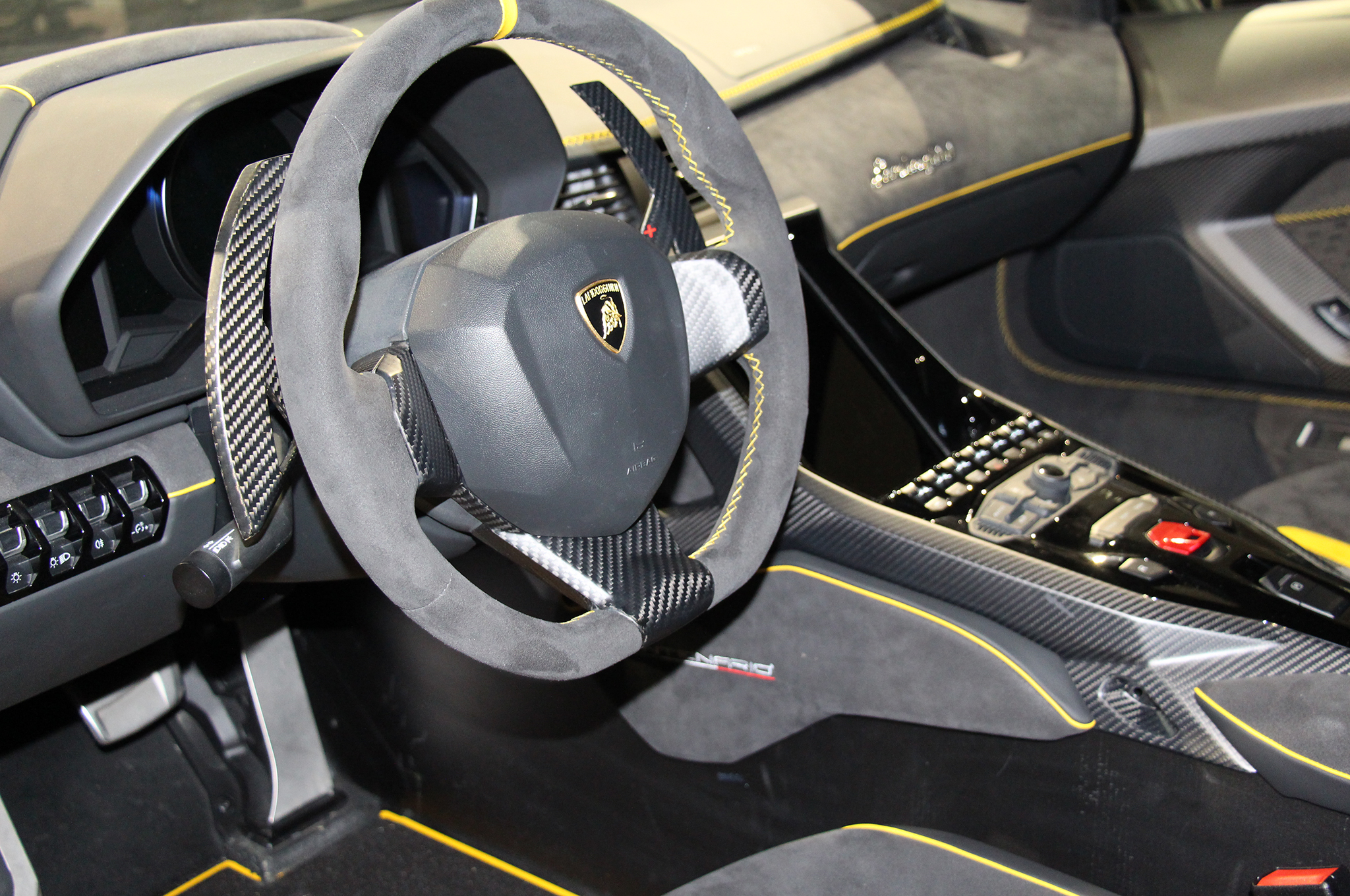 At the Centenario’s North American debut, Lamborghini also took the opportunity to announce its partnership with Microsoft Studios and Turn 10, the fruits of which can be seen in the latest trailer for Forza Horizon 3. The automaker continues its centennial celebration by announcing that some of its most iconic vehicles will be featured in the next Forza Motorsport installment and that the Centenario will take center stage as the franchise’s next cover car. Before introducing the people responsible for the Forza Motorsport series, Lamborghini showed a video showing the vehicles that will be featured in the game, which include racing game staples such as the Diablo, Countach, Gallardo, Murcielago, Huracan, and the legendary Miura.