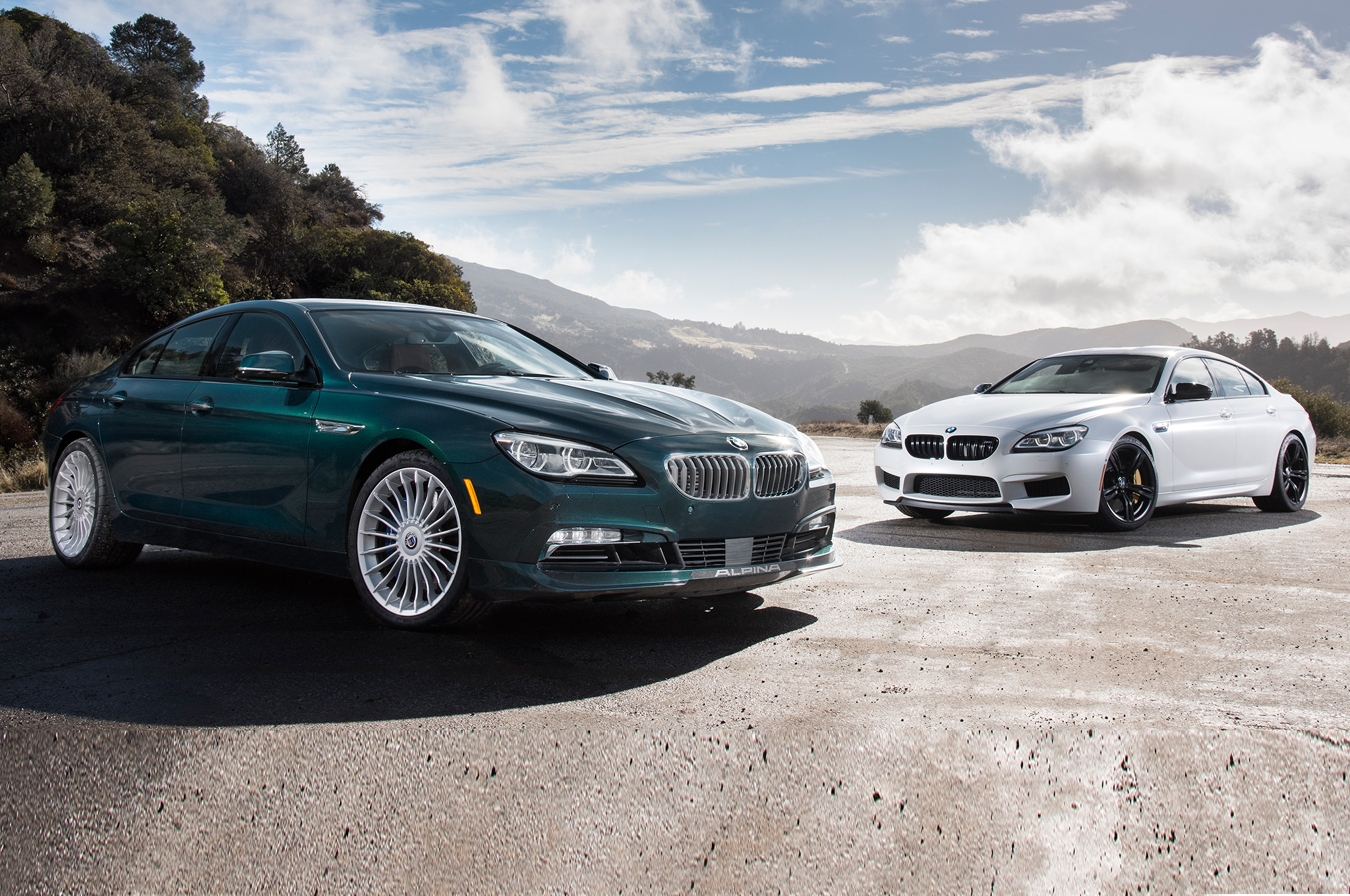 Every car is defined by a series of compromises, tradeoffs, and decisions that achieve one goal at the expense of others. The performance derivatives of the BMW 6 Series Gran Coupe define compromise—whether to emphasize style over function.

We just can’t decide which set we like better. There are two Gran Coupes fighting for the top spot: the M6 and the Alpina B6, both of which you can buy from a BMW dealership with a full factory warranty. Both wear the same sexy body. They have different engines, but in a weird parallel both are twin-turbocharged V-8s that crank out 600 tarmac-tearing horsepower. Even their base prices are similar. At a mere $3,400 apart, that’s a rounding error at their six-figure price points.

Yet despite the apparent similarities, these two BMWs are the products of different compromises. Everyone knows what an M car is. You expect the M6 Gran Coupe to pummel any racetrack, dominate any back road, and obliterate everything on the autobahn. But what’s an Alpina B6? For starters, here’s what it’s not: a tuner car. At least no more so than the M6.

Alpina is no fly-by-night organization, having celebrated its 50th anniversary in 2015—a milestone M won’t hit until 2022. We’ll forgive you if you’ve never heard of Alpina. After all, the company prides itself on exclusivity, and that means not selling tens of thousands of cars every year. But you need to pay attention from here on out because (spoiler alert) the Alpina B6 is a better car than the M6. But it took us testing them head to head to figure this out.

The case for M

Decades of automotive history have forged a clear idea of what an M car should be. M originally stood for Motorsport, so a car wearing its badge will trade some of BMW’s trademark comfort for performance. An M car will have a high-revving engine, rear-wheel drive, and immediate handling. It should have a manual transmission where possible, and if not, at least no torque converter. It should be lightweight to foster nimble handling, and although its high price will make it appeal to every attorney trudging through Beverly Hills, it should feel most at home on a lonely mountain road.

The M6 is mostly faithful to that M recipe. It has a seven-speed dual-clutch transmission, rear-wheel drive, and a relatively high-revving V-8 with an ingenious crossover exhaust manifold, which replicates the firing order of a flat-plane-crank V-8 to keep its two twin-scroll turbos on the boil. Think of that trick as the turbo-era counterpart to one of M’s oldest hallmarks: independent throttle butterflies for each cylinder.

The M6’s rear subframe is rigidly mounted to its body to sharpen rear-axle response. Our M6 tester included the Competition package, which further stiffens the M6’s already stout springs, dampers, and anti-roll bars. It then substitutes even tauter suspension bushings and swaps in a steering rack with a faster ratio than the regular M car’s. It wears 20-inch wheels with aggressive Pirelli P Zero tires, and it has optional carbon-ceramic brakes for added braking ability.

In other words, think M with even more attitude and less weight. In concert with other lightweighting (including a carbon-fiber roof), the M6 tipped our scales at 4,397 pounds. That’d be a lot were it not for the 600 hyperactive horses hiding under the scalloped hood.

Despite apparent similarities, these two are the products of different compromises.

As those numbers indicate, the M6 is a gloriously fast car—once the rear tires hook up. Or, we should say, if the rear tires hook up. This is not a given. When this 4.4-liter V-8 went into production, it was the most powerful production M engine ever, yet BMW boasted that the new generation of turbo M cars would continue the BMW M tradition of engineering a chassis that is faster than the engine.

That’s a load of horsepower manure. With 600 ponies assaulting the rear wheels, the M6 can barely move out of a parking spot without breaking rear-wheel traction. Senior features editor Jonny Lieberman joked that the perpetually blinking traction-control light in the M6 must be trying to flash out Ultimate Driving Machine in Morse code. Fact is, you’re more likely to get struck by lightning than launch an M6 properly from a stop.

Our expert testing team, after much swearing, frustration, and tire smoke, managed a blazing 4.0-second run to 60 mph. Shortly thereafter, the M6 screamed through the quarter-mile marker at 120.9 mph. And it’s not just a straight-line performer, either. The big BMW clung to the skidpad at 0.97 g, circling the figure eight in 24.3 seconds. Those are nearly sports car numbers.

The Case for Alpina

Guess what car produces similar numbers? Yep, the other 600-hp Gran Coupe. The Alpina B6’s slightly less aggressive Michelin Pilot Super Sport tires generate a skosh less grip (0.96 g), and as such, it requires another 0.2 second to round the figure eight.

But let’s talk about acceleration for a second or two. Or actually for 3.3 seconds. That’s how long it takes the all-wheel-drive Alpina B6 Gran Coupe to hurl itself to 60 mph. It accomplishes this with no wheelspin and no talent required from the driver other than introducing the right pedal to the carpet. 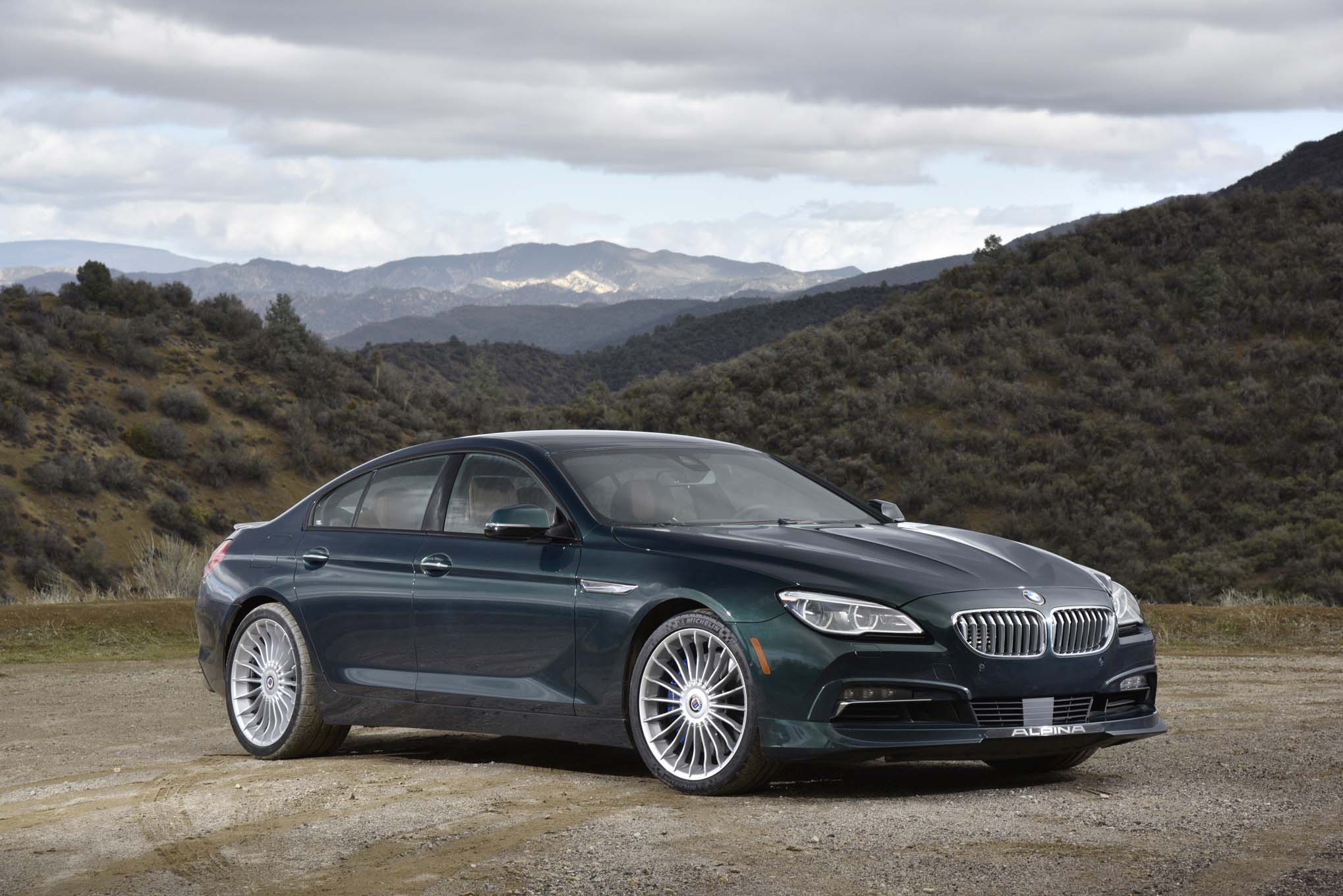 The B6’s quarter-mile performance (11.8 seconds at 116.6 mph) is impressive, but the M6 is only four-tenths behind, and because it’s traveling 4.3 mph faster, the M6 is catching up quickly. Indeed, if you line the two Gran Coupes up for a rolling highway-speed drag race, the M6 will walk away. That’s because of several factors. Firstly, the Alpina V-8 doesn’t respond as quickly; its exhaust manifolds are of the conventional variety, and each of its turbos receives exhaust gasses through just one scroll. Secondly, the B6 weighs 354 pounds more than the M6 in part due to that all-wheel-drive system, which robs some of the power going to the ground. As does its torque-converter automatic, which also shifts noticeably less quickly than the M6’s dual-clutch transmission.

Which is more useful in the real world: the ability to out-accelerate a city bus off the line or out-dragging a 600-hp sedan from 75 to 150 mph? Sorry, but we don’t have an autobahn in America, so the high-speed stuff falls into the “bragging rights” category. The Alpina’s tradeoffs are more appropriate for the real world.

That wouldn’t be the case if the M6 weren’t completely and totally overwhelmed by its own power. But it is, and that’s where it’s held back by the M-brand history, which dictates that the M6 needs both rear-wheel drive and more power than other 6 Series Gran Coupe models.

The Alpina B6 isn’t saddled with any of that history. In addition to the real-world plus of having four driven wheels, it benefits from a medley of other tradeoffs that make it a better road car. The B6’s ZF-sourced eight-speed torque-converter transmission is far smoother in everyday driving than the M6’s clumsy dual-clutch unit. Its hydraulically assisted steering is light and communicative, unlike the M6, whose steering was apparently tuned by marketing people who think that heavy means schporty. The M6’s three driver-selectable levels of power steering assist are equivalent to the system being low on fluid, completely out of fluid, or, in its sportiest mode, just plain broken. A harsh judgment, but a true one.

The Alpina’s rear subframe is isolated from the chassis with bushings, and as such, its occupants experience less road and impact noise. Although it rides on the same-size 20-inch wheels, the Alpina’s ride is far more supple than the M6’s. It soaks up bumps that have the M car bouncing and pogoing. Although its steering ratio is far slower (18.7:1 versus 12.7:1), the Alpina setup offers better on-center communication because it dances in your hands the way good BMW steering used to. The M6, by comparison, is mute on center, allowing the car to tramline to truck grooves, pavement seams, and the gravitational pull of Neptune.

The tradeoff—there’s always a tradeoff—is that above eight-tenths, the Alpina’s front end goes soft and gooey, where the M6’s is far more rigid and accurate. That’s mostly irrelevant because should you approach the limit in the M6, you’ll accidentally press the accelerator pedal four millimeters too far and wind up in a slide. Unwanted power-on sideways escapades are common in the M6, and they happen quickly.

The M6 even spooked Randy Pobst as he attempted to set a fast lap around Willow Springs International Raceway. He persevered and was able to lap the M6 2.2 seconds faster than the B6. But then Pobst did the unthinkable: He preferred the slower car. Why? The M6’s hastened lap times come at the expense of predictability. Pobst preferred the B6’s progressive demeanor, even on the track.

There’s one place where the M6 is a clear winner. Its start/stop system is, thanks to the dual-clutch automatic, far smoother and less intrusive than the Alpina’s. But that’s a lonely win. Overall, the M6’s motorsport emphasis just doesn’t work with a car this hefty. At least not as well as how Alpina has engineered its tradeoffs.