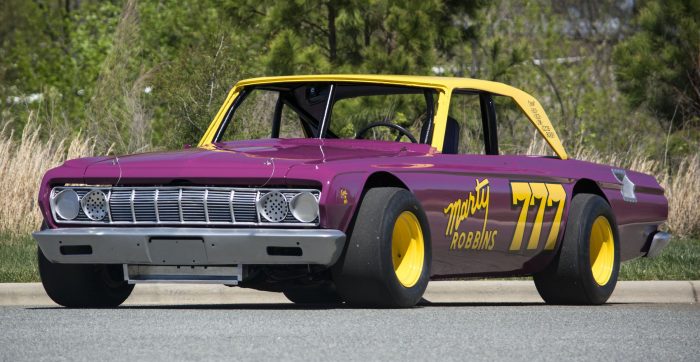 Marty Robbins may be best known as the country singer who amassed 43 top-10 records over a career that spanned three decades, but in his heart, he was a race car driver. Blessed with a surprising amount of talent behind the wheel, his NASCAR Cup career included 35 starts over 17 years, along with six top-10 finishes. Before (and during) his Cup days, Marty raced in Modified and Sportsman events at the Nashville Fairgrounds, and later this month one of his early cars, a 1964 Plymouth Belvedere recently restored by Ray Evernham, heads to auction for charity in Indianapolis.

Marty’s passion for racing began in his childhood, and when a career in country music brought him to Nashville, he quickly became a regular spectator at the fairground’s short track. By the end of the 1950s, Marty had purchased a car of his own, and the ’34 Ford five-window coupe, finished in purple and yellow and carrying the number 777, even graced the cover of his Devil Woman LP. As Marty’s racing skillset improved, he sought faster and faster cars, and by the middle part of the 1960s, a Plymouth Belvedere was the late-model car to have. While his Cup cars generally wore number 22 or number 42, his lower-division cars often wore number 777, and purple with yellow was his distinctive livery of choice.

As Marty’s son Ronny explained to ESPN in 2013, just prior to the car’s unveiling from its multi-year restoration, the 1964 Belvedere was the first racing car the family had built on its own. As a Modified car, calling it a Plymouth Belvedere is a bit of a stretch; though it wears an altered Belvedere body, this rides on a Chevy X-frame fitted with Chevelle front rails. Initially, power came from a 426 Hemi V-8, which required the placement of the radiator in the trunk (the reason the trunk lid is louvered). Later in the car’s career, it sported a 440 V-8 with a front mounted radiator, a setup that delivered more success. 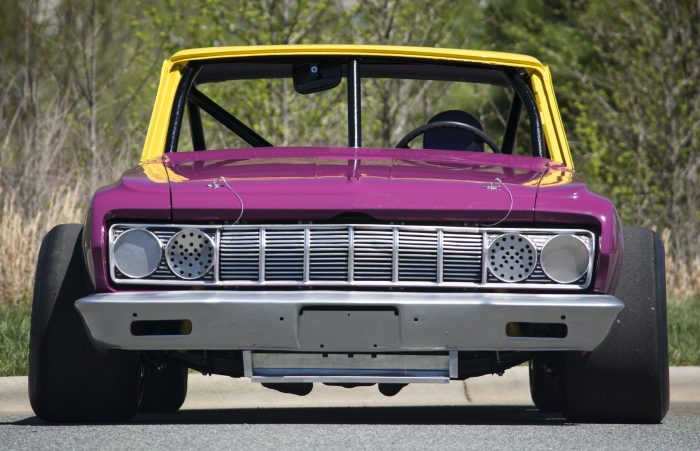 The Belvedere was Marty’s “home track” car, and he reportedly raced at the Nashville Fairgrounds as often as his schedule allowed. Busy with recording and touring in the early 1970s, Marty found the time to do a handful of Cup races per year, yet managed to earn the respect of professional drivers for his competitive spirit and his willingness to take advice. Richard Petty once said of Robbins, “Marty’s good for racing. We’re tryin’ to do this for a living and he’s just out for fun, and he realizes that.” 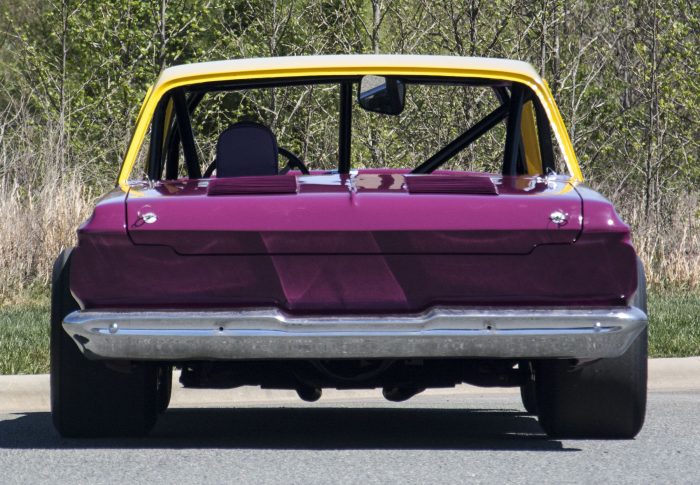 An example of this came during the 1972 Winston 500 at Talladega. Driving a Dodge Charger prepared by Cotton Owens, Marty astonished fans and fellow drivers alike by running race laps roughly 15 miles per hour faster than his qualifying speed. Afterward, NASCAR attempted to present him with the “Rookie of the Race” award, which Marty declined on the grounds that he’d cheated, busting out the restrictors in his carburetor for one simple reason: He wanted to know what it felt like to run at the head of the pack. 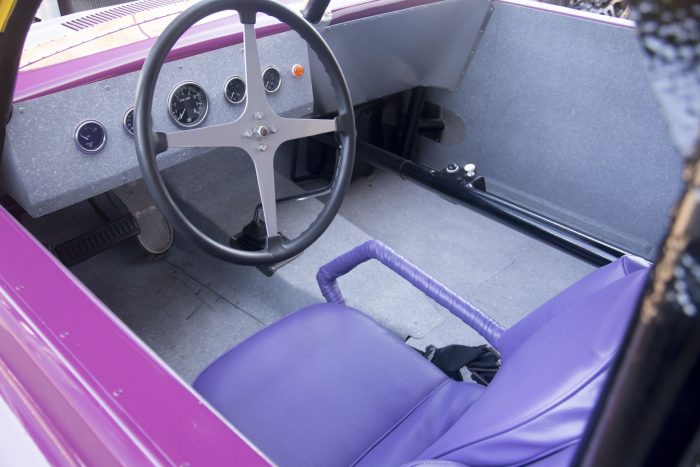 Marty Robbins died of a heart attack in December of 1982 (one month after his final NASCAR Cup start in Atlanta), and the purple and yellow Plymouth Belvedere that he’d raced in Nashville found its way onto the farm of his former bus driver. When the property was sold years later, the new owner crushed many of the vehicles on the land, but understood the Plymouth was special and worth saving. Advertised for sale, it was acquired by Al Jones, a man with a passion for Nashville racing history. 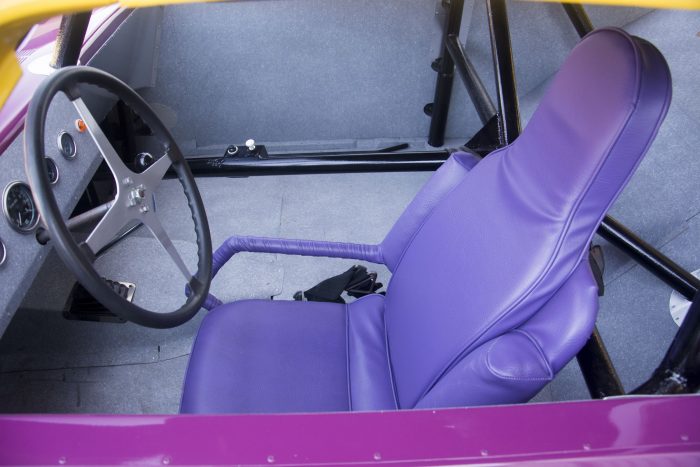 Later, intent on restoring the car, Al placed an ad in a local stock car publication seeking parts. As fate would have it, Ray Evernham subscribed to the same journal, and a deal was soon struck to buy the Plymouth, with the understanding that the restored car would make an appearance at the Nashville Fairgrounds.

From the onset, Ray and his team made every effort to preserve as much of the car’s originality as possible. Neither racing nor rust had been kind to the Belvedere, though, and as restored, the car retains the original frame, roll cage, seat, steering wheel and gas pedal. A replacement 426 Hemi V-8 was initially considered, but given that Marty had been more competitive with the larger-displacement V-8, a period-correct 440 was sourced instead. 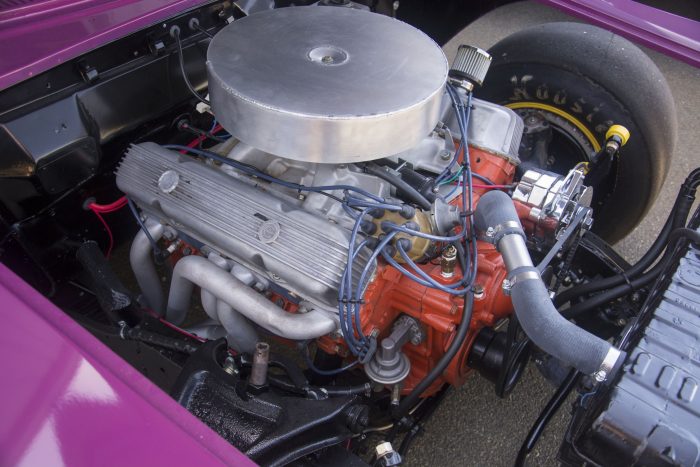 How detailed was the restoration? Marty’s son Ronny was consulted throughout, as was former owner Al Jones. A louvered trunk lid was no longer needed to keep the engine cool, but that’s the way the star campaigned the Plymouth with the 440, so that’s the way it was restored. Once the car was nearing completion, Ray even hired Ken Binkley, the sign painter who’d originally lettered the car over four decades earlier, to paint the names and numbers on the car. 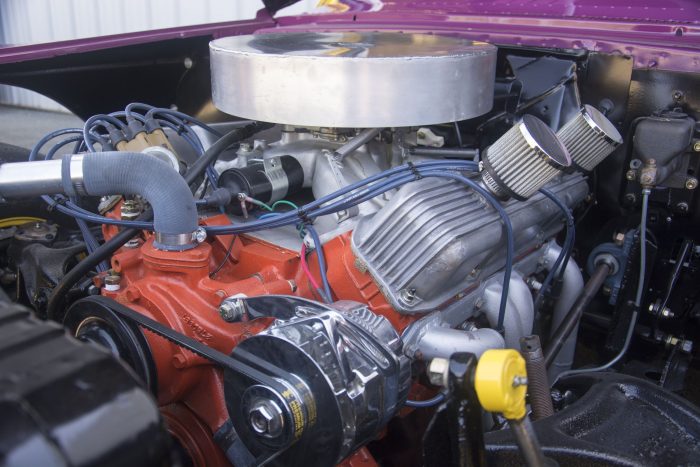 Marty’s old Belvedere made its promised return to Nashville in May of 2013, where it paced a short track race at Fairgrounds Speedway Nashville. Since then, it’s been a cherished part of Ray’s collection, but the time has come to offer the car to another collector, with proceeds from the sale going to the Evernham Family’s Racing for a Reason Foundation in support of The Autism Society of North Carolina. Motostalgia predicts a selling price for the Plymouth between $80,000 and $100,000.

The Indianapolis Brickyard Auction will take place on Saturday, June 18, at the Indianapolis Motor Speedway. For additional details, visit Motostalgia.com.