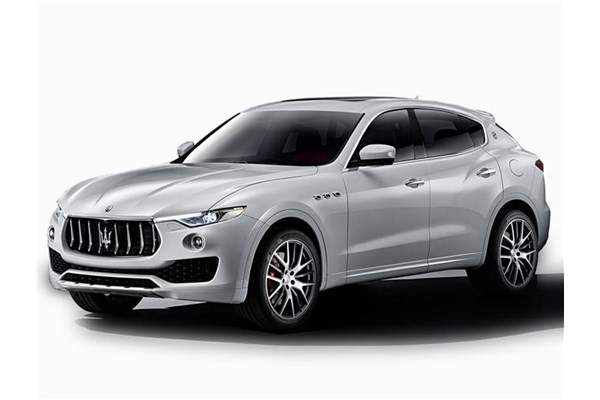 A hornet gargling TCP through a loud-hailer; routing MDF with a blunt powertool; rapidly opening and closing a soundproofed door on a soprano with stomach cramps…

These are the sort of high-revving V8-sponsored noises of which, tradition has it, inevitably accompany the rapid progress of any Maserati.

Perhaps, then, the biggest shock to the system appendent to the arrival of the new Levante is not the decision by the company to enter the increasingly glutted luxury SUV fray, but rather, the news that – targeting rivals such as the Porsche Cayenne, BMW X5 and Range Rover Sport – this latest trident-badged offering will only be offered with diesel power when it arrives in the UK in December 2016.

Not that there’s a great deal wrong with a 3-litre V6 punching out 271bhp and a wholesome 600Nm of torque whilst mated to an eight-speed automatic transmission and all-wheel drive, except that the Levante diesel panders to our ingrained perceptions of the aural accompaniment a Maserati should deliver about as much as a badger with whooping cough.

Ruthlessly benchmarked against Porsche’s improbably agile Cayenne, and, mercifully, not based on the Jeep Grand Cherokee platform as once intended, the Levante boasts a surfeit of aluminium in both bodyshell and suspension, and has the lowest centre of gravity in its segment along with near perfect 50:50 weight distribution.

Aerodynamic tinkerings include a front grille shutter system which opens for engine cooling purposes and closes to reduce drag, with the result that, overall, the Maserati’s shape is slippery enough to garner a best-in-class drag coefficient of only Cd 0.31. This equates to lowest-in-class wind noise at high motorway speeds, making it easier to hear the persistent roar of 20-inch rubber and that vociferous diesel engine.

The self-levelling air suspension features continuous damper control allied to a choice of five ride heights which hoist the bodyshell a maximum of 40mm above the normal 210mm ride height, or lower it by as much as 45mm for easier access and egress when parked. At speeds above 106mph, the car automatically lowers by 35mm whilst the chances of keeping your licence are simultaneously lowered considerably more.

A choice of four drive modes all benefit from an intelligent all-wheel drive system with a sporting bias towards rear-wheel drive. Incorporating a mechanical self-locking differential and active torque control, the system will drive the rear wheels only when dormant, stirring when called upon to transfer as much as 50 percent of torque to the front wheels.

On board, the best build quality Maserati has managed in an age is hallmarked by a gently idiosyncratic meld of flair and functionality. A new multimedia interface combines an 8.4-inch touchscreen with rotary dial control, and works quickly and well enough, though why something as fundamental to winter starts as front-seat heater switching should be buried in a sub-menu is beyond us…

Though the leather upholstery looks appropriately opulent, it somewhat lets the side down on the comfort stakes; inadequate front seat-back lateral support leaves you prone to sliding to and fro like a puppy cornering on Lino, and the bases are sufficiently hard and lumpy to merit updating an old fairy story to The Princess and the Tennis Ball status.

The best news of all – though pricing has yet to be confirmed for the UK – is a tag of around £55,000, though this would feel more of a steal if the label were dangling from the 424bhp V6 petrol-powered Levante S, which sounds, and goes, considerably more like a car sporting the trident at the business end ought to.

We’re not alone in feeling this, which may account for Maserati chief Harald Wester’s off-the-cuff announcement hint that the petrol V6 would probably be coming to the UK after all. Don’t hold your breath.

The company dubs the Levante the Maserati of SUVs, saying ‘We didn’t build an SUV, we built a Maserati’… That might be true of the Levante S, but, truth is, the 3.0d is rather more akin to merely a well-judged SUV that happens to be badged Maserati. Let’s hope the former does actually make it to the UK market, even if nobody actually buys it.

Read on for the comprehensive Parkers Maserati Levante review.

Actually 2017 Maserati Quattroporte Is the Most Italian Car on Earth