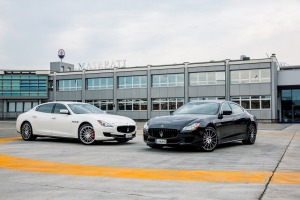 “An improperly tightened rear tie rod to hub-carrier assembly attaching bolt may allow the tie rod to separate from the hub carrier, resulting in a loss of control, increasing the risk of a crash,” NHTSA said in its recall summary.

WASHINGTON — Maserati North America is recalling 26,464 2014-’16 Maserati Quattroporte and Maserati Ghibli sedans because of a suspension problem, according to the National Highway Traffic Safety Administration.

Maserati told federal safety regulators it received 12 field claims about the problem, including some reporting “noise issues experienced by customers during driving.”

A Maserati spokeswoman did not respond immediately to a query from Edmunds asking if there are any injuries, accidents or fatalities linked to the recall.

Maserati dealers will inspect the bolts to verify that they are properly tightened, replacing the rear tie rod to hub-carrier assembly as necessary. The recall is expected to begin on July 1. Owners can contact Maserati customer service at 1-201-510-2369.

Edmunds says: Maserati dealers are waiting for parts, which should be available within 60 days, the company said. If you own one of these cars and have an immediate concern, it’s best to contact your dealer now.