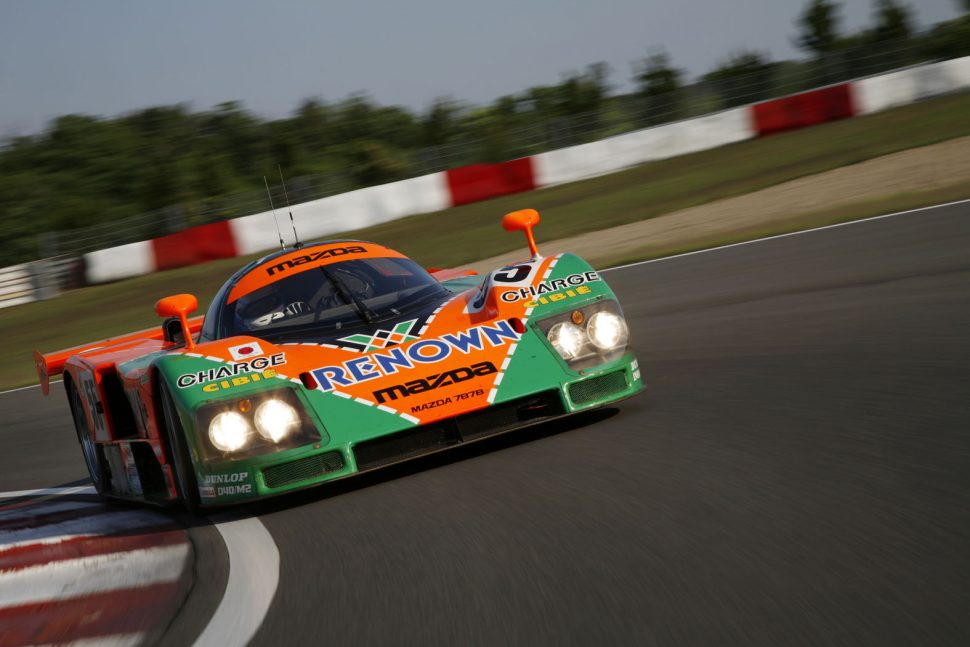 Entered by Mazdaspeed, the normally aspirated, rotary-powered 787B completed 362 laps, besting a trio of Tom Walkinshaw Jaguars that finished in second through fourth places, sporting their famed Silk Cut livery. The second-place TWR team finished two laps behing the 787B, which featured the driving talents of a trio of experienced, but relatively young, Europeans: Volker Weidler, Johnny Herbert and Bertrand Gachot. But the real competition had come from the Sauber-Mercedes C11s, which had held the top three spots a quarter of a way into the race.

It’s hard to believe that a quarter century has passed since Mazda’s remarkable win at the 24 Hours of Le Mans in June of 1991. It remains the only victory by a Japanese team or a rotary-engined car.

But before we get to the drama of the race, there was plenty of drama in sports car racing in 1991 before a single wheel turned in anger. Formula 1 had come through a majorswiss replica watches upheaval in the late Eighties when 1.5-liter turbocharged engines were banned in favor of 3.5-liter normally aspirated powerplants. With relatively few restrictions on engine layout and cylinder count, manufacturer participation jumped with not only the usual suspects of Ford, Ferrari and Honda in the hunt, but also Renault, Yamaha, Peugeot, Lamborghini, Subaru (via Motor Moderni, who designed and made their flat-12) and Judd, the latter primarily a supplier to privateer teams.

The FIA wanted to see these new 3.5-liter engines in sports car racing which had proven quite popular in the Eighties, so the 3.5-liter engine formula was adopted for the Group C category that had defined Le Mans and endurance racing for a decade. However, instead of these programs helping manufacturers better amortize the costs of their Formula 1 programs, Group C racing with the new engines became so expensive that the large group of privateers that fills out the bulk of the Le Mans field each year continued with the older cars, despite a 100 Kg weight penalty. 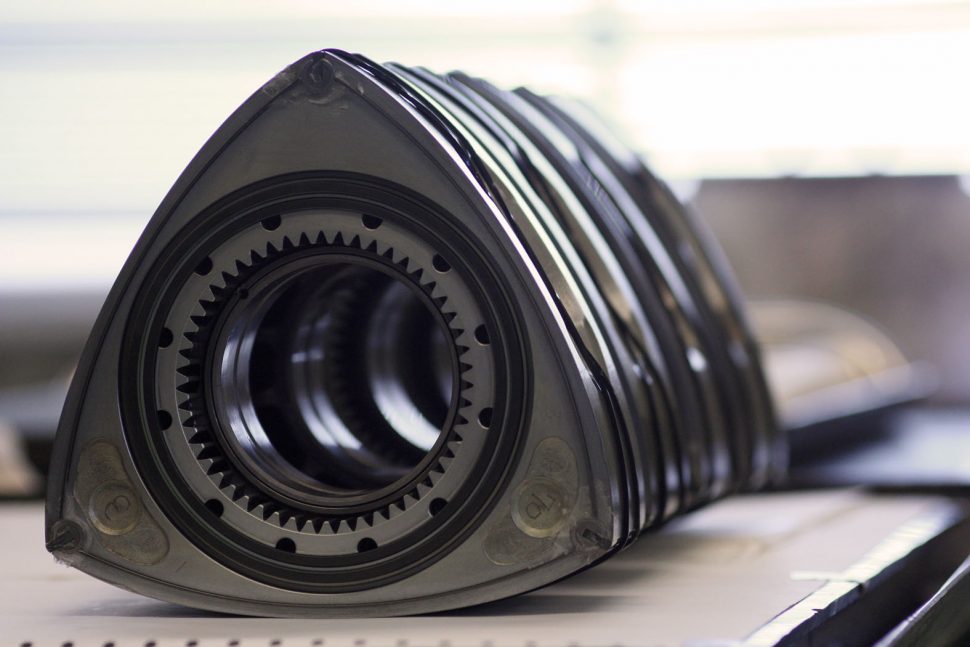 But wait, that wasn’t all the FIA had up their sleeve. For Mazda, champions of the rotary engine, who had been competing at Le Mans since the early Seventies with privateer teams, 1991 would be their last chance to compete at the top level on their terms as the rotary was outlawed from 1992 on.

Still, since the Group C bunch running the older cars proved still faster than the newer cars at Le Mans, the FIA and Le Mans organizers ACO declared that the first 10 spots on the grid would go to the 3.5-liter machines, qualifying results be damned. Of course, with the high-revving Formula 1 engines designed for about two hours of max performance, few believed that they would last past midnight, let alone the full 24 hours.

The strong money seemed to be on the Sauber-Mercedes C11s and the Jaguar XJR-12s run by TWR. Though both Sauber-Mercedes and TWR-Jaguar had prepared cars to the 3.5-liter formula, those machines were significantly down on power and no match for even the weight-addled Group C machines. 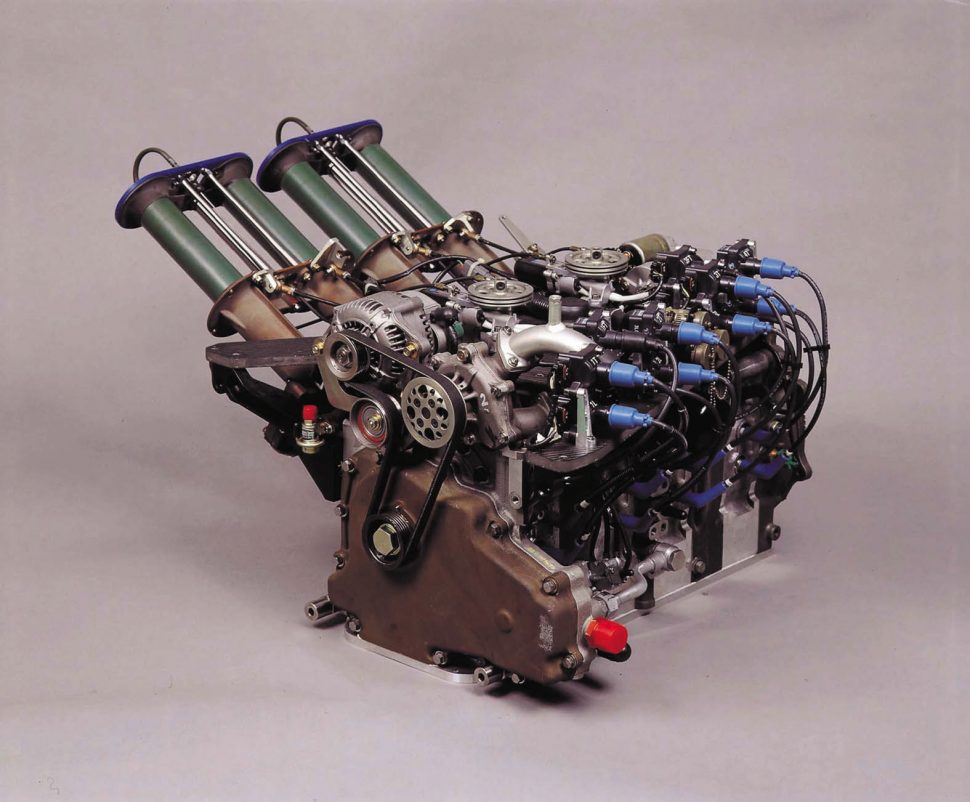 But Mazda, in the form of the semi-independent Mazdapseed team, had prepared well. The 787B was their latest—and, as it turned out, final—rotary-powered prototype to tackle Le Mans. At the heart of the 787B was the incredibly trick—and incredibly loud—R26B engine, a four-rotor affair that produced an estimated 700 peak horsepower at 9,000 RPM without turbocharging. Mazda had found improvements in power, torque and fuel efficiency in the offseason, the latter of which would become critical as the legacy teams would face much tighter limitations of fuel compared to the 3.5-liter teams. Surprisingly, Mazda escaped the 100 Kg weight penalty slapped on the other legacy teams, a figure that not only helped their acceleration and handling, but also fuel economy.

The Sauber and Walkinshaw teams garnered the fastest qualifying laps, roughly four seconds apace of the top 3.5-liter ream Peugeot. The #55 Mazda qualified with the 12th-fastest lap, a full 12 seconds behind the Sauber-Mercedes C11. Mazda did have another ace up their sleeve in the assistance of Oreca, the French endurance-racing team with its own long and storied history at Le Mans. 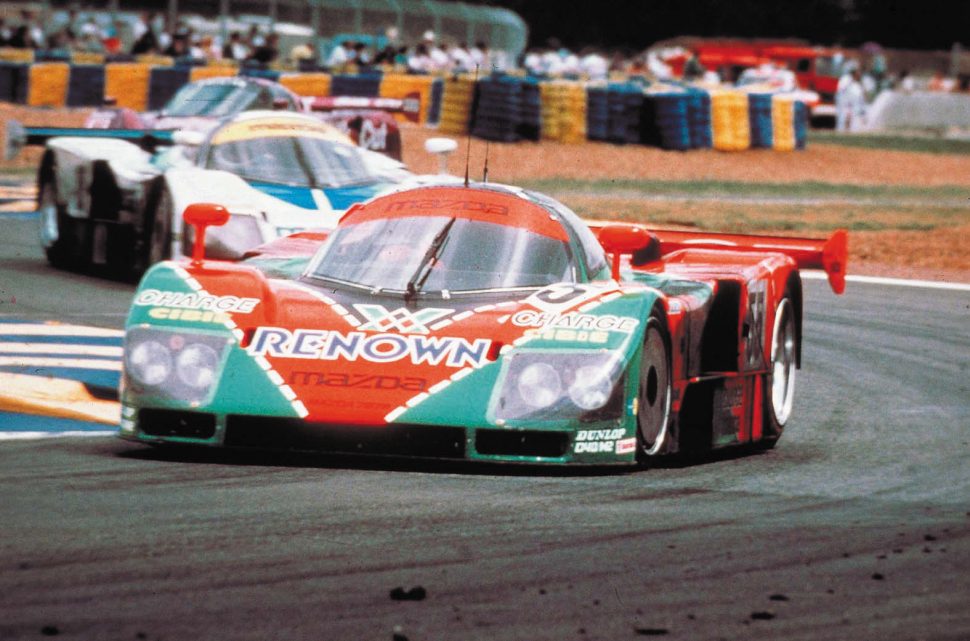 At the start, the Peugeots, which were first on the grid despite not setting the fastest qualifying times, sprinted into the lead. But a fire and an ignition problem had them out within the first few hours. Mazda, being down four seconds a lap to the Sauber-Mercedes trio, had to hit it hard all race long, just to keep pace. And in the sixth hour, the orange-and-green, Renown-sponsored car wearing the #55, had managed to secure fourth place behind the formidable trio of Saubers. The Jaguar team had never quite come to terms with the weight penalty, rendering their cars harder to drive, despite their overall pace several seconds ahead of the Mazdas.

Mazda would have to do everything right and hope for a break to even sniff the checkered flag. Fortunately, the bad luck that can affect any team in an endurance race can also favor another team. One of the Sauber teams lost some 40 minutes in the pits after the car’s undertray struck some debris on the track, bringing Mazda to third by halfway at 4:00 a.m. on Sunday morning. 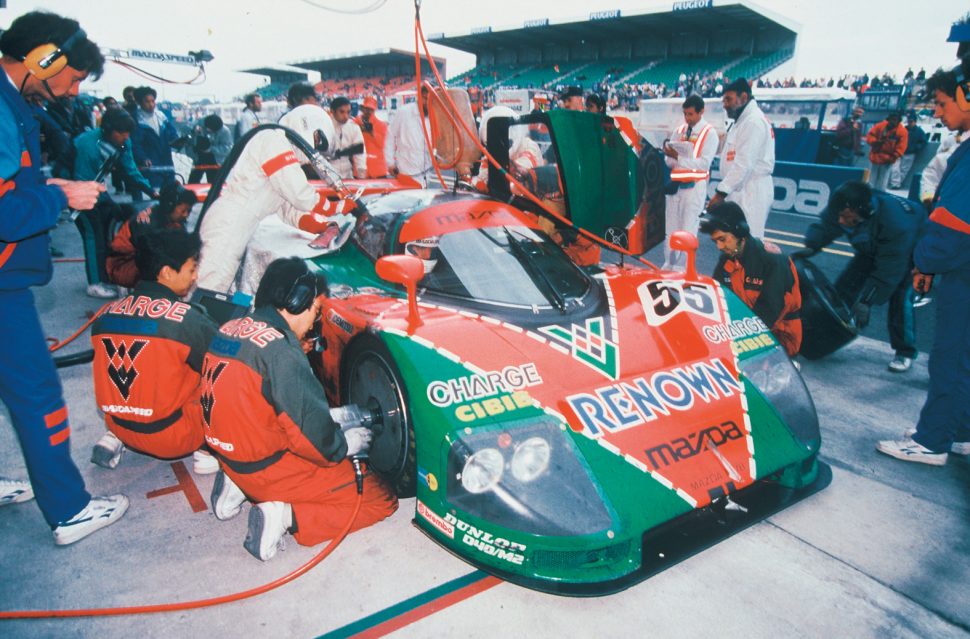 A transmission problem stalled the then number-two Mercedes team for an additional 45 minutes, dropping them back into the pack and opening the door for Mazda to grab second place. With just about four hours left, around noon, the leading Sauber-Mercedes, two laps up on the Mazda, suffered the failure of the alternator mount which did in the water pump and sent the steaming C11 into the pits. More than a half hour passed, during which the #55 took the lead. The Sauber went out for one lap and retired immediately to the pits.

Johnny Herbert found himself in the lead. Not wanting to chance any problems in the pits with a driver change—a distinct possibility at Le Mans, Herbert stayed in the car, roasting in the hot French summer. When Herbert finished the race, the crowds stormed the track. While his teammates enjoyed the top spot on the rostrum, Herbert had to be treated for dehydration and exhaustion by the trackside medical teams. 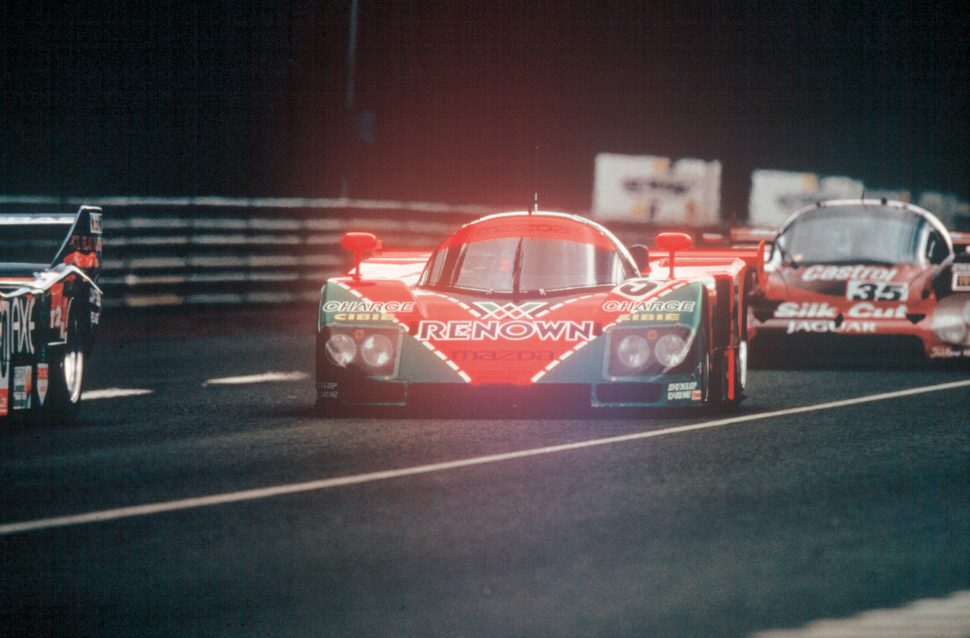 Mazda had won a very hard-fought race that required them to be absolutely on top of their game against faster competitors. A second Mazda 787B, car number 18 running in Oreca colors, finished in sixth place, seven laps down.

Just as Mazda’s 1991 victory marked a milestone for the Japanese company, it was the same for the trio of young drivers. Johnny Herbert, a popular up-and-coming British driver suffered severe leg injuries during a Formula 3000 crash in 1988, with doctors contemplating amputation of part of his lower extremities. Though Herbert eventually won three Formula 1 races, two of which contributed to his fourth-place finish in the 1995 drivers championship, the Le Mans win remained the biggest of his career. 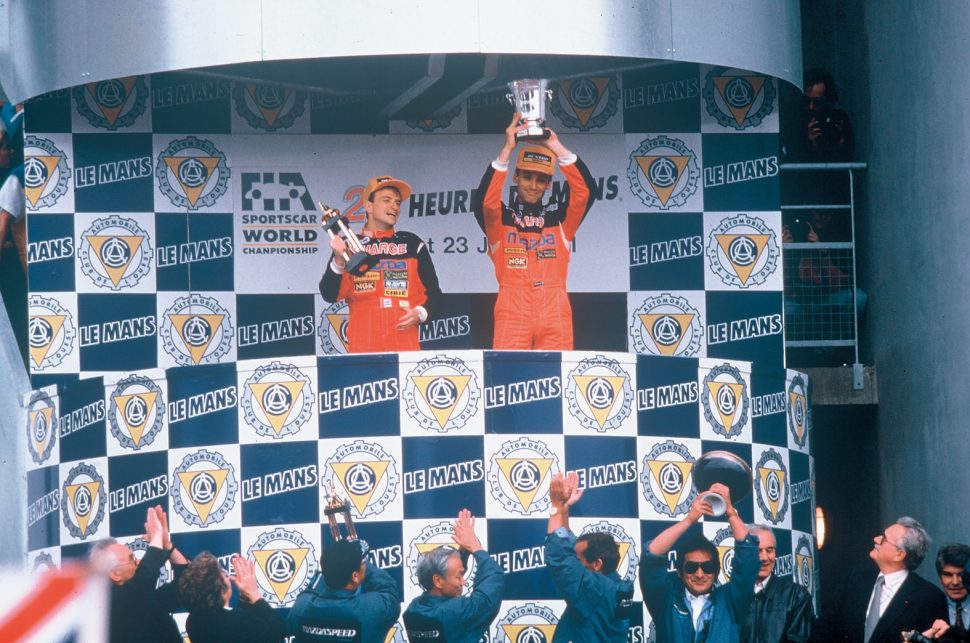 Bertrand Gachot, who had a few years of fringe rides in F1 under his belt, was just coming into his own with the fledgling Jordan F1 team, then in its first year. With surprise points-scoring finishes, both the driver and the team looked to be on their way up. While Jordan did scale the ladder on their way to several hard-fought wins later in the decade, Gachot’s star fell much faster, the Belgian-French driver spending two months in prison later that summer for having responded to a dispute with a London taxi driver by spraying him with tear gas. Yes, tear gas! He only managed a single point in several later F1 seasons with poorly funded, poorly performing teams, often not even managing to qualify or finish.

Volker Weidler’s career took an even shorter turn, likely due to his association with the Mazdaspeed team. Like Gachot, Weidler had managed a few F1 runs with some of the lower-level teams that struggled to compete. He took his talents to Japan, where he was leading the national Formula 3000 championship in 1992, only to retire during the season due to hearing loss related to inner-ear problems. Most accounts attribute Weidler’s hearing loss and subsequent problems to the incredibly loud Mazda rotary engine. 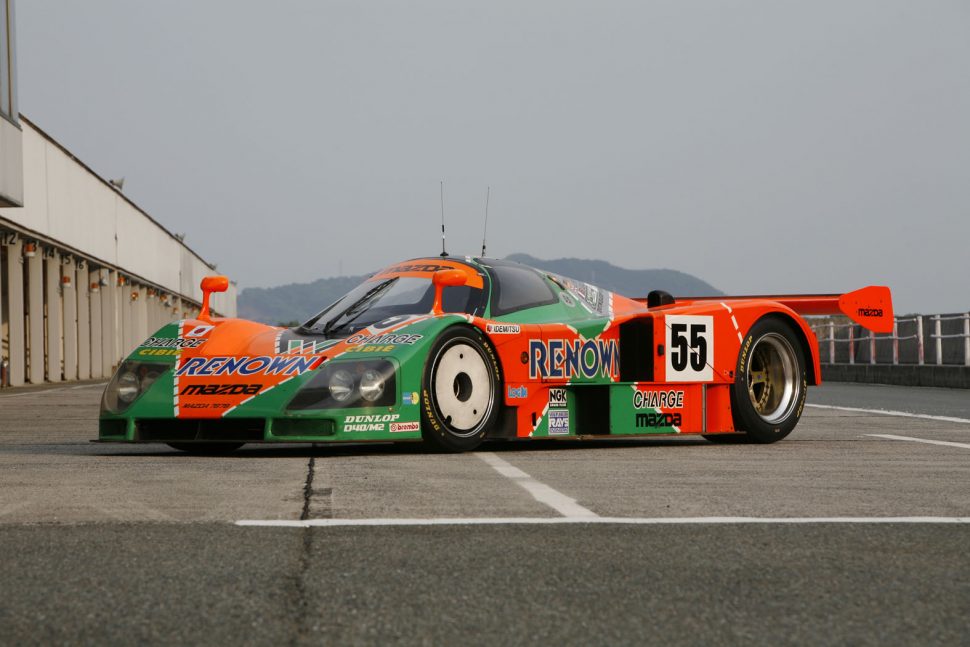 Rulemakers outlawed the noisy and thirsty R26B after the 1991 season. Mazda did return in 1992, with the MXR-01, a replacement for the 787B, which featured a Judd V10 engine and the same trio of drivers, along with Brazilian Maurizio Sandro Sala. The team finished fourth behind a pair of Peugeot 905s in first and third sandwiching the second-place Toyota TS010. Mazdaspeed, originally founded by the largest Mazda dealer in Japan, became a wholly owned subsidiary of Mazda in 1999 and has since produced several hot-rodded versions of their street cars. Racing continues, but not at the top level of Le Mans.