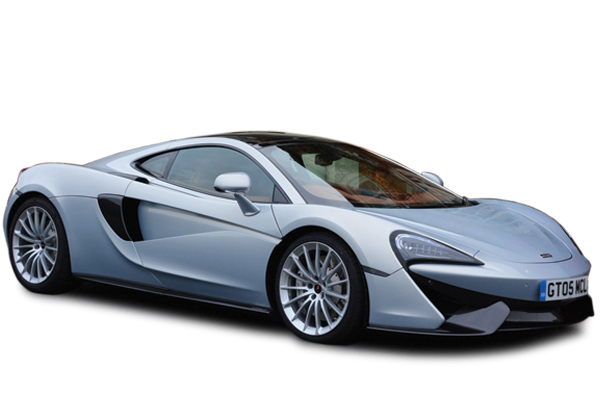 Second of what will become a three bodystyle Sports Series family is the McLaren 570GT, a slightly softer, more comfortable take on a high-performance two-seater from the Woking-based manufacturer.

Like the rortier McLaren 570S and entry-level 540C, the 570GT is a coupe, but unlike the other two with their aerodynamic rear buttresses, this one has a side-hinged glass tailgate instead of a vented engine cover, liberating a further 220 litres of storage space in the process.

That third body style? Expect an open-topped Spider to come on stream in due course.

Despite being less hardcore than the 570S Coupe, the McLaren 570GT isn’t short on the sort of performance required to face the Ferrari 488, Mercedes-AMG GT Coupe and Porsche 911 Coupe head-on.

The reasoning behind the McLaren 570GT’s existence is multi-faceted, but primarily centred around demand for a more user-friendly version of the harder core 570S.

Side on, the two coupe bodies look remarkably similar, but the arc over the door openings differs, as do the wrapped-over rear wings: on the GT they flow seamlessly into a fully glazed, side-hinged tailgate, itself a visual extension of the glass roof over the cockpit.

That tailgate, reminiscent of that fitted to Jaguar’s iconic E-Type, canopies over a leather-lined boot space McLaren’s dubbed the Touring Deck. There’s 220 litres of relatively shallow space there in addition to the 150 litres of cargo volume in the nose – the total boot space of the other Sports Series models.

Further transformative elements to distinguish the GT from the S are subtler: although the side scalloping remains, there’s less contrasting carbonfibre on display, making the GT more colour sensitive in some of the eye-popping hues McLaren offers.

Modifications have been made to the steering (two percent less direct) and suspension (softer to the tune of 10-15 percent) in an effort to make the GT comfier and less darty. It’s also got a quieter exhaust, although everything’s relative as a twin-turbo V8 powerplant still plays its throaty melody through it.

No shortage of performance

While the motors in McLaren’s Formula 1 cars are supplied by Honda, the powerplants in its road cars – they share the name but the company is run as a distinct entity – are home-grown.

Powering the 570GT is a 3.8-litre unit mustering an impressive 570hp and 600Nm of torque, sending power exclusively to the rear wheels via a seven-speed twin-clutch automatic gearbox.

Forget any preconceptions you may have about its performance being somewhat dulled in this GT model: McLaren claims a top speed of 204mph with a 0-62mph time of just 3.4 seconds. That’s quick by any yardstick.

Thankfully, because of its carbonfibre passenger tub and extensive use of lightweight aluminium throughout much of the rest of its construction, the McLaren’s shorn of heft, tipping the scales at just 1,350kg, which helps promote fuel efficiency – the official claim is 26.6mpg with CO2 emissions of 249g/km.

Only one version available

As part of the Sports Series, there’s only a single version of the McLaren 570GT available so it’s just as well it’s luxuriously equipped, with a fully leather-lined two-seater cockpit, extra sound- deadening materials and soft-close doors to reinforce its more refined persona.

At this end of the market you can have your colour and trim whims entirely catered for courtesy of the McLaren Special Operations (MSO) Bespoke service – but this is purely superficial in the sense that the mechanical components remain untouched.

Read the full McLaren 570GT review to find out how good this slinky Grand Tourer really is.