You are here: Home  /  Car Reviews  /  Mercedes-Benz Team Up with a Drone Startup to Create a Concept Car for Small Package Drone Deliveries
Car Reviews 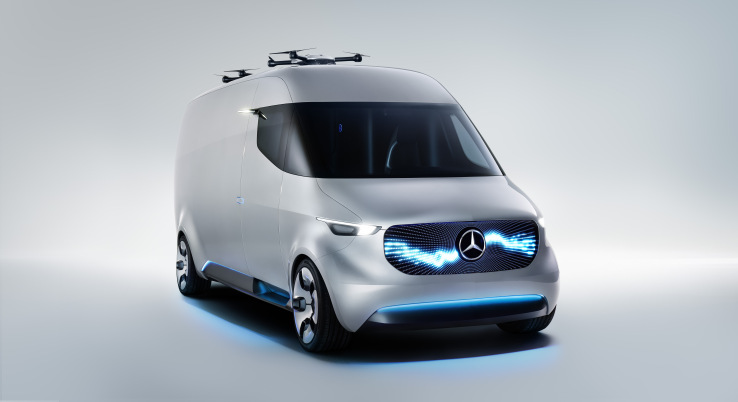 Mercedes-Benz has teamed up with a drone startup to create a concept car for small package drone deliveries.

While many questions still remain regarding the practicality and legality of drone delivery, the Vision Van by Mercedes and its drone parter Matternet offers a clear vision of how such a system could work. Rather than having drones run back and forth between stationary warehouses, as Amazon’s drone delivery plans suggest, the van would drive around like any other with a delivery man making rounds.

The difference would come with its drones, which would be flying to areas out of reach for the driver. Drones could track the van and simply fly back to wherever its new location would be. Matternet’s autonomous M2 drones could carry a package 4.4 pounds over 12 miles. This dual-wielding efficiency would allow for packages to get sent out from the electric van, with a battery that could take it 168 miles, all day.

In a press release, Mercedes-Benz has imagined what a typical day would look like for Pete Smith, a hypothetical ride-along employee of the Vision Van.

[The van] scans the packages, sorts them and carries out order picking, assigning them to special racks. A driverless handling vehicle then loads the racks into the intelligent van. Peter Smith can start his tour in a relaxed state of mind. At the start of his shift, he simply enters his Vision Van via the automatic sliding door on the right-hand side and steers the vehicle by joystick from the grounds of the distribution centre. The electric drive system ensures that the Vision Van runs virtually silently along the road and free of local emissions. Integrated delivery drones are positioned on launching and landing platforms on the roof.

Mercedes-Benz has put out a video suggesting what Pete Smith would look like close-up, complete with an LED drone warning for drivers behind the van and fawning women ecstatic over their deliveries.

While known in America for luxury cars, Mercedes-Benz has a rather impressive van portfolio. Selling 321,000 such vehicles in 2015, the company has a wide range of brands fitting different van niches. This makes it unlikely that the Vision Van would first come to America, the car company would probably want to start where it already has a van infrastructure in place. But with the Vision Van, Mercedes-Benz and Matternet have set a benchmark for small package delivery.