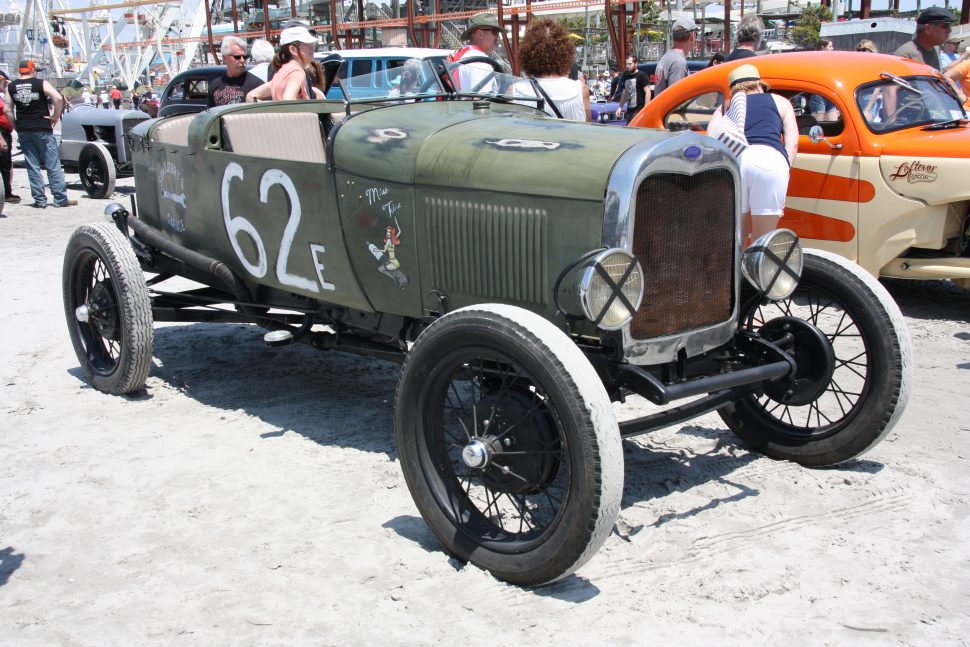 We spotted Miss Fire here as she wheeled into the impromptu Friday night car show in Wildwood, New Jersey that precedes The Race of Gentlemen each year. Owner/builder Matt Kutz, owner of Sam and Jerry’s Garage in Carlisle, Pennsylvania was at the wheel.

Matt Kutz’s Kammback phaeton speedster cuts a dashing figure in spectator parking at The Race of Gentlemen. Photos by the author.

In a gathering composed mainly of stripped-down, stock-bodied cars with hot engines, the stock-engined Ford Model A with a hand-crafted speedster body really stood out. Matt’s build philosophy is one focused on saving weight instead of building power.

“I would estimate from the cowl back weight is a hundred pounds, maybe,” Matt says, “I can actually lift each tire off the ground. The front barely, but I can!” 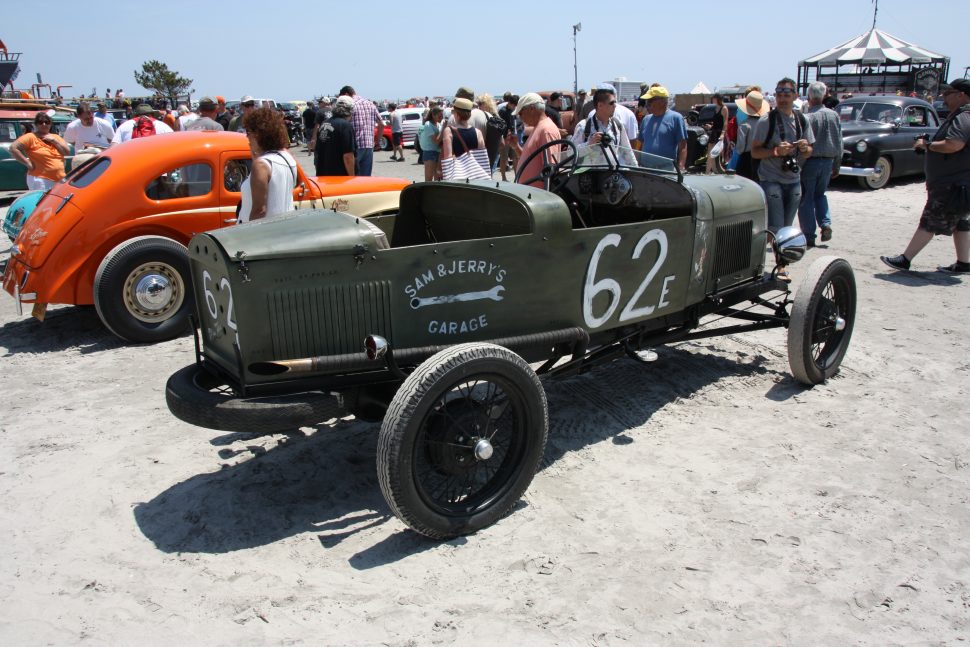 Despite appearances, the only factory pieces used in the construction of the Kamm tail were a pair of hood sides. The tonneau cover (not shown) is held in place by WWII-surplus Willys Jeep top fasteners.

The genesis of Matt’s gow job was a 1929 Ford Model A Tudor he purchased 13 years ago for a period A/V-8 build. The poorly done ‘70s restoration hadn’t aged well, so he had no qualms about taking it apart, but like many of the period-plausible bent, Matt didn’t want to see any good vintage parts go to waste. When he heard about TROG, he was inspired to build a beachster.

As a family man, Matt wanted to build something that would accommodate his three-year-old daughter. Taking inspiration from Europe, he elected to build a dual-cowl phaeton. The Kammback design was inspired by vintage speed boats as much as it was aerodynamics and was dictated by aesthetics as well as speed.

“Probably overall length was the biggest dictator in that decision.  With the rear seat, it would have to be a foot and a half longer to bring it to a conventional point.”

“The proportions would be a little out of whack with that much overhang,” he notes wryly. 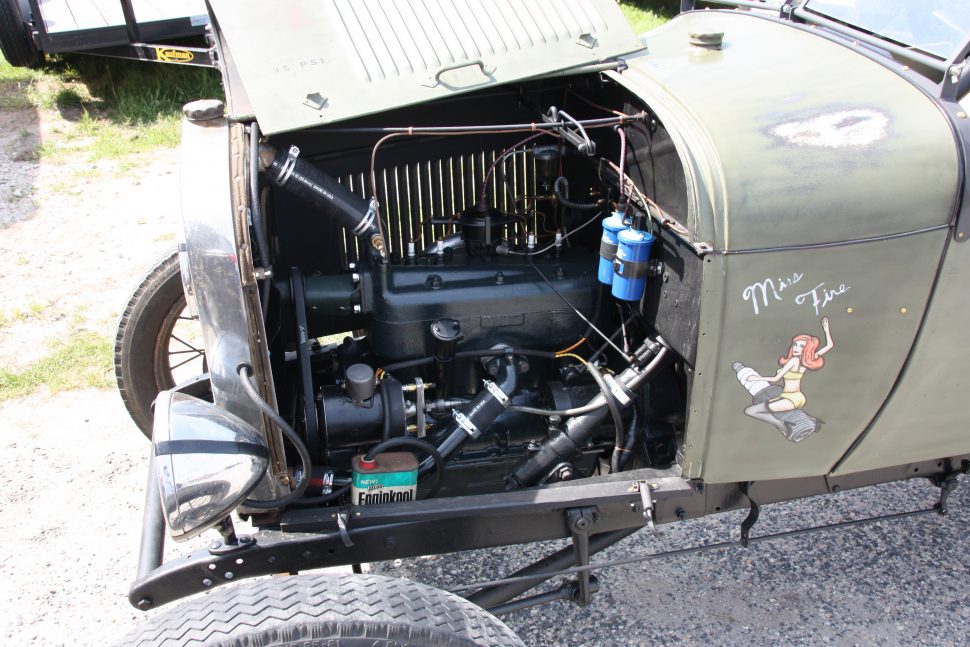 Aside from the dual coils, the Model A four-cylinder in Miss Fire is a stocker carefully reassembled with close attention to efficiency.

The stock four may not be as visually impressive as some of the hardware found on the beach, but it more than makes up for it simply by virtue of its reliability, which allows Matt to jump in the A and go for a drive at a moment’s notice.  And it’s no slouch.

“Top speed is probably about the same as [a stocker], but I kept up with a two-liter Ford Focus in town that was messing with me at our car show here, so I don’t think that’s too shabby.”

To make sure that all 40 of his factory horses answer the call when he wants them, Matt went back to basics and massaged every bit of the engine for maximum efficiency.

“I polished the combustion chambers and the top of pistons, port matched and cleaned up the intake and exhaust ports, did a little pocketing around the valves, beveled the edges of the aluminum cam gear, undercut the oil pump driveshaft for more flow, chamfered all edges in the engine, radiused all internal oil drain backs, planed the head just a bit, turned a little bit off the flywheel and just re-gasketed everything, including a copper head gasket.” 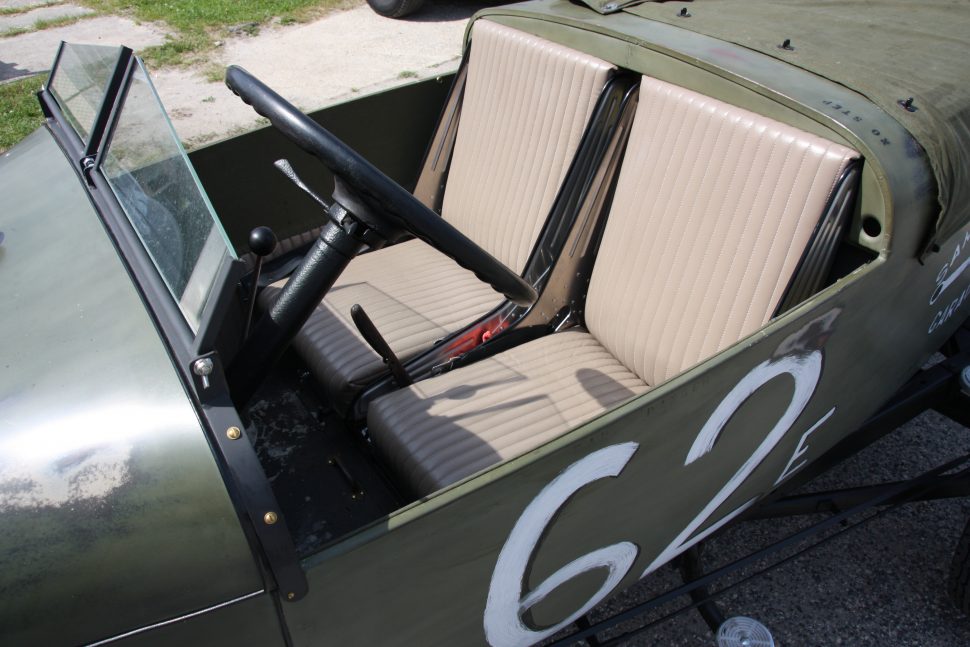 Aircraft-style seats were constructed by the owner using aftermarket sides. Seatbelts front and rear are surplus from a Douglas DC-7. Note the owner-built Brooklands-style windscreens.

And in a throwback to when fellas invested their time in their cars more than their sparse dollars, Matt notes that “I probably have 250 bucks in the entire engine, and the most expensive item was the gasket set.”

That idea of found horsepower continues with the next trick Matt has in store for his phaeton. “I’m going to try to figure how to loosen and tighten the belt from the driver’s seat during a run: No fan, no genny. After the run, re-engage the belt. In high school,  I built a ‘72 nova, that had a switch on the alternator, turning it off was probably three or four extra horsepower, not a lot, but noticeable. On these, 40 horsepower, plus two is a noticeable percentage increase I would think.”