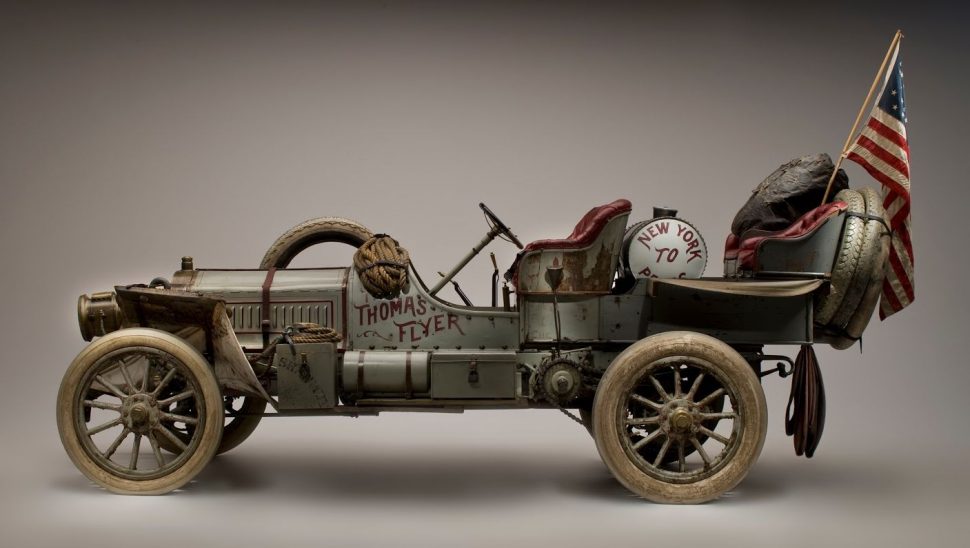 Schuster, the mechanic for that landmark race and the only man from the Thomas team to live into the 1960s, disappointed many who sought his stamp of approval on the car during the Forties and Fifties. Garry Moore, host of the television show I’ve Got a Secret, unsuccessfully tried to get Schuster into the car during the latter’s appearance on the show. Neither Charles Finnegan or Henry Austin Clark, Jr., could convince Schuster to positively identify the car when they owned it. Nor could collector extraordinaire Bill Harrah, at least not at first.

Until he saw it stripped to the chassis with his own eyes, George Schuster simply wouldn’t take anybody’s word that this old touring car was the one and the same that ferried him and a few other fellow travelers almost around the world in 1908 to win the legendary New York-to-Paris race. But confirm its identity he (eventually) did, and more than 50 years later, his authentication remains key in documenting the 1907 Thomas Flyer for the National Historic Vehicle Register.

According to his account in The Longest Auto Race, Schuster identified a number of details that differed from his memory of the big 60-horsepower four-cylinder 1907 Thomas Flyer: “The front wheels had only ten spokes, not twelve, as during the race,” he wrote. “Instead of two separate rear seats, there was one wide seat. Dirt and rust covered everything, but because I couldn’t find the angle iron and boiler plate with which we had made repairs, I concluded that the frame and motor were different.”

And Schuster should have known his Thomas Flyers. Aside from the 169 days he spent alongside driver Montague Roberts in, on, around, and under one repairing it, maintaining it, and generally keeping it intact across the United States and Canada, Russia, and Europe, Schuster had worked for Thomas as a chief road tester and demonstrator – a job that required intimate familiarity with Thomas automobiles.

“I was glad to see that the car was a 1907 and not one of the new 1908 models,” he wrote of his introduction to the now-famous Flyer. “The latter were not so good on hills as cars of the previous year, and the newest models still had bugs in them… The $4,000 Thomas Flyer of 1907 was a proven machine, one of the greatest cars of its day. Each had to climb Buffalo’s Brewery Hill in high gear and do 55 to 60 miles an hour in a road test, before being delivered to a customer.”

His hesitation to authenticate the car for Harrah – who bought it from Clark in 1964 – amounted to more than just skepticism over seats and wheels, according to Jackie Frady, executive director of the National Automobile Museum.

“He was doubtful because of the amount of time that had gone by,” she said. “He just couldn’t believe that the car was retained and existed all that time. Cars weren’t quite the historical thing to preserve then that they are today.”

Harrah, however, believed. He believed in the car’s provenance: that Finnegan, a newspaper publisher, had bought it from Thomas itself during a bankruptcy auction in 1913; that Mrs. Frances du Pont bought the neglected hulk of an automobile from Finnegan as a present for her husband in 1945; and that Clark bought it from the du Ponts for his Long Island museum three years later. He also believed that he could convince Schuster of the car’s authenticity, so he flew the then-91-year-old man out to Reno to look it over.

On first glance, Schuster shook his head. But as Harrah’s men started to strip the car of its body, Schuster began to change his mind. There were the initials M.B. carved into the body, but long painted over, that Schuster recalled from the car’s time back in the Thomas plant after the race (supposedly scrawled by a factory worker for a girl named Minnie Byers). There were the holes Schuster had drilled in the frame to repair it after it broke in half. There were more holes drilled into the flywheel during another repair in Moscow.

Schuster couldn’t help but agree and give Harrah his blessing to proceed with a restoration, one that would reflect the car’s condition in Paris at the end of the race rather than its condition in New York at the beginning. By that summer, Harrah’s shops completed the restoration, and Harrah himself invited Schuster to drive the car around Reno. 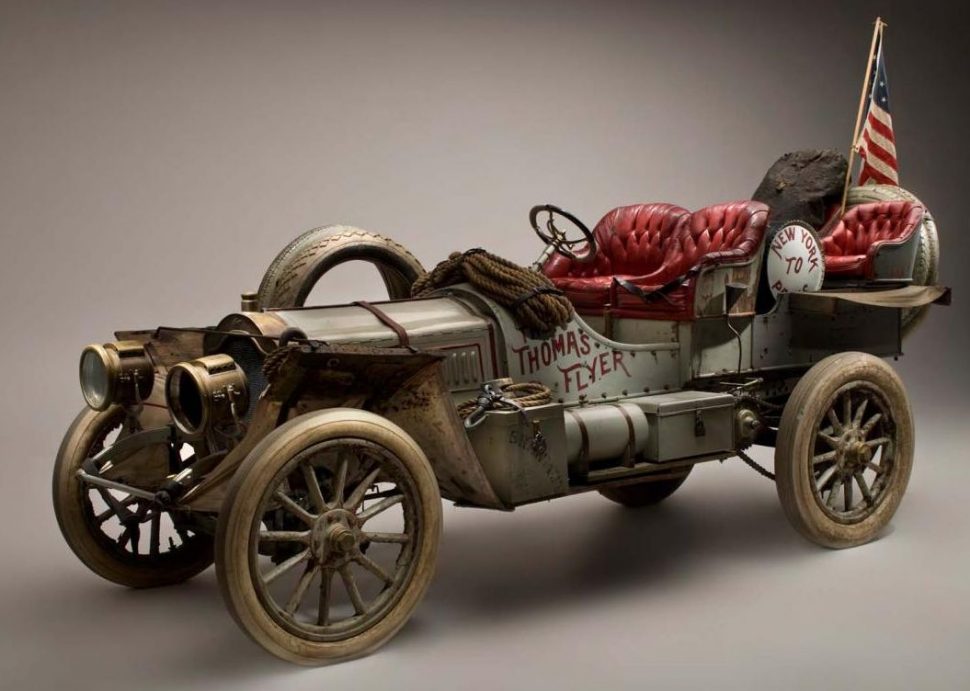 These days, with the car a part of the National Automobile Museum (donated to the museum from the Harrah collection in 1982), it remains in its Harrah-restored condition and still gets some exercise on important occasions, Frady said. One of those important occasions will take place at 6:30 p.m. this Sunday in the museum’s parking lot when the New York-to-Paris 1907 Thomas Flyer will officially go on the National Historic Vehicle Register.

Frady said the Flyer deserves a spot on the register because it represents so much more than just a car that won a race. “You have to look at the impact of the race,” she said. “At that time, European makes were considered superior, but when the Thomas Flyer won, that increased the prestige of American automobiles. The win also proved that something that had never been done before was possible, that automobiles could be used year-round and for reliable long-distance travel. That’s really the car’s historical pedigree, one that’s so often missed.”

The induction ceremony, intended to coincide with the arrival of Hemmings Motor News Great Race participants in Reno, will put the storied racer side-by-side with its spiritual descendants on their way from San Rafael, California, to Moline, Illinois.