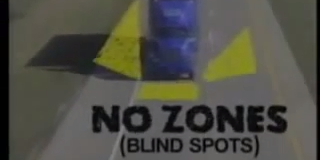 Revisiting Terrible Driver’s Ed Rap of the 90s – No Zones

“Stay Out of the No Zone” is an American classic of driver-centric educational entertainment, on par with “Signal 30” for an earlier generation—but instead of the butchery inflicted on square-haired All-American jocks drunkenly driving their parents’ Buick Wildcats, it’s inflicted on rap music.

Only 90s Kids Will Remember™ the moment during our after-school Driver’s Ed classes when the instructor rolls up that built-in TV/VCR combo on that huge, wheeled, metal rack, and scolds us in no uncertain terms to pipe down and that what we are about to see is vitally important, and that’s when we know we’re in for a hell of a treat: Patek Philippe Replica
we’re about to get our minds blown by a calvcade of fun, inspiring, edutaining audio-visual medium—underscored in a language only the kids these days will understand: through the power of rap music.

The “No Zone” and its accompanying video has been part of the NHTSA’s curriculum for avoiding tractor-trailer blind spots since the mid-1980s, and why think of a more specific phrase? Left side, right side, front and back—the No Zone encompasses all with its non-specificity. It is definitely not a place you want to hang out with your wooden, multicultural friends. It is definitely not where you want to be in your Chrysler LeBaron.

Everybody saw this. Everybody still sees this. Your humble chronicler watched/was subjected to this as recently as the 2005 Driver’s Ed season, which means that Only Aughties Kids Will Remember. Our watched this, probably twice. We also watched a documentary on how Princess Diana died: watched her CGI body bounce limply across the backseat, underscoring the importance of wearing seatbelts. (“Her lungs were punctured!” said our driving instructor, who looked and sounded like Rodney Dangerfield, with Shakespearean gravitas. “She literally drowned in a pool of her own blood!”) Later, some jocks from a nearby town bestowed me with the name “Yao Ming,” given that it was the only Chinese person they could think of, despite the fact that I was and remain 5-foot five. Then, I drove a wheezing Dodge Neon with no front bumper across a wet parking lot.

Come, bask in the nostalgia. Even during the Golden Age of Hip Hop, when Tipper Gore foamed at the mouth and rappers rapped about going to the hat store, the genre was already being coopted to speak to “the youths.”