As they got closer to investigate, they realized that, in fact, they had stumbled upon some of the earliest sanctioned drag racing east of the Mississippi, taking place on one of Ohio’s first dragstrips, a site that the state’s historical society will honor with a marker this weekend. The Arfons brothers thought a plane had crashed. It was the only reason they could think of for such a crowd to gather at the Akron airport and close off the access road.

Like many places across the country, when drag racing came to northeastern Ohio, it came in the form of illegal street racing, but in Akron that changed in 1951 when, according to Randy Lipscomb, an area drag-racing enthusiast, a bunch of kids looking for a legal place to race arranged a couple places to do so. The first, a two-lane road in front of the grounds of the All-American Soap Box Derby, gave them a place to go every Sunday during the summer.

But soon after the nearby Akron airport allowed racing once a month on its runway, a more ideal location for the National Hot Rod Association to sanction drag races. It was there that Art and Walt Arfons got their first glimpse of the sport and it was there that they decided to give it a go themselves.

“I wasn’t aware of drag racing until that day,” Art Arfons told Samuel Hawley for his book, Speed Duel. “It was fascinating, the smoking tires, the screaming engines, a lot of horsepower running wide open.”

After a disappointing initial attempt with a Buick V-8, the brothers switched to aircraft engines and didn’t look back, eventually taking their fascination with speed to Bonneville where they both set land-speed records during the Sixties.

But the strip, which remained open until 1959, when nearby purpose-built cryo-watchtracks such as Norwalk and Quaker City put it out of business, provided a launching pad for more significant drag racing careers than the Arfons brothers’. “Akron” Arlen Vanke leveraged his experience racing there into national drag racing success, as did Otis “Otie” Smith, the man who provided the impetus for the historical marker.

“Otie passed away three-and-a-half years ago, and we decided we needed to do something for him — his family didn’t even mention anything about his racing in his obituary” — Lipscomb said. His discussions with an Akron city council member led him to the Ohio Historical Society, which provided Lipscomb with an application form for a historical marker. “The guy in Columbus said they’d never honored motor sports in any form and that our application was interesting enough to approve.” 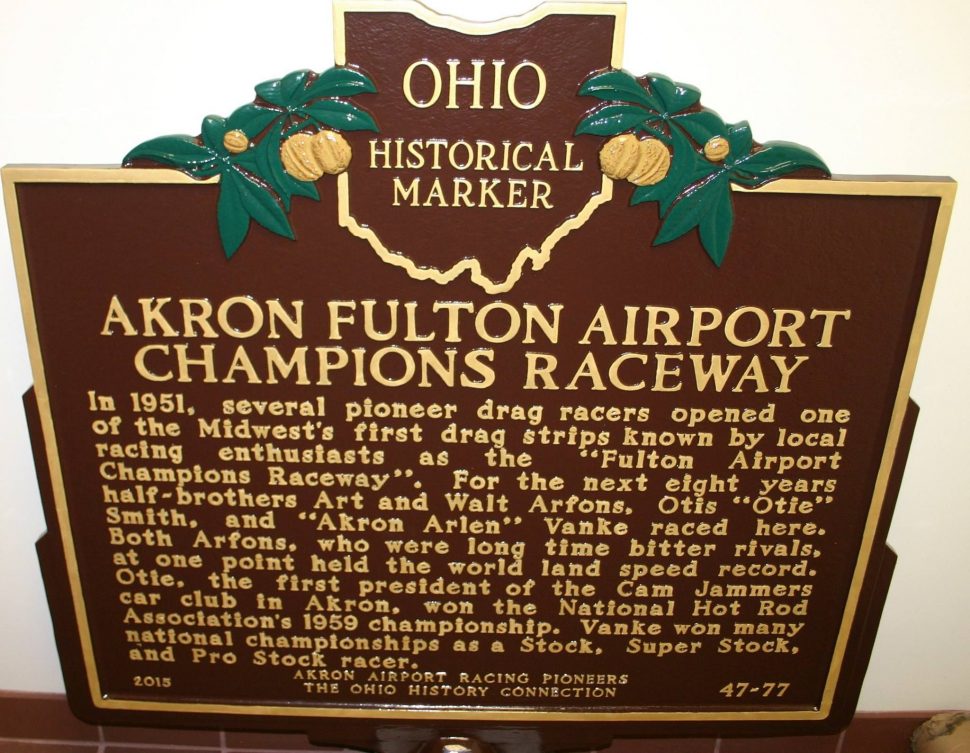 Two years of fundraising and paperwork has thus led to this weekend’s ceremony, which will place the bronze historical marker at the airport and which will also feature a car show and special appearances by Vanke, members of the Arfons family, early members of the Akron-based Cam Jammers car club, and a number of cars that raced at the strip.