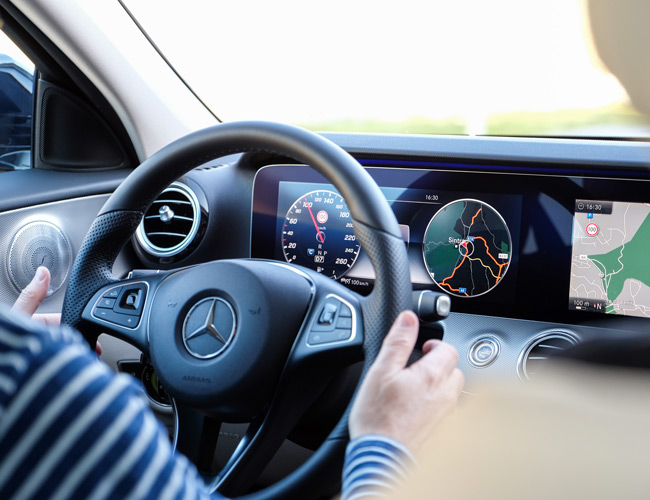 Determined to make it, I jumped back into the 2017 Mercedes-Benz E-Class I was driving, dialed to its sportiest setting, and dive-bombed through curving back roads, carving a high-stakes path toward the motorway. When I merged into traffic there I set the cruise control at 90 mph, flicked a small steering column stalk to activate the car’s very intelligent computers, and took my hands off the wheel.

My flight was taking off in an hour and 15 minutes. Yet there I was, an hour away from the Lisbon airport, stopping for espresso and to take pictures of the gorgeous mountain view.

I made that flight — barely. (Note: never, ever be late to the Lisbon airport, especially if you’re in poor shape — after security there’s a meandering shopping center you have no choice but to pass through, like hell’s IKEA for the tardy.) There was never a question that I would make it, since I could have easily driven myself all those miles at high speeds and accomplished the same task.

But with so little input, the E-Class, using its highly engineered and quite refined semi-autonomous Intelligent Drive tech, kept its distance from other cars automatically. It changed lanes for me after one tap of the turn signal. I knew from a demonstration the previous day that the car would emergency brake and tighten the seat belts if a collision was probable (they sound like suppressed pistols in a spy thriller). I knew the car would pull away from other veering vehicles and make evasive maneuvers should an obstacle present itself. I knew it would read lane lines and road signs to keep everything in check. It would chauffeur me from the driver’s seat.

But enough exposition. In light of recent events, autonomous driving of any kind has been brought into question; indeed, anyone who loves driving has been wary from the onset of the tech, myself included. I’m a bona fide car nut whose life has been changed several times over by manual transmissions and cars of every ilk. A nut who, instead of counting “one, two, three” to calm his nerves, imagines driving. Who falls asleep dreaming of a curated garage. Who loves autonomous driving tech. And you will too — here’s why. 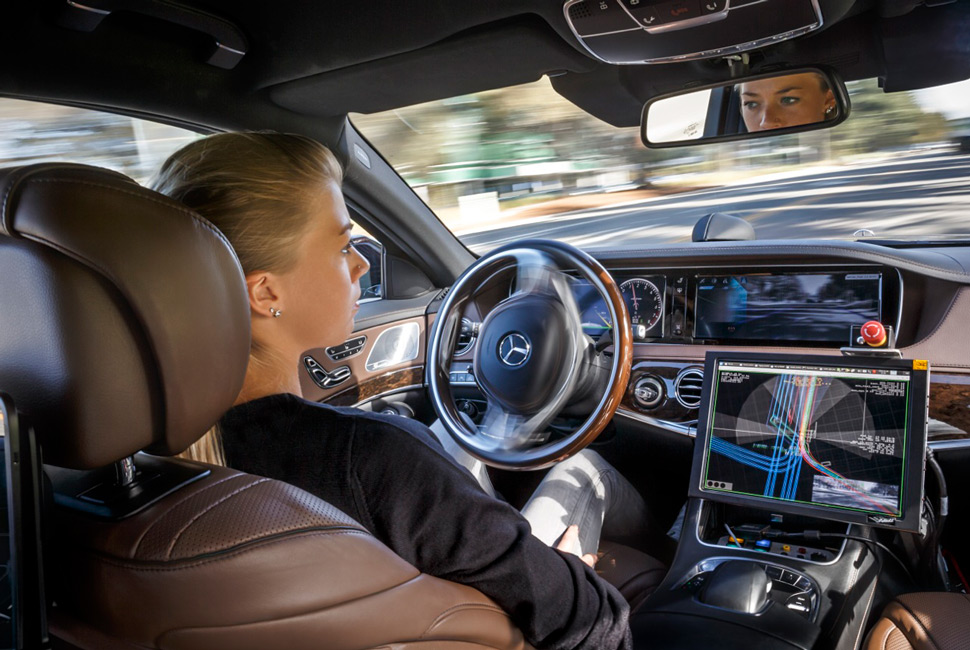 Though the current E and S-Class only offer assisted, semi-autonomous driving, it’s no secret that Mercedes-Benz is perfecting their fully autonomous tech. (Photo: Mercedes-Benz)

We’re not all that close to walking into a dealership (autonomous pod store?) and picking out a vehicle that will take us to a preset destination, leaving us in control of only the music and the A/C. That’s because the government is worried about humans mucking things up when they’re sharing the road with non-human drivers. (For good reason.) Instead we’re still in the limbo stage; hence, Mercedes and Lincoln and Tesla and everyone else getting into the semi-to-mostly-autonomous game. Until major technological and legislative hurdles (perfect computer AI and liability laws) are crossed, we’ll all still be driving. Only some functions will be in the hands of computers for short stretches of road, and you’ll be able to take over at any time, like a parent almost letting go of their just-off-training-wheels five-year-old. (Indeed, all the current systems require drivers to be alert with your hands in contact with the wheel.)

It does the boring parts.

I know: “driving is never boring.” You like the open road, you like half letting your mind drift, but focusing strict attention to your car and other drivers. So I’ll rephrase: autonomous tech allows drivers to be less engaged with the car and more engaged with their surroundings. When I let the E-Class drive me for the first time, it took maybe ten seconds before skeptical old me broke 15-year-old habits and began looking around at sights and cars and people I wouldn’t have ever seen without the car’s help. If that seems obvious, take a moment to think about your commute — how much can you picture? Now, imagine if you could check out someone one car over, or watch the sunset.

This one is hard to admit, but the computer does it better. Mercedes’ Drive Assist uses radar and cameras to scan far in all directions, and knows how much the car weighs, what the road conditions are, where there are cars and trucks and pedestrians and so on. It uses all that data to know when exactly it will need to apply the brakes, when it will need to turn — and when it won’t. Scenario: a car pulls out in front of you without looking, 30 feet ahead. You immediately slam on the brakes, swerve and swear. In the same scenario, if the computer calculates the offending car will be out of the way in time, it won’t swerve or slow at all. The difference is when you swerved, you sideswiped a minivan on its way to middle school. 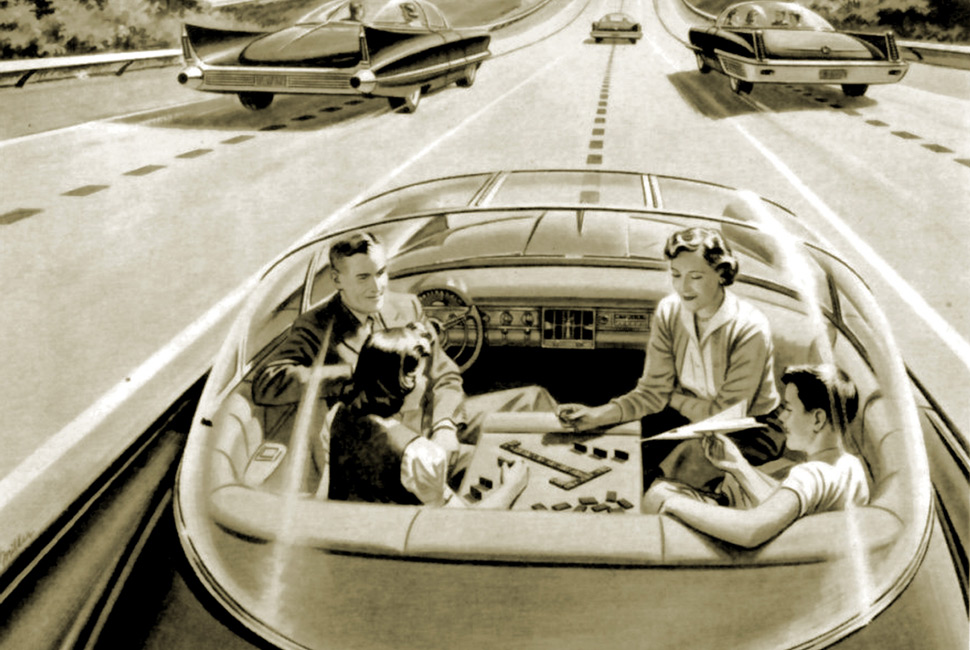 Advertisement from 1957 for “America’s Independent Electric Light and Power Companies” (art by H. Miller). Text with original: “ELECTRICITY MAY BE THE DRIVER. One day your car may speed along an electric super-highway, its speed and steering automatically controlled by electronic devices embedded in the road. Highways will be made safe—by electricity! No traffic jams…no collisions…no driver fatigue.”

You can use the rest of the car.

Similar to the above, thanks to autonomous tech there is potential to virtually eliminate distracted driving. On one hand, that sucks because it feels right to continually chastise drivers for texting or using Snapchat. But the fact is, they’re going to do all that anyway. If the car is driving for you — even in several-second bursts, like the tech already on the road — drivers can change the podcast, remove a jacket, apply lipstick and, yes, return a text. And the car will keep you on the straight and narrow.

It leaves the fun parts to us.

This is the best reason. There’s no way that analog cars are going to literally go away. I interviewed veteran journalist Matt DeLorenzo, and he equated this argument to horses. When the car replaced horses as transportation, horses didn’t go away. They became hobbies, things you ride and care for because you want to — for fun. I’ll be damned if some autonomous car is going to snake me through the Alps or up Pikes Peak.