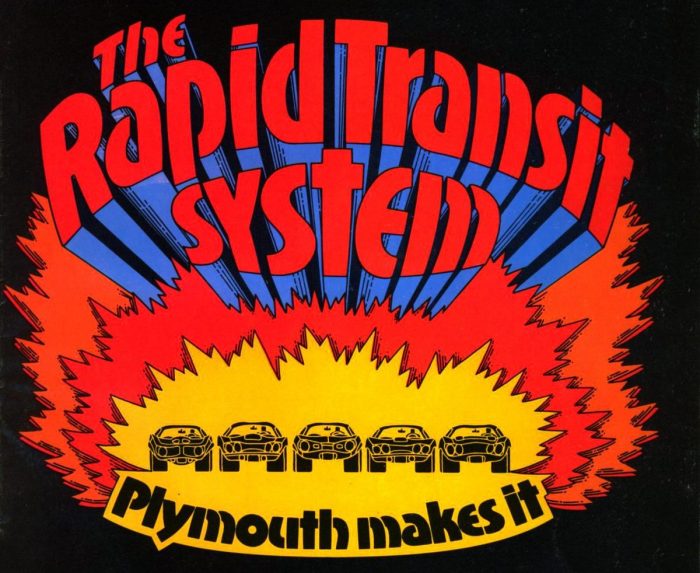 If you remember the 1970s, the saying goes, you weren’t there. For those that have forgotten the start of the decade that saw the death of the muscle car and the birth of disco, we offer up evidence of a once-magical time in the form of Plymouth’s psychedelic-covered Rapid Transit System brochure.

From the Duster 340 through the Sport Fury GT, the Chrysler division offered something for everyone with an affinity for laying down parallel strips of black rubber. Three of the five selections (the Road Runner, the GTX and the ‘Cuda) were even available with the legendary 426 Street Hemi, which produced a claimed 425 horsepower and 490 pound-feet of torque. Those wanting near-comparable performance with better day-to-day drivability could opt for the 440 6-bbl., which produced 390 horsepower and 480 pound-feet of torque and could be ordered in every “Rapid Transit System” vehicle except the Duster 340. 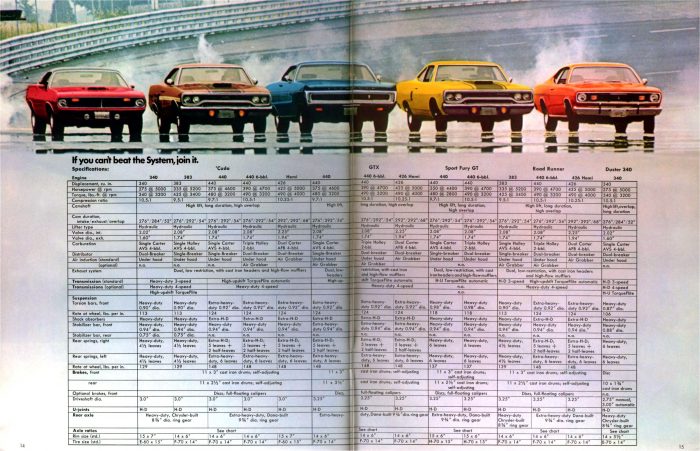 Even the Duster 340, Plymouth’s value-priced performance option, was no slouch, serving up 275 horsepower and 340 pound-feet of torque in a car that weighed in at just 3,110 pounds, or 285 pounds less than a ‘Cuda hardtop, the division’s next-largest offering.

And then there were the available Rapid Transit line options, including a Sure-Grip differential with a variety of rear axle ratios; custom graphics (like “Dust Trails” on the Road Runner); wheels and wheel covers; instrumentation; and more shades of paint than a Sherwin-Williams store.

Base prices for Rapid Transit System vehicles began at $2,547 for the Duster 340 and topped out at $4,501 for a ‘Cuda convertible with the 426 Street Hemi. A GTX with the same engine priced out at $4,246, but its lower-rent stablemate, the Road Runner, could be had for roughly $3,800 with the Hemi or $3,314 with the 440 6-bbl. At a time when jobs were plentiful, wages were good and gasoline was cheap, most of Plymouth’s Rapid Transit System vehicles were affordable for those working a 40-hour week.

The first muscle car era would come to an end just a few years after this brochure was printed, but the late 1980s would see the dawn of a new age of muscle cars. Today, Plymouth is gone, but the Hemi ‘Cuda’s spiritual successor, the Hellcat Challenger, serves up 707 supercharged horsepower for a base price of $62,495 (or $9,961 in 1970 dollars). For Mopar fans on a tighter budget, the latest Challenger SRT 392 still delivers 485 normally aspirated horsepower for a starting price of $49,195 ($7,841 in 1970 dollars), but we’d stop short of calling either example “affordable” for the average working man or woman.