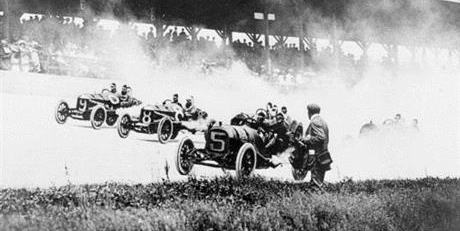 Now, 105 years after that first race and just before the start of the 100th Indy 500, the AP has released its original report from that fateful first race more than a century ago. The first Indianapolis 500 took place in May of 1911. 85,000 people gathered at the large banked oval of Pressley Farm on Decoration Day to watch the event, which at the time was called the International 500-Mile Sweepstakes Race. And the Associated Press was there.

As you can imagine, the language is charmingly dated, describing the race as “an enormous and desperate whirligig.” It also portrays a race that moved much more slowly than it does today. Ray Harroun, the race’s eventual winner, reportedly averaged 77 mph for the first 400 miles. Needless to say, the drivers will be going much, much faster this Sunday—James Hinchcliffe secured pole position with a 230.76-mph lap this year.

Of course, these were dangerous days in racing: The newspaper article reports one death and three gruesome injuries suffered during the course of the race.

After crossing the finish line, Harroun’s first recorded words were, “gee, I’m hungry.” It’s understandable why: Harroun’s racing day lasted six hours and 42 minutes. Which is probably why, after cinching victory, he said, “in my estimation the limit is reached at 500 miles and is entirely too long for the endurance of the driver.” And yet, more than 100 years later, here we are getting ready to watch another 500-mile race.

Head over to the AP’s website and read the rest of the report for yourself. It’s a fascinating look back at the race that started it all.