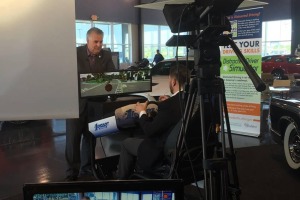 The simulators are housed at its Ford dealership and Used Car Factory. Users can experiment with making phone calls while the simulator sends fast-moving obstacles, like dogs, onto the virtual road.

COLUMBUS, Ohio — Ricart Automotive Group is inviting the local community to try a pair of distracted-driving simulators through June 30 to help drivers understand the consequences of bad behavior behind the wheel.

“I used it and it really shows you how taking your eye off the road for a second can cause an accident, land you on a medical life-flight and how your insurance rates will increase,” said Rick Ricart, vice president of sales and marketing and a third-generation dealer.

The simulators belong to Maria’s Message, a foundation that draws attention to distracted driving started by Dom Tiberi, an Ohio sports-media personality whose 19-year-old daughter died in an accident caused by distracted driving.

Ricart told Edmunds that he believes in the message so much that he’s purchasing one of the simulators later this summer to keep permanently in one of his showrooms.

“Driving a car starts with getting a car, so why not go to the source of where people buy automobiles and raise the awareness at the point of sale, letting them know we want to keep the driver and the car in one piece,” Ricart said.

Ricart takes the cause one step further and gives each new car buyer a coupon good for a daylong defensive-driving course through Bloom School of Driving Dynamics. The school operates every Saturday on the test track Ricart built behind its Mega Mall to let patrons test-drive models safely.

It’s all part of a good business model, he said.

“We have to have sold at least one vehicle so far, not because of the simulator or the test track, but because of what we do for the community itself,” Ricart said. “A dealership’s reputation is critical for the buying process. Anything we can do to continually increase our positive footprint in the community has an astronomical residual effect.”

Edmunds says: This dealership tackles one of the most pressing problems on U.S. roads today, enhancing its reputation as a true community partner.