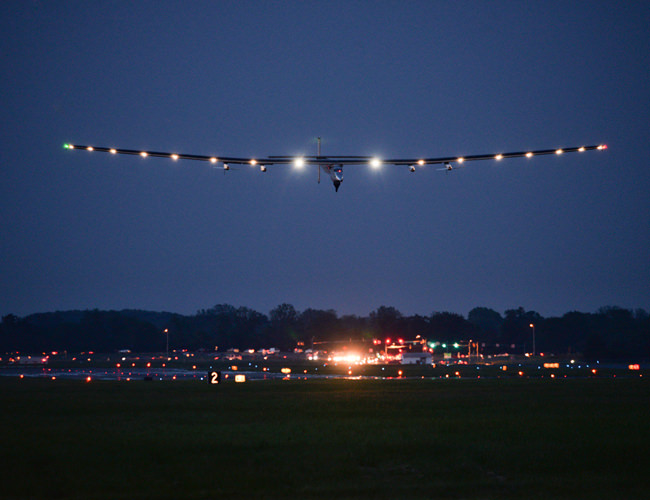 The solar-powered aircraft, with Swiss project founder Bertrand Piccard at the controls, had left Dayton, Ohio, some 16 hours before. Of course, if Piccard had merely driven that route, it would have taken him half that time. On May 25, Solar Impulse 2 arrived in eastern Pennsylvania — one of many stops in its slow airborne march around the globe.

But then, Solar Impulse 2 isn’t about speed, the usual key benefit of aviation. It’s about innovation: pushing the capabilities of solar technology, materials science, and aeronautics to the point that an airplane could successfully circumnavigate the globe for the first time on sun-sourced energy alone, flying both day and night. In fact, this traveling team of 60 crew members and its Monaco-based mission control center — in addition to Piccard and alternating co-pilot André Borschberg, also Swiss — is conducting what might be the most leisurely aviation research project in history. At full throttle, SI2 barely cracks 90 mph, and it cruises at just 60 mph most of the time.

Hence the stately pace. In fact, it began its globe-conquering mission in Abu Dhabi way back in March of last year. It has flown through India, China, Japan, Hawaii, San Francisco, and three other stops in the United States since then, cruising along just fast enough to stay in the air, but slow enough to manage power to its batteries and four electric motors, each spinning 13-foot-diameter propellers. (Overheated batteries delayed the flight through the winter while in Hawaii, which of course isn’t a bad place to be grounded.) Its flights often last days at a time in order to cross vast oceans, and it flies as high as 39,000 feet in order to maximize its intake of energy-producing solar light into the 17,248 photovoltaic cells covering the top of the wings, fuselage and tail assembly, which is necessary to charge the batteries enough for night-flying. While on the ground, the team often has to wait days or weeks before setting off again, in order to nail the best weather conditions for the lightweight, supremely twitchy airplane to fly. 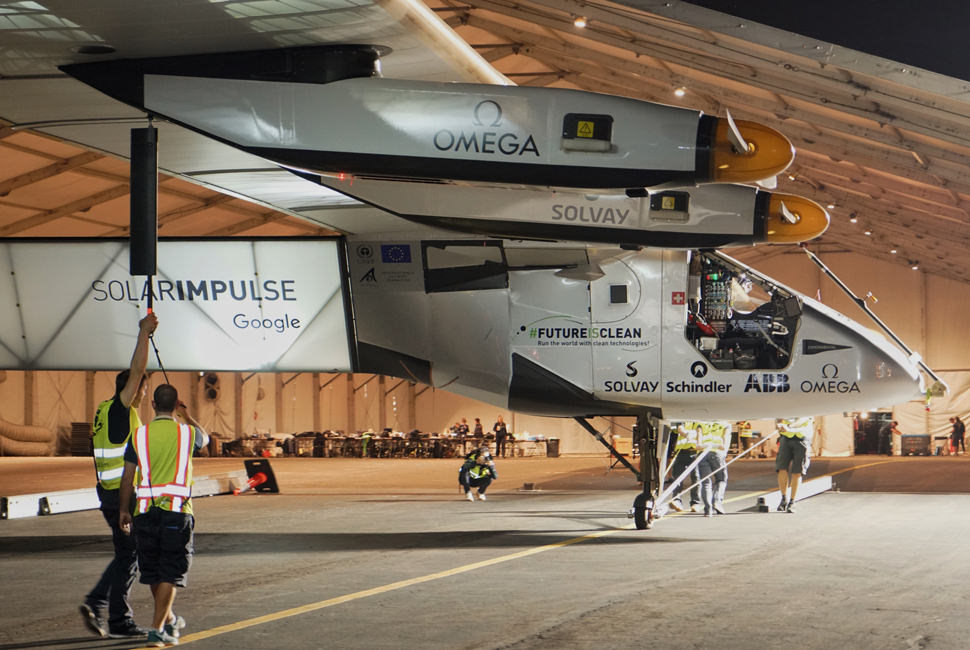 Because of the airplane’s own exceptionally unconventional flight characteristics, when it arrived in the vicinity of Pennsylvania’s Lehigh Valley International Airport — after circling for a few hours above Harrisburg to let winds die down — the effect was almost spooky. While enthusiastic fans gathered at the airport and by the side of the roads just off the runway to watch the landing, Piccard again circled, this time directly above us. (He needed to wait until sunrise before landing, since winds die down considerably at that point.) The wide airplane — with its 236-foot wingspan, greater than that of a 747 — seemed to hover in midair as it executed multiple lazy patterns, including several alarmingly precise and unnervingly slow 90-degree turns. Piccard just seemed to be walking around in the sky above our heads for an hour or so.

Meanwhile, on the ground, Borschberg regaled us with feats of aeronautical derring-do, including how they manage long flights (yoga, lots of cat-naps, and a toilet positioned directly under the seat), and describing the touchy flight characteristics of the SI2. “It’s got a wide wingspan, which makes it susceptible to wind and turbulence, and it requires a lot of hand-flying,” he said, gazing up at his friend floating in the sky above the runway.

Finally, the conditions were right for Piccard to bring it home. Over the course of 15 minutes or so, he flew downwind of the airport, turned on a dime and lined up for the runway. His approach was simultaneously the least suspenseful and most suspenseful aviation event I’d ever witnessed. Even though it was on final approach, it never seemed to actually get closer. Spectators that showed up late had time to park, set up chairs, and get comfortable for the landing all while the airplane covered the last few miles. I had boatloads of time to dial in my camera settings, and Borschberg continued chattering about the program even when the airplane was halfway down the runway.

Finally, touchdown. Several crew members riding on bicycles grabbed onto the fuselage of the light 5,100-pound airplane to slow it down, and SI2 stopped gently after a rollout barely 100 yards long. After crews walked the gangly bird up to the hangar, Piccard climbed out triumphantly and talked up his most recent flight and the mission overall. “The scenery was beautiful, the conditions gentle. It was perfect from beginning to end,” he said. And Piccard is optimistic that in the future, commercial aircraft could completely shun fossil fuels. “This is our hope: that all airplanes in the future will be electric,” Piccard said after the flight. “You have to dream, you have to believe you can have a better world, and that you can have new technologies to protect the environment. That’s the challenge of the 21st century, and that’s what drives André and myself and our team.”