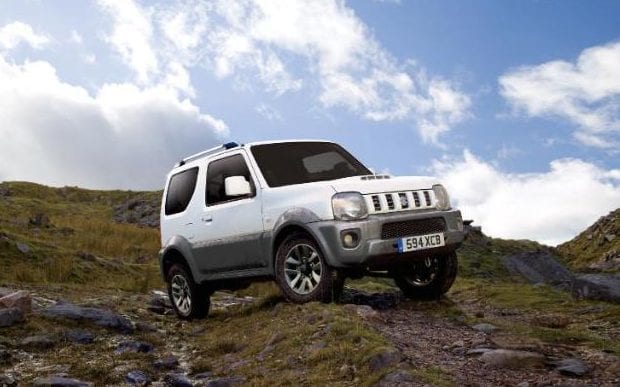 Suzuki Jimny review: a time capsule from the late Nineties

The year 1997 was a different, simpler time. Dolly the sheep, the first Harry Potter book, and a singles chart littered with the likes of Spice Girls, N-Trance and Dario G. In fact if you’d visited the Toyko Motor Show in early November that year, you might have been listening to Aqua’s Barbie Girl on your Discman.

You’d also have seen the then-new Suzuki Jimny launched. This chunky lightweight off-roader could hardly be more late-Nineties, but unlike its contemporaries – notably the Ford Puma, Subaru Forester, Land Rover Freelander and Jaguar XJ – it’s remained in production ever since.

Even more remarkable is that there’s still a market for these back-to-basics off-roaders, built as they are using previous-generation ladder chassis technology and very little regard for the niceties we’ve become accustomed to. The main appeal lies in its diminutive stature, which gives it a lighter footprint off-road and allows it to be more nimble than the generally massive cars that dominate the 4×4 market today. This is a proper off-road car in miniature but it’s important to remember that back in 1997, off-roaders were just that – utilitarian machines designed as tools rather than cars. The Jimny is more car-like than, say, a Land Rover Defender of similar vintage, but only just. It has a side-opening rear door, which makes it hard to access the boot, and the rear seats are extremely hard to clamber in and out of.

You’re better off folding those back seats down for better load space, rather than subjecting anyone to the tiny rear accommodation. Those in the front are better served, with more space (particularly headroom) and a sensible number of cubby holes. The steering wheel stays where it is, means it’s in the wrong place for a lot of users. The same is true of the pedals which, granted, aren’t adjustable in any other car either, but which in the Jimny are noticeably offset. Due to the scaled-down nature of this Suzuki the pedals and footwell are quite small, making it a hard car to drive in bigger shoes or boots.

Once on the move the Jimny’s off-road roots are evident, with a bouncy ride and noisy engine. At motorway speeds the stereo loses battle against a potent mixture of engine drone, road roar and wind noise. That the dash has barely changed since the Jimny’s introduction in 1998 tells you all you need to know. It’s basic and dated but also hardwearing. It is now available with a touchscreen in the top-level trim, but it feels like an aftermarket retro-fit rather than a real option. It freezes from time to time, and the sat-nav occasionally loses its thread. The bluetooth connection is easy to use but the quality of the hands-free kit makes it unusable when the car is in motion.

However, this is also about being fit for purpose, and so it is good to see that the rest of the controls are obviously placed, with big, chunky buttons that you’ll be able to hit even when traversing a mountain range or wading through a swamp. The car judders too much for the touchscreen interface to be any use, but everything else is pleasingly basic. 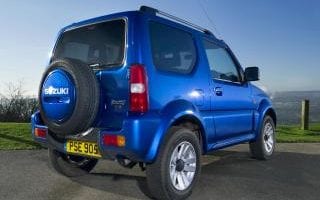 The Jimny’s age means it’s much smaller than most modern cars. When you consider the size of new models, especially those equipped with proper 4×4 ability, this Suzuki is tiny. As a result, it’s a doddle to park, and quite easy to move around town in congested streets. While its visibility is largely good, those exaggerated B-pillars create blind spots that are uncommon on such tiny vehicles.

The manual gearbox is light enough, if not particularly precise (an auto is also available), but the steering requires a lot of turning to get it from full left to full right, and the car takes a while to respond to your inputs. But it’s off road where it shines – it’s easy to engage four-wheel-drive and low-range, at which point it becomes one of the most useful small SUVs on the market.

Hilarious off-road, less so on it On the road, the Jimny like a miniature Defender, with a bouncy ride, slow steering, spongy brakes, intrusive engine noise, poor motorway refinement and lots of wind noise. The only engine choice is a 1.3-litre petrol with just shy of 84bhp, which delivers a puny top speed of 87mph and slow acceleration of either 14.1 seconds or 17.2 seconds, depending whether you select the manual or automatic gearbox. But just like a Defender, its idiosyncratic on-road behaviour is somewhat forgiven when you try it off road, where it’s brilliant.

We wouldn’t usually mention a car’s ability off the road, but with the Jimny it’s impossible to resist, because its low-range gearbox, 19cm of ground clearance and short overhangs front and rear make it wonderfully capable.

The Suzuki Jimny has been built to cope with serious off-road use. The engine and gearbox are also well proven, to put it politely, and the three-year, 60,000-mile warranty is a match for any other vehicle of this type. Suzuki has a good reputation for reliability and it’s this dependability that has kept the Jimny in dealerships for so long.

You can do much better for this kind of money 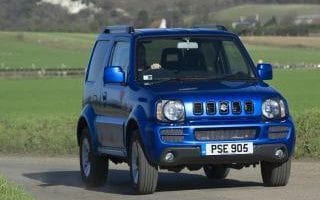 Despite using a small and reasonably efficient petrol engine, the Jimny is also as aerodynamic as a brick, not to mention weighed down by its four-wheel-drive hardware. The result is an official fuel economy figure of 38.9mpg in EU tests. Yet another reason why, if you don’t plan on exploiting its off-roading credentials, there are far better options for the money.

Depends what you’re looking for

Within the specific context of off-roading, it’s hard to beat the Jimny. No other new car offers quite as much capability at this price – in fact if you want anything approaching the Jimny’s mud-plugging prowess, you’re looking at a much bigger car. That said, the Fiat Panda 4×4 is adequate for many users, and it’s a lot more refined on tarmac.

The Jimny’s 9,000-mile service intervals are rather short by today’s standards, but the services themselves are reasonably priced, and the insurance groups low. It’s a shame the same can’t be said of CO2 emissions, which at 162g/km for the manual and 167g/km for the auto are significantly higher than those of other small cars.

Heavy depreciation also means that leasing costs are high, but buyers may wish to explore the nearly-new market.

A long way behind modern standards

Electronic stability control is standard as well as a tyre pressure monitoring system, but that’s where the good news ends. With only two airbags the Jimny lags behind other small cars, and while it hasn’t been tested by crash safety experts Euro NCAP, its dated design doesn’t bode well.

Worth upgrading to SZ4 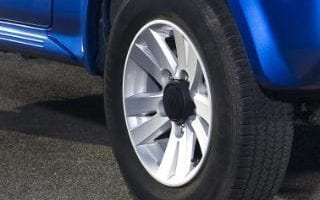 The Suzuki Jimny’s spec reads pretty well… until you remember it’s no longer the 1990s. A CD player and electric windows are not the kind of things to boast about these days, but that’s precisely what Suzuki does with the base model (along, of course, with its four-wheel-drive hardware).

Better to spend a little extra and go for SZ4 spec, which adds alloy wheels, privacy glass, body coloured door handles, air-conditioning, a leather-bound steering wheel and leather seats. The sat nav available on the ‘Adventure’ trim isn’t worth crowing about, so plan to use your own unit instead.

Options you should add None

If you live in the wilderness, or perhaps on a farm, and need a cheap, dependable runabout that’ll cope when the terrain gets tough, then a Jimny is a fine choice. For something to use purely for on-road driving, however, it is well below average.