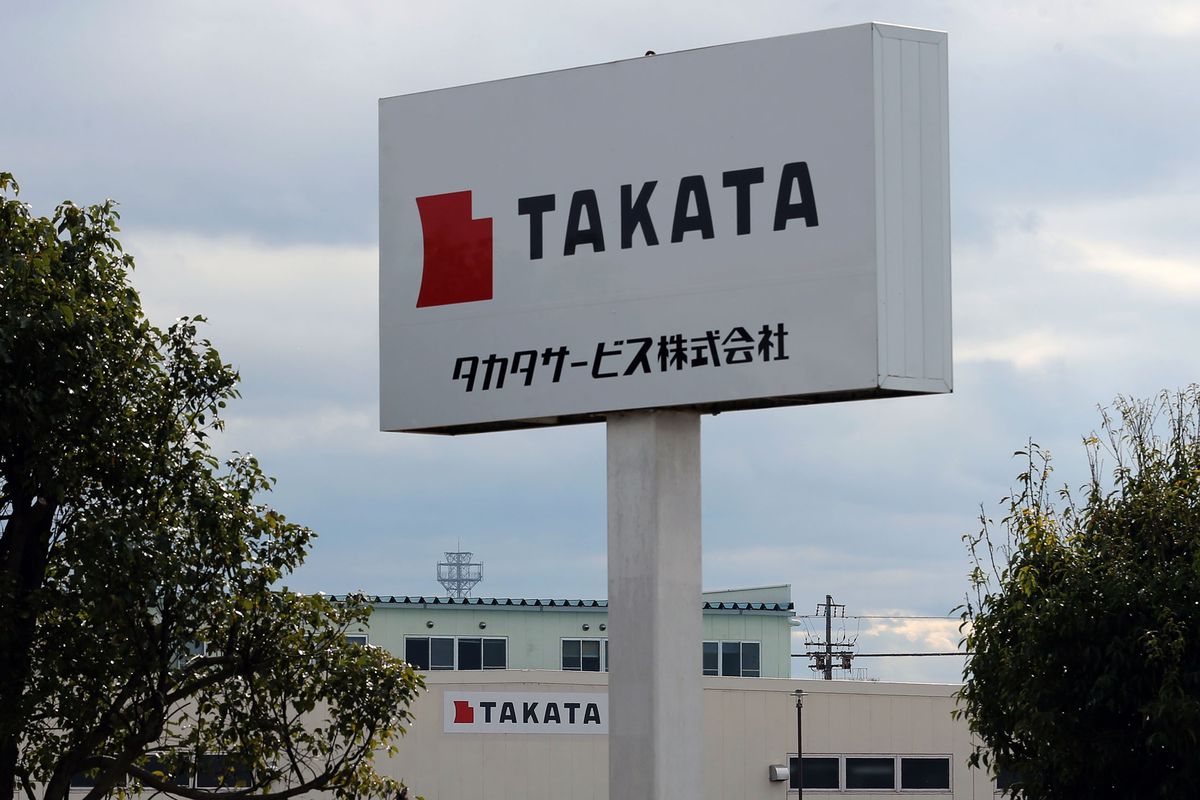 The bankruptcy of troubled air-bag maker Takata Corp. isn’t just a crisis for its employees and suppliers. It also throws a wild card into one of the biggest and most complicated recalls in automotive history.

The auto-parts supplier has pledged to recall and replace tens of millions of defective air-bag inflators used by 19 car and truck makers around the world, from Tesla Inc. to Toyota Motor Corp. Takata filed on Monday for bankruptcy protection in the U.S. and Japan and announced a takeover by Key Safety Systems Inc. for 175 billion yen ($1.6 billion).

The filing to restructure, which listed more than $10 billion in liabilities, doesn’t relieve a manufacturer of recall responsibilities. However, should its financial assets be exhausted before all the work is done, carmakers may have to cover the difference.

Funds raised by the asset sale would go toward funding Takata’s production of replacement parts, Rasmussen said. U.S. law treats a manufacturer’s recall obligations in bankruptcy as a claim of the U.S. government and they receive priority "to ensure that consumers are adequately protected from any safety defect" in a manufacturer’s products, according to statute.

“The big risk,” Rasmussen said, “is how much are the assets worth versus what’s the cost to do the replacements.”

Scott Upham, president of Valient Market Research, estimates that automakers and suppliers globally face $5 billion in future costs tied to the recalls, about $2 billion of which can be tied to Takata. The company has a market value of about $120 million and already faces debt and penalty obligations that are more than double its cash. Upham estimates a Takata asset sale will generate about $1.5 billion to $2 billion.

“There’s not enough money,” Upham said. Automakers may have to cover any shortfall, he said.

The car companies have already shifted business away from Takata and toward rivals for about 70 percent of the parts to repair the millions of vehicles recalled for the company’s defective airbag inflators, which can explode with too much force and spray drivers and passengers with metal and plastic shards. That should assure enough new inflators for the estimated 100 million defective ones forecast to be replaced worldwide.

Only 38 percent of the 43 million air bag inflators under recall in the U.S. had been repaired as of May 26, according to data on the U.S. Department of Transportation’s National Highway Traffic Safety Administration website. In Japan, 73 percent of the close to 19 million air bags under recall have been repaired, a spokesman at the country’s transport ministry said this month.

Prior story: Takata Rises as Carmakers to Pay $553 Million Over Recall Losses

At least 17 deaths have been linked to the devices worldwide. Mounting liabilities associated with the faulty airbags have forced Takata to seek a buyer that would see it through a costly restructuring process. A Takata steering committee earlier this year recommended Key Safety Systems — the U.S. air-bag maker owned by China’s Ningbo Joyson Electronic Corp. — as the preferred bidder.

The challenges for the acquirer are manifold. Takata posted its third-straight annual loss even without including the full costs of repairing millions of air bags, which automakers are now paying for. It faces a talent exodus and auto industry distrust.

“It would be hard for Key Safety Systems to put in huge amounts of money if there’s no guarantee against unexpected liabilities, after any deal,” said Mitsuhiro Harada, a researcher at Tokyo Shoko Research. “Takata is making money in non-airbag operations, so if they can drastically cut recall-related debt through bankruptcy, they can surely revive soon.”

“We are working with suppliers to ensure a steady supply of replacement inflators for our customers,” said Kelly Stefanich, a Toyota spokeswoman in Princeton, Indiana. “We don’t anticipate any supply disruptions at this time.” Honda Chief Executive Officer Takahiro Hachigo said at a June 16 media briefing that the automaker hasn’t heard any specifics about the Takata bankruptcy plan.

The Japanese government has said it’s focused on completing the recall process and ensuring there’s no disruption of the supply chain.

In the U.S., NHTSA has been coordinating the pace of recalls and the flow of parts under a legally-binding 2015 agreement with Takata and 19 companies. That pact, NHTSA said, "is designed to deal with future contingencies, including the possibility of additional recalls, new information about the cause of the ruptures, or interruptions in the supply of replacement inflators."

"The automakers, the government, Key Safety Systems and Takata will come to an agreement to keep supplies flowing," Upham said. "The No. 1 priority is the safety of the driving public, and I think everybody realizes that."

Why It Seems Like Open Season on Car Companies: QuickTake Q&A

Honda first started recalling Accord and Civic models in 2008 due to the flaw that may end up being Takata’s undoing. The supplier’s inflators use ammonium nitrate propellant that can be rendered unstable after long-term exposure to heat and humidity. That same year, Takata began adding a drying agent to its propellant formula in an attempt to fix the problem. It has until the end of 2019 to prove to U.S. regulators that those air bags are safe.

Honda now uses no Takata-sourced inflators for recall repairs in the U.S., and none of the company’s new vehicles in mass production worldwide use Takata inflators with ammonium nitrate propellant, said Chris Martin, a Honda spokesman in the U.S..

Opting for bankruptcy protection in Japan and the U.S., as opposed to a court-led restructuring, should ensure there’s “minimum negative impact to the airbag supply chain for automakers,” said Takeshi Miyao, an analyst at Tokyo-based market researcher Carnorama. He predicts the procedure would take two months in a best-case scenario, but would more likely need half a year.