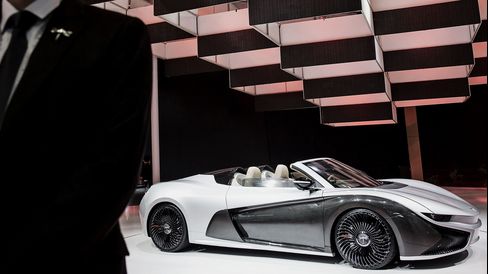 Qiantu Motor, set up by car design company Beijing CH-Auto Technology Co., is currently building a factory in the eastern city of Suzhou to produce the electric car with a carbon-fiber body and aluminum frame, Chairman Lu Qu said in an interview. The sports car, K50, is to debut next year with a starting price of about 700,000 yuan ($106,000), he said, comparable to Tesla’s Model S, which is made of aluminum. The price is about a third of the BMW i8, which also features a lightweight carbon-fiber body that improves performance.

One of China’s biggest homegrown automotive design firms is taking the plunge into producing its own electric roadster, seeking to stand out from the gaggle of Chinese electric vehicle startups, as well as Tesla Motors Inc., by making a car with materials found more commonly in business jets and mega-yachts.

“We are learning from Tesla as well as all the other electric carmakers,” said Lu, 48, a former Jeep engineer who left Beijing Jeep Corp. in 2003 with some colleagues to start Beijing CH-Auto. “We are aiming at building high-performance cars, and there’s no other option but to build our own factory, because there isn’t a plant in China that has a carbon-fiber molding workshop.”

Tesla sold 3,025 Model S and Model X cars in China in the first three quarters of 2015, though the Palo Alto, California-based electric carmaker would like to be a far bigger player in the world’s largest vehicle market.

For a QuickTake explainer on electric vehicles, click here.

Qiantu’s success will ultimately depend on marketing and reputation, according to Steve Man, a Hong Kong-based analyst for the auto industry at Bloomberg Intelligence.

“It will take a lot of patience and capital to build a consumer standing that is time-tested,” he said. “Let see if it has staying power.”

Electric vehicle making is a crowded field in China, with almost every carmaker rolling out models to meet stricter emission and fuel-economy rules in a market that the government has targeted to expand 10-fold from last year to 3 million units by 2025.

The government heavily subsidizes electric vehicle buyers if they buy locally made cars, as much as 100,000 yuan in some cities. Tesla currently doesn’t manufacture in China, though founder Elon Musk said earlier this year that the company was looking for a partner to do so.

Among the other Chinese aspirants are Chehejia, backed by the founder of China’s premier car-buying portal, Autohome Inc. It plans to introduce electric vehicles including an SUV by the end of 2017. Internet service portal Tencent Holdings Ltd. and electronics contract manufacturer Foxconn Technology Group have backed a new vehicle maker called Future Mobility.

The wave of investment has made the electric and self-driving arena an increasingly crowded one, Musk told Recode’s Code conference last week.

“There’ve been so many announcements of autonomous EV startups. I’m waiting for my mom to announce one,” he said.

Lu, a graduate of China’s elite Tsinghua University with a degree in automotive engineering, started his career at Jeep’s China operations. His Beijing CH-Auto, which counts Nissan Motor Co.’s China venture among its customers. Qiantu was created in 2015 as a wholly owned subsidiary to develop electric cars.

Qiantu will consider producing cars for other companies at 2 billion yuan ($305 million) factory, which will have an initial annual capacity of 50,000 vehicles, Lu said. The company is aiming for a 15 percent share of the electric vehicle market by 2020, or as many as 450,000 units, he said.