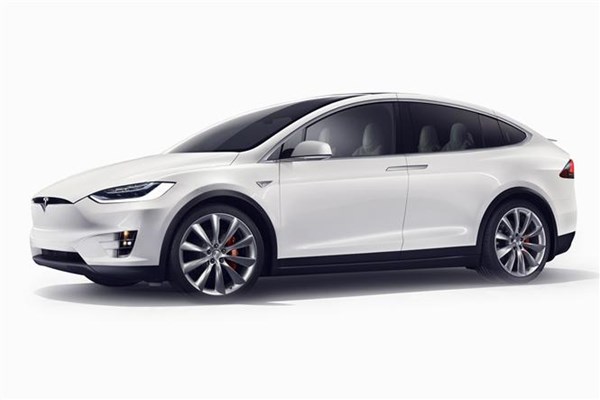 This is the new Tesla Model X, the American firm’s third car and the world’s first electric SUV.

Sharing many of its underpinnings with its smaller sibling, the Model S, the new X is revolutionary in terms of design, electric battery technology and futuristic cabin features. It doesn’t have any direct rivals, but premium SUVs such as the Audi Q7, Range Rover Sport and Volvo XC90.

Revealed at this 2016’s Geneva Motor Show, we had an exclusive walk-around with the Tesla team to find out more about this show-stopping new car.

Immediately noticeable are those eye-catching ‘Falcon Wing’ double-hinged doors, akin to something out of the Back to the Future films. Thanks to their design, there’ll be no risk of breaking your back fitting a car seat, and they can be operated either via the button on the key fob or simply by the numerous sensors fitted under the car’s skin, which can detect when you’re close by and open the doors automatically.

The modern design features don’t end there either. A huge curved windscreen that goes over the driver’s head is also incorporated, giving you a three-dimensional view of the road ahead.

Sleek and curvaceous, much has been done to maximise aerodynamic performance. There’s a huge duct at the front of the car which helps suck in air, while at the rear there’s a spoiler that can move into a trio of positions depending on the speed you’re travelling.

You can buy the Tesla Model X as a six- or seven-seat car. Opt for the former and the middle seat in the second row is removed.

Thanks to those fantastic doors, you don’t need to scramble into the rear seats and once inside we were pleasantly surprised with the amount of space on offer – only six-footers will really struggle for head and legroom.

You can fold the third row seats flat too, if you need to transport more luggage than people, and the seats are comfortable and supportive. Those in the middle row can recline their seats and there’s a choice of upholstery colours available including eye-catching white, tan and black.

Inside there’s a lot of advanced kit including the 17-inch touchpad infotainment system seen in the Model S and a combination of safety kit like a collision prevention system and automatic braking – even at motorway speeds. The cabin is futuristic and minimalistic and interior quality appears to be exceptional throughout.

The Model X is the world’s first electric SUV and in its quickest guise it’s also the fastest electric car you can currently buy, completing the 0-62mph sprint in just 3.2 seconds.

Driving the latter is a 259bhp front motor and a 503bhp rear motor combined with a 90kWh battery. Equally impressive is the total electric range of approximately 250 miles per charge, plus off-road capability thanks to the all-wheel drive system fitted as standard. We’ve not heard performance statistics for the lower-powered versions yet.

And the exciting news doesn’t end there; the Model X is also capable of towing up to 2,268kg – enough to accommodate a small caravan or trailer – something no other electric car has been able to do so far.

Tesla is yet to officially announce its UK pricing structure, however the range is already on sale in the US and starts at $80,000, so we expect prices here to start around the £60,000 mark.