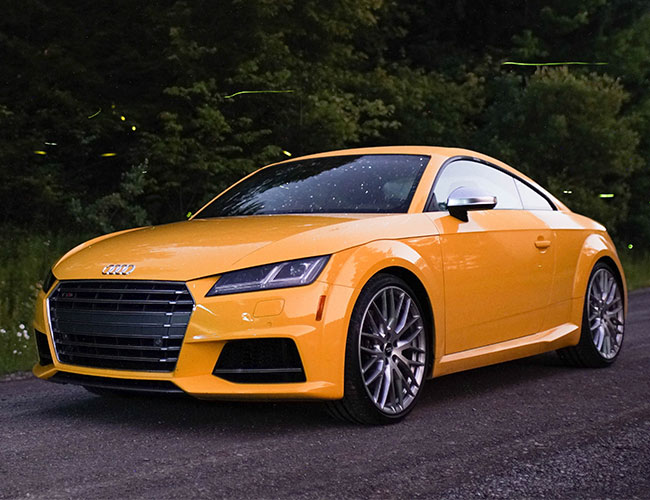 The 2016 Audi TTS now Is as Irresistible as Ever

The second was the arrival, during that same period of peak firefly ferocity, of an Audi TTS ($52,825), the gorgeously trim and recently modernized performance coupe, swathed in a color called Vegas Yellow. How could I resist? Sometimes an idea creeps into your head and just won’t leave. First, there were lightning bugs: I wanted to photograph a rare species of synchronous fireflies in Pennsylvania’s remote Allegheny National Forest.

The 500,000+ acre forest is one of only two places in the world that host populations of the special critters, which emit their mate-attracting glows in perfect unison during a brief period of activity each summer. I imagined portraits: yellow fireflies streaking around the sleek, yellow Audi; lush, green woodland in the background; moonlight trickling in from above. Would it look like a freakin’ Thomas Kinkade painting?

With little warning to my family, I loaded the TTS with camera gear, a tent, sleeping bag and a spray bottle of car detailer, then shot like a cannonball for the forest 250 miles away.

I had no idea if I could even get the shot. Firefly friskiness is unpredictable at best, and a geographic crapshoot within the forest, but I relished the challenge and the prospect of a satisfyingly long road trip in a fun new ride. Even if I came up empty-handed, it would still be a blast to try.

The S version of the 2016 Audi TT, now in its third generation, sports a four-cylinder, turbocharged two-liter that produces 72 extra horsepower over the standard TT for a total of 292 horsepower, and 280 lb-ft of torque. A light 3,230-pound curb weight makes for an impressive 4.6 seconds to 60 mph and some wickedly fast cornering, bolstered by magnetic ride suspension and aggressively tuned Quattro all-wheel-drive. The S is lowered by 10mm onto its 18-inch wheels compared to the standard TT, further enhancing cornering and aerodynamics.

Individual, one of the car’s four drive modes, enables drivers to fine-tune suspension, engine, and transmission settings. It let me carve up my route’s twistier challenges with an ease that seemed to match, or even exceed the new, also-turbocharged Porsche 718 Boxster I recently drove. The throttle powers and torques out of turns, the electrically boosted steering firm and precise. In Comfort, it floats down the highway such that the small, tight machine felt like a larger luxury tourer — a very good thing.

The TTS is a looker, too, thanks to its more menacing stance and, of course, the sharp yellow paint job — my ambition to create a photographic firefly-and-yellowness mashup notwithstanding, the car just pops. It draws eyes, with its primary hue and gray details. At a rest stop some guys in a huge pickup were checking out the TTS. We bantered a bit, though I chose not to divulge my specific goal of taking pictures of fireflies in the woods. Not that I’m insecure; I just didn’t have time for side-eye and heckling from random truck bros. My fireflies were waiting. 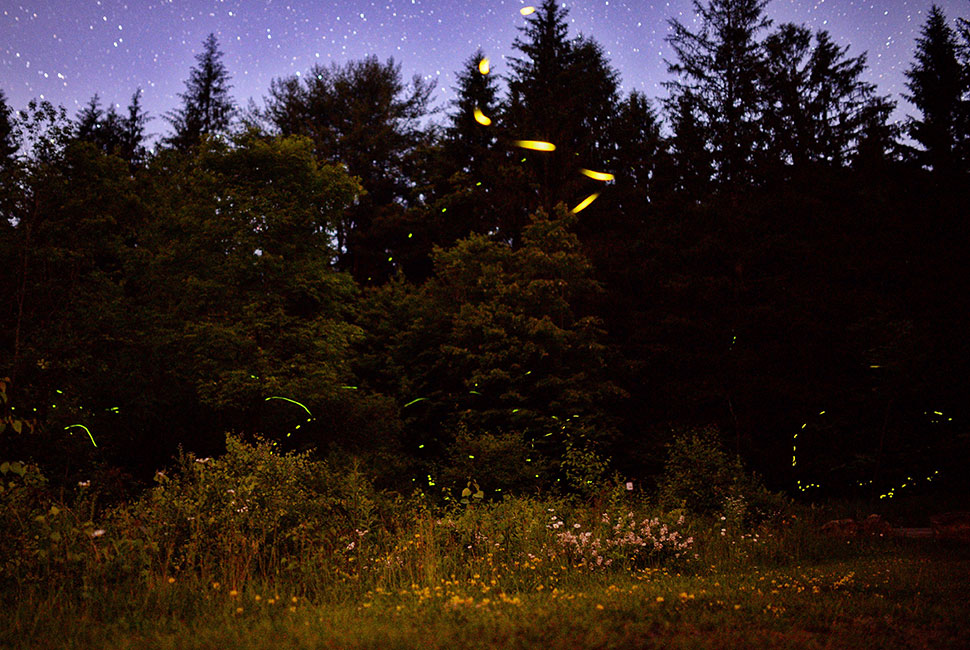 An hour later, I was in the park. Thanks to suggestions from local experts, my first target was a lake rimmed with tall evergreens, where I positioned the car and settled in to wait for the magical show. In recent years firefly populations have dwindled considerably due to pesticides, development, and light pollution There’s a festival in mid-June every year dedicated to the Allegheny delegation of these rare synchronous variants, and websites track their activity for enthusiasts. (By the way, I perused all this firefly intel on my smartphone while I waited via the Audi’s wi-fi hotspot.)

The final shots lay somewhere between the visions of sylvan idylls I’d had in mind and the lurid, Kinkadian heights of grotesque pastel perfection I feared.

I also used my downtime to peruse the car’s interior. It’s far cleaner and smarter than the previous-generation TT, with a very cool driver-focused screen that presents the entire instrument panel digitally. It’s a gorgeous system, though limited to only the driver’s use. Otherwise the minimalist interior is appealing, with tight leather and a nice new climate system that embeds the controls directly in the three large circular vents.

The sun set around 9; it was truly dark at 10. Right on cue, I caught a flicker of light out of the corner of my eye. Then another. Within minutes, the near-earth airspace was filled with flashing bugs. They weren’t in unison yet — that happens sporadically throughout the evening. But slowly they began to sync in pairs, then small groups, then little clusters of 10, 20, or more — firing off bursts of three or four flashes in perfect harmony, like Christmas lights strung haphazardly through an invisible shrub.

I was out of the car and waiting with my camera gear, working to dial in settings, using 30-second exposures with ISO and aperture high enough to record the firefly streaks but low enough to not overexpose the terrain around them. (It got even trickier when I tried to fold in the Milky Way above.) Then I aimed for the car, and made dozens of attempts to realize my vision. For two hours I swapped lenses and tinkered, waiting for good groupings of fireflies. When I surveyed the results I was thrilled: the final shots lay somewhere between the visions of sylvan idylls I’d had in mind and the lurid, Kinkaidian heights of grotesque pastel perfection I feared.

Nevertheless, I was so wired by the experience that I forewent the tent and just headed home. I motored back down 40 miles of twisty roads to the highway, then cruised off into the night, stopping once to doze in the Audi to take the sleep edge off, waking just in time for a nice smoky sunrise in the rural hills of Pennsylvania.

Not at all a bad way to spend twelve hours.

Tell You The First Step to Becoming a Rally Driver