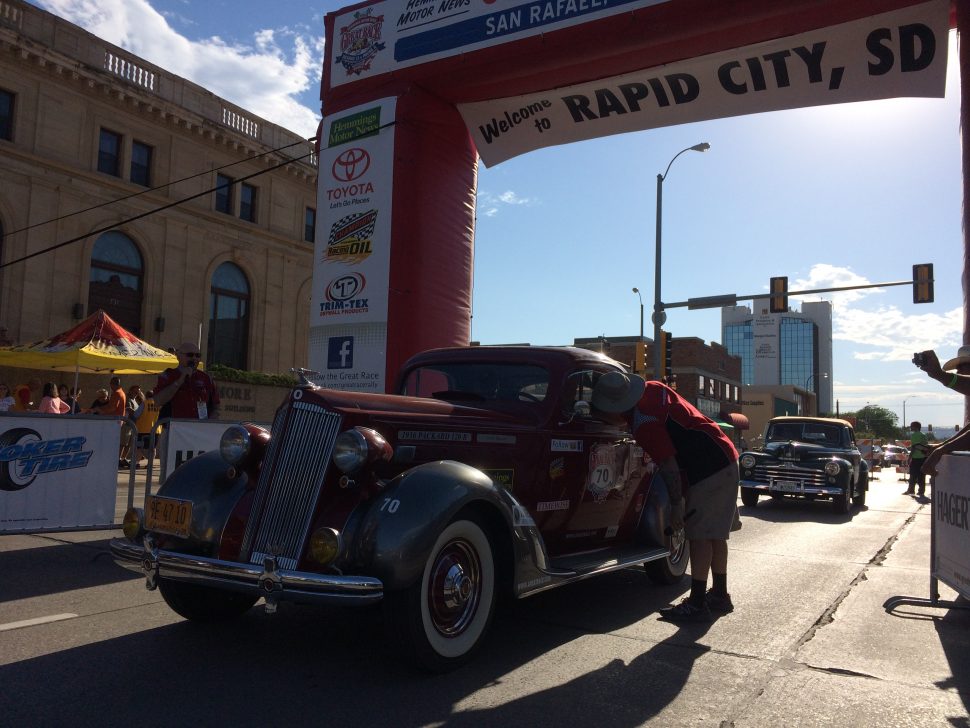 Six days in the books, three to go, and the race to claim the title as Grand Champion of the 2016 Hemmings Motor News Great Race presented by Hagerty is getting tighter by the mile.

Sportsmen Division veterans Bill & Carolyn Croker, in their 1936 Packard 120B Coupe, are welcomed to the day’s finish line in Rapid City, South Dakota.

Today’s five legs of the west-to-east trek traveled through Lusk, Wyoming, and then on to Rapid City, South Dakota; teams were able to make stops at several national parks, including Mount Rushmore. Extensive delays associated with road construction forced race officials to scrap the times from the third leg, which meant teams would only have four legs to perfect their clock/speed management skills.

When the last cars rolled through the finish line, the Stage Six overall winners were Expert Division veterans Louise & Jim Feeney – with a time of 4.98 seconds – in their ever popular 1934 Ford Fordor Deluxe police car. Right behind them in second overall with a time of 5.28 were 2006 Grand Champions Reeder & Stone. First among the Sportsmen and fourth overall were Hull & Stahl at 8.10 seconds off perfect, while in the X-Cup ranks it was once again the Ponca City Wildcats, finishing 12th overall, with a time of 11.16 seconds. Among the Rookies it was John & Parker Nirenstein (finishing 19th overall) at 12.68 seconds. Team Hemmings got back on track with a time of 16.20 for the day, putting them25th overall and 10th among the Sportsmen.

So how tight is it now for the overall win?

The Martins have a slim lead over Reeder & Stone, 31.04 to 35.64 seconds respectively. Sitting in third overall it’s 2004 Grand Champions Pike & Hadskey with a time of 38.94 seconds. First in the Sportsmen and nestled into fourth overall is Hull & Stahl at 43.74 seconds, while the Rookie leaders Frankenberger & Read  are in 13th overall 55.29 seconds off perfect. And then there’s the Ponca City Wildcats that have a tight grip on the X-Cup Division lead, sitting in 27th overall with a time of 1:30.21. Team Hemmings is still ninth in the Sportsmen Division and sit 24th overall with a time of 1:24.24.

Start time for teams is 7:00 a.m. once again as Stage Seven takes the remaining 90-odd teams from Rapid City to a lunch stop on Main Street in Chamberlain, South Dakota, before moving on to the finish line on Phillips Avenue in Sioux Falls, South Dakota.

For a full list of teams and scores, visit GreatRace.com.