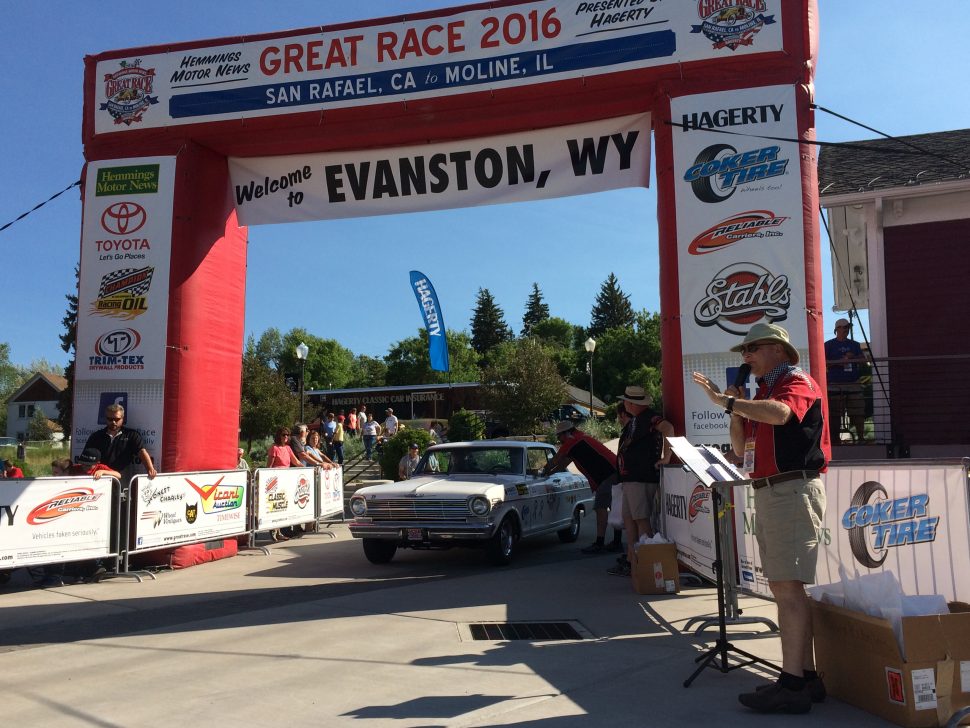 Stage 4 of the Great Race came to a close at the historic Roundhouse in Evanston, Wyoming, after teams had the opportunity to spend some time at the Bonneville Salt Flats just prior to noon. Several teams experienced an array of issues, such as overheating and blown head gaskets, while the overall leaders Gary & Jean Ann Martin’s Nova suffered a brief electrical fire.

1998 and 1999 Grand Champion Rex Gardner and grandson Kolton Hastert cross the finish line in Evanston in their 1962 Chevy Nova. Photo by author.

In spite of the fire, Gary’s quick response and fast repair kept their Nova in the overall and Expert Division lead with a cumulative time of 16.49 seconds. This year’s battle for the $50,000 first place prize is shaping up to be a tough one: sitting second overall and first in Sportsmen currently is Habetz/Regan at 24.96 seconds and in third overall and first among Grand Champions is Pike/Hadskey at 26.40 seconds. Remaining in 8th overall and 1st in Sportsmen Rookies is Frankenberger/Read at 35.89 seconds. Ponca City Wildcats still top the X-Cup entries (and is ranked 34th overall) with a cumulative time of 1:11.61. Team Hemmings is still in the running among the Sportsmen entries, sitting 10th in class and 24th overall with a time of 52.65 seconds.

By the time this report lands in your inbox, the first cars will be departing Evanston, continuing east to a lunch stop at The Depot in Rawlins, Wyoming, before continuing to an overnight stop in Cheyenne; the day’s finish line located at the Cheyenne Depot Museum.