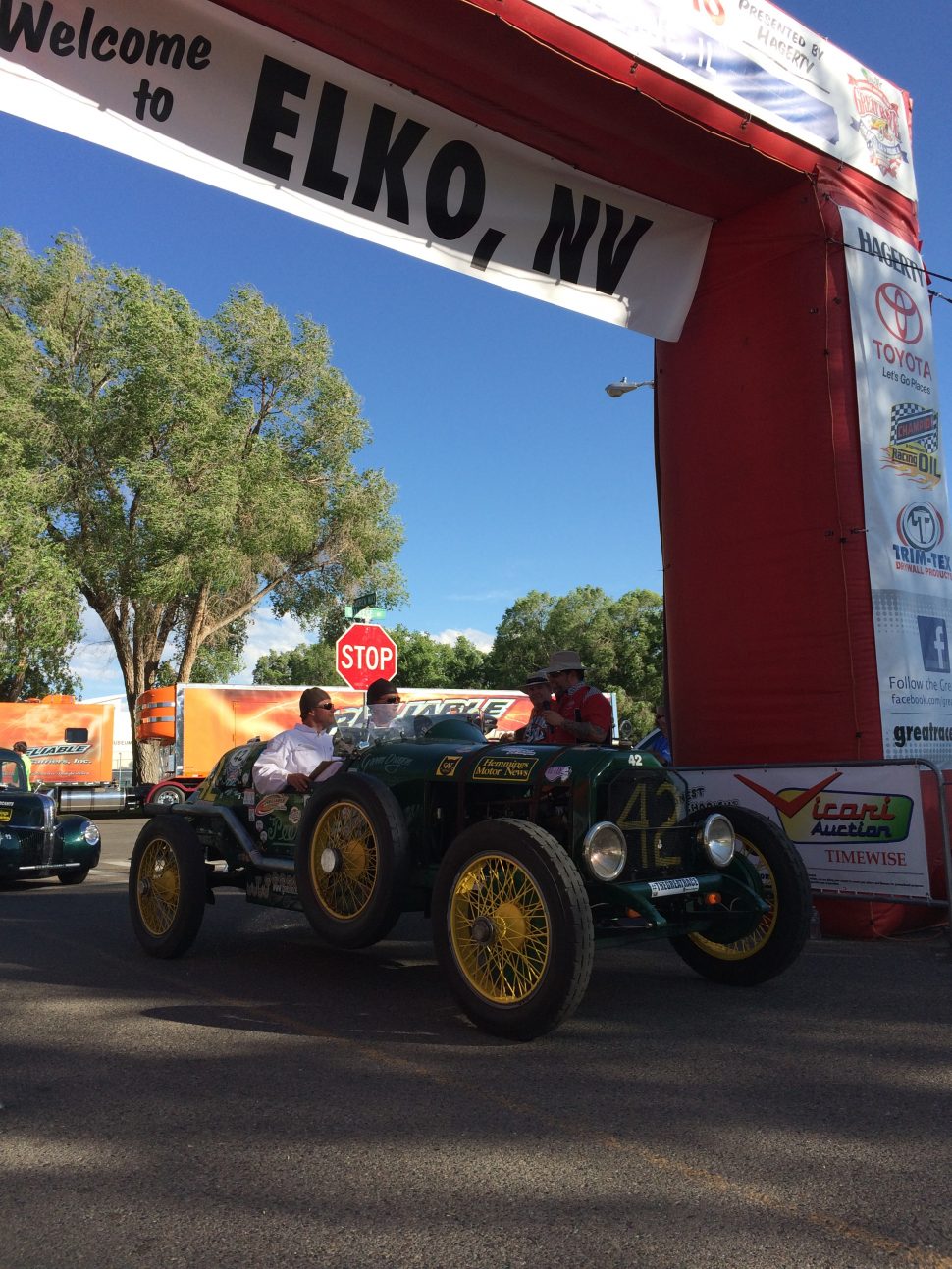 Elevation was the one word spoken among racers, climbing well above 7,000 feet along their route. At the end of the day beating the field was the former Grand Champion winners of Reeder & Stone in their 1916 Hudson 4-passenger Speedster with a time of 7.26 seconds. Stage Two of the 2016 Great Race took teams from the overnight stop in Sacramento, California, to Reno, Nevada, via lunch in Gardnersville, Nevada.

Other class winners were as follows: Expert contenders Robert & Alex Dinges with a time of 9.36 seconds in their 1928 Ford Model A (good for 3rd overall on the day). The always-challenging Sportsmen division was won by Josh Hull & Trevor Stahl at 14.58 seconds in their 1932 Ford Speedster, also good for 5th overall. I. The Sportsmen Rookie ranks it was Team Spratling, with a time of 23.00 seconds, placing them 17th overall. And Team Alabama won the day in the X-Cup division with a time of 23.49 seconds, or 21st overall. Team Hemmings put together another solid effort, finishing 18th overall and 6th in class with a time of 23.49 seconds. This in spite of running hot due to a failing head gasket, which was changed later that evening.

The cumulative scores after two days of competition are as follows:

On day three nearly 100 cars answered the starters orders, continuing the trek east through Austin, NV, to an overnight stop in Elko, NV. Experts Robert & Alex Dinges put in a best time of 5.46 seconds. Reeder & Stone continued to remain strong I. The Grand Champion category with a time of 9.24 seconds putting them 3rd overall for the day. In Sportsmen it was Craig Rubright & Garrett Jenkins in their 1937 Ford Tudor Sedan with a time of 10.29 seconds, enough to put them 4th overall. John & Parker Nirenstein claimed the Rookie (and 12th overall) class with a time of 13.65 seconds in their 1965 Shelby G.T.350. In the X-Cup division, car #137, a 1929 Ford Model A from Galax, Virginia, took the day’s win. Team Hemmings came in 27th overall and 13th in the Sportsmen class with a 23.49.

So after three already scenic days of the legendary rally, the overall leaders are still the Martins (Experts) with a time of 14.55 seconds. Reeder & Stone still head the Grand Champion class at 21.78 seconds, putting them 3rd overall, while Sportsmen Habetz & Regan (4th overall) lead that division. Rookies Frankenberger & Read at still ahead of the class at 31.04 seconds, or 8th overall, and the college team from Ponca City continue to lead X-Cup with a time of 55.80 seconds, or 21st overall. The Hemmings 1932 Ford Speedster is still in the hunt in the Sportsmen class, now ranked 10th with a time of 43.74 seconds, putting them 22nd overall.

For more details on this year’s journey, visit GreatRace.com.