You are here: Home  /  Auto Tech  /  The Argo LX atually is an ATV That Swims
Auto Tech 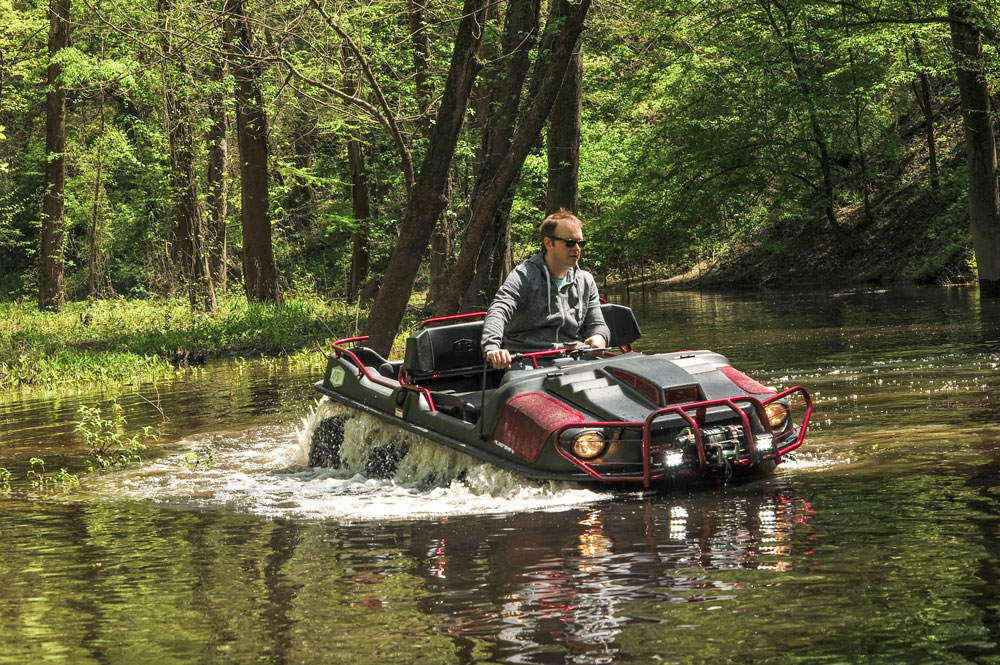 The Argo LX atually is an ATV That Swims

You eye the bilge-pump switch, just in case, then twist the motorcycle-style throttle and splash in. The jostle of the trail is replaced by the serene glide of buoyancy. The treads on the eight tires become paddles, churning like oars on a Viking galley. Congratulations: Your ATV is now a boat. ou’ve been told that the Argo LX floats, so you stay on course toward the water, fighting the instinct to grab the brakes.

Argo’s been building amphibians in Canada since 1967, catering primarily to commercial customers like power companies that need to access remote pipelines or municipalities that’ve experienced a natural disaster. New Jersey ordered some after Hurricane Sandy. But there’s also a brand of recreational outdoorsman—duck hunters and swamp-based survivalists, for instance—who prize a vehicle that can traverse otherwise impassable terrain. For them, Argo created the LX, which is spruced up with a few comforts unavailable on the commercial models. It’s not exactly a Bentley of the bayou, but you do get a four-speaker stereo, a USB jack, and snazzier upholstery. The red anodized brush guard and 3,500-pound winch up front look pretty sweet, too.

Mechanically, Argo keeps it simple. There are no Transformer-like articulations to transition betwixt land and sea. There’s no suspension except the cushion provided by the ultra-low-pressure tires. There’s no steerable axle: Directional changes are effected by the trusty skid-steer method—speeding up or braking either side’s wheels, like a tank. It even has optional crawler treads, which can distribute its 1,400 pounds so evenly that you can drive over ground that’s too soft to walk on.

In the water, the Argo’s front end sits lower than the rear bumper—er, stern. That’s by design. First, running nose-down puts each row of tires at a slightly different height in the water, which helps minimize cavitation (meaning, the third axle isn’t spinning away uselessly in the frothy churn of the first and second sets of wheels). Second, the Argo can accept a 10-hp tiller-steer outboard motor on the back for faster movement through the drink. If you’re sitting in the back and steering, the center of gravity moves closer to the middle of the vessel. Finally, the tail-high posture means that the rear end is already halfway out of the water when you need to execute a quick landward climb. If you’re driving on ice and break through, that’s how you get out—in reverse.

In boat mode, the Argo has a top speed of about 4 mph, which means you need to be mindful of currents and plan your exit before splashing in. On land, the 30-hp V-twin propels the 8×8 to 25 mph, which feels plenty fast for a skid-steer. You should also be careful with how hard you turn the handlebars. Ask for max turning at max speed and the LX will toss you like an irate bronco. But keep it moderate and you find that eight-wheel drive will deliver you anywhere you care to go.

It’s a unique beast, the Argo. At $27,295, it’s priced against the most expensive recreational off-roaders. But what other machine can ferry 900 pounds across the Mississippi while cranking tunes and charging your phone? Your choice is this or a Kawasaki Mule towing an airboat.

Practicality aside, plunging into a body of water in a land vehicle is just ridiculous fun. It feels wrong. You’re Keith Moon sending the Rolls-Royce into the swimming pool, except, in this case, there are actually two gratifying moments: first when you drive into the deep, and then when you climb out the other side, back on solid ground, morphing from boat to ATV like it’s the most natural thing.

*This story origionally appeared in the July/August 2016 issue of Popular Mechanics.