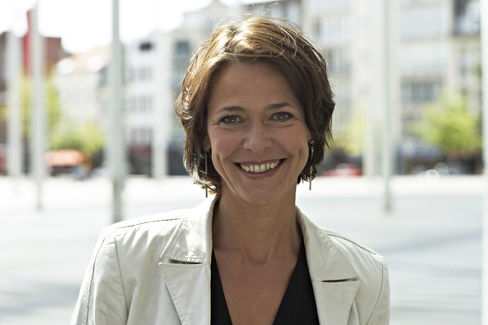 The 46-year-old Belgian Socialist is leading a European Parliament committee set up in December as a response to Volkswagen AG’s cheating on tests of smog-causing emissions. Van Brempt says her goal is to draw common lessons about better EU lawmaking and put more effective rules in place rather than to point fingers at regulators or manufacturers and see heads roll.

She thinks the European Union has too many diesel cars, the air in EU cities is too dirty and the future of road transport is electric. Meet Kathleen Van Brempt, head of an EU emissions-investigation panel who insists she has the auto industry’s best interests at heart.

Van Brempt’s don’t-rock-the-boat approach reflects the political pragmatism needed in an EU characterized by national rivalries, a balance of power and automakers’ clout. She says a consensus-based view also happens to be the best way to restore consumer confidence after the “dieselgate” scandal, which has led to the recall of millions of vehicles, prompted national probes into possible emissions deception by other manufacturers and undermined the credibility of EU environmental rules.

“There’s a sort of collective responsibility,” Van Brempt said in an interview in her office in Brussels on Monday. “It’s a collective blindness on the implementation and enforcement of the rules. We need to report all the facts and figures in a very systematic way and use them to get better law, close the loopholes and get enforcement in place at European level.”

In the EU, shining the spotlight on an industry that employs more than 12 million people and on European and national regulators who share responsibility for applying Europe’s nitrogen-oxide limits is politically sensitive. It’s all the more so when the country at the center of attention is Germany, Europe’s No. 1 economy and the home of Volkswagen.

VW’s cheating, which the U.S. uncovered and led Germany to order an EU-wide recall of 8.5 million Volkswagen vehicles, threatens a European “clean-diesel” strategy dating to the 1990s. Diesel causes more urban pollution than does gasoline while having less global-warming impact.

As a result of the fuel policy, more than half of new cars in western Europe are powered by diesel and EU nations are struggling to meet clean-air goals meant to reduce human sicknesses and premature deaths.

“Our car manufacturers maybe have spent too long looking for clean-diesel solutions instead of for modern, affordable, electrified systems,” said Van Brempt, who resides in the Belgian port city of Antwerp and is a former Flemish transport minister. “That’s not in the mandate of this committee, but whether there is something like clean diesel is a very interesting political question that will be part of the discussion, no doubt.”

The issue is so politically thorny that Van Brempt’s inquiry committee faced opposition from the start as the EU Parliament’s Christian Democrats, the German-led faction that is the assembly’s biggest with almost a third of the seats, opposed the panel’s creation.

Van Brempt, whose group is the No. 2 in the EU Parliament, said the inquiry committee has since gained cross-party support for work that will culminate with a report at the end of this year or in early 2017 on Europe’s regulatory failings. Calling the detection of European emissions-technology cheating in the U.S. rather than in Europe “rather embarrassing,” she signaled that the Christian Democrats share the goal of patching up the EU system.

“It took some time for them to adjust to the idea,” Van Brempt said. “Their big fear is that we would harm our own industry. Don’t you think I’m concerned about our industry and the people working there? If I’m talking about the car of the future, I would want that car to be built in Europe.”

To prepare its report, the inquiry panel is holding a series of hearings with environmental experts, regulators and industry representatives. The committee plans to ask the chief executive officers of Volkswagen, a French carmaker and a Japanese producer to appear before August, according to Van Brempt, who said the panel might have to settle for company representatives at a lower level.

Meanwhile, she has to confront another obstacle within the EU Parliament: work by the assembly’s internal-market committee on draft legislation that seeks to establish greater European authority over the approval of car models. Were deliberations on that proposal to proceed faster than the work of the inquiry committee, Van Brempt could find her panel sidelined.

She said the “right thing” for all involved in the EU Parliament is to let the inquiry committee reach conclusions that could be incorporated into the draft legislation. Asked about the probability of this happening given the rivalries within the assembly, Van Brempt said she has held preliminary talks with the internal-market committee and sounded an upbeat note.

“I am very confident,” she said. Pressed to elaborate, Van Brempt smiled and declined, saying “you know how it goes.”