You are here: Home  /  American Car  /  Cars Brands  /  Chevrolet  /  The Day The Millionth Corvette Rolled Off The Line Into a Sinkhole
American Car 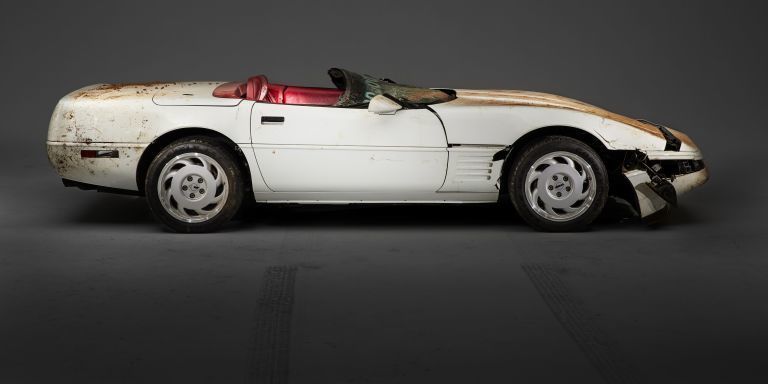 The 1,000,000th Corvette rolled across the Bowling Green plant to a cavalcade of applause, balloons, and orchestral music, went across the street to the National Corvette Museum, led a quiet life not being driven anywhere, and eventually fell into a sinkhole.

Twenty-four years ago today, the one millionth Corvette rolled off the line in Bowling Green, Kentucky. It was a facelift C4 convertible, white with a red interior, with the LT1 engine and a black soft-top. Zora Arkus-Duntov, then 83 years old, was on hand. Every employee signed a piece of the car.

Let’s face it: the sinkhole at the National Corvette Museum may just be the strangest thing to happen in the automotive world, up there alongside the Levi’s edition AMC Gremlin or a $71,000 BMW 2002. In the grand scheme of things that couldjimwatchesal befall any one of us, sinkholes are one of the most tremendously weird and terrifying parts of the incomprehensibly improbable experience of living on planet Earth, in this solar system, in this universe. The specificity is even stranger. Why not a strip mall in Ocala, Florida? Why not a mining settlement in Perfection, Nevada? But no—the fact that a forty-foot sinkhole struck the soft terrain underneath the National Corvette Museum’s spire, swallowing eight Corvettes with it, including this one, is a footnote in God’s plans for humanity that will be forever impossible to comprehend.

In the grand scheme of things, restoring a C4 Corvette might be more straightforward than restoring, say, the one-of-one XP-882 Aerovette concept parked next to it. But it still wasn’t easy. The hellaciously extensive restoration took four months and 1200 man-hours and untold fortunes of labor costs, but GM craftsmen saved nearly every single body panel and even straightened the original frame and windshield surround.

The millionth Corvette is back on display at its namesake Museum, in as pristine a pre-sinkhole state as it could be. Who says things don’t get accomplished in America? After all, it’s one of one: the only millionth Corvette in the existence of the known universe.

And every employee’s autograph was saved. 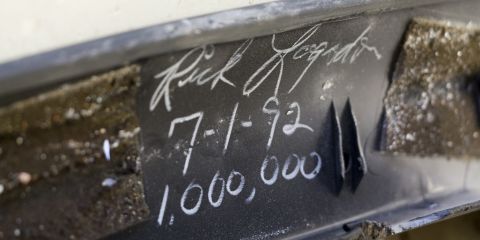