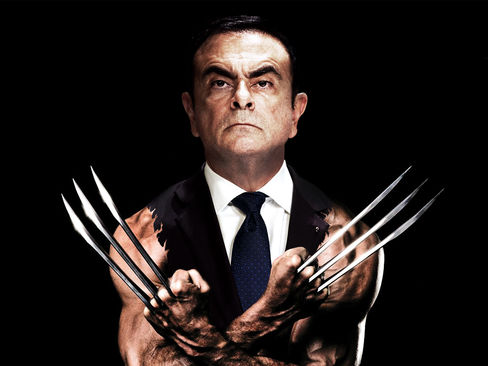 Three years later, Ghosn was sent to revive Renault partner Nissan Motor, which had been unprofitable in seven of the previous eight years and was the most indebted carmaker in the world. By fiscal 2003 it had become the globe’s most profitable major automaker. His revival of Nissan remains one of the industry’s extraordinary success stories. Ghosn even became the subject of a comic book series that reached 300,000 Japanese readers in monthly installments in 2001.

When Carlos Ghosn was brought in to rescue loss-ridden Renault in 1996, it took him only a year to turn the French carmaker around. The 20 billion French francs of expense cuts he imposed earned him the nickname Le Cost Killer.

Now he’s being called in to play superhero again, as part of Nissan’s agreement in May to pay $2.2 billion for a controlling stake in Mitsubishi Motors, which saw its shares plunge 40 percent after a scandal broke in April. The peripatetic Ghosn—he’s chief executive officer of both Yokohama-based Nissan and France-headquartered Renault—will need to quickly clean up Mitsubishi’s image, which has been tainted by the company’s recent admission that for more than two decades it used improper fuel-economy testing methods and since 2011 has overstated the fuel efficiency of its minicars sold in Japan. He’ll also likely have to get out his scissors again, to eliminate overlap in purchasing and vehicle development.

An embattled Mitsubishi faces big scandal-related costs in Japan. Production losses, penalties, and compensation to customers could total as much as 376 billion yen ($3.4 billion), estimates Goldman Sachs analyst Kota Yuzawa. Yet it isn’t in as bad a financial shape as Renault and Nissan were when Ghosn arrived to rescue them in the 1990s. Mitsubishi had about 450 billion yen in net cash as of March 31 and has been profitable for seven years.

So if Ghosn can squelch the fuel-efficiency scandal and put in place cost cuts that restore investors’ faith in the company’s future, Nissan stands to get a healthy return on its Mitsubishi stock—and protect the steady supply of minicars Mitsubishi builds for sale under the Nissan name.

“I don’t think we can say what’s coming is much more difficult than what we have seen,” says Ghosn. “It’s going to be challenging. There’s a huge reward if we are successful.”

A Renault-Nissan-Mitsubishi alliance—which would create the world’s fourth-largest automotive group—could yield big savings by combining parts and materials purchasing, sharing power-trains, and jointly developing mini-vehicles, according to Credit Suisse analyst Masahiro Akita. “If you lay out everything that’s known currently, the deal could represent quite a smart decision,” says Thomas Glendinning, an auto analyst at BMI Research.

Mitsubishi and Nissan set up their minicar venture in 2011 and have been looking to strengthen ties, Ghosn says; the fuel-economy scandal just accelerated the talks. He lists common vehicle platforms, shared electric-car technologies, and financial-services ventures among the areas in which Nissan and Mitsubishi can cooperate more. He’s also sending Nissan managers to run vehicle development at Mitsubishi.

What Ghosn wants most from the tieup may be more exposure to fast-growing Southeast Asia, where Nissan trails Toyota Motor, Honda Motor, and even the much smaller Mitsubishi. After closing plants in Europe and the U.S., Mitsubishi is focusing on expansion in Southeast Asia, where its popular Triton pickup and Pajero SUV help it sell twice as many vehicles as it does in Japan. It has said the mileage scandal didn’t occur there.

“They assured me that there are no problems outside Japan,” says Ghosn. “These are people we trust—we have been working with them for four years, and they never told us something which was completely out of whack.”

Nissan, whose engineers were the whistleblowers who initially noticed discrepancies in the fuel economy of minicars supplied by Mitsubishi, will have to help its new partner overcome the crisis first. Investigations into Mitsubishi’s overstating of mileage are still under way, and the company recently found that models other than minicars were also improperly tested in Japan. Mitsubishi President Tetsuro Aikawa has said he’ll step down after a shareholder meeting in June.

Mitsubishi could burn through its cash quickly, says Koji Endo, an analyst at Advanced Research Japan. That’s because Endo expects sales of Mitsubishi vehicles to fall in Japan as news of the scandal spreads—its minicar sales fell 45 percent in April—and liabilities regarding the mileage misstatements to be large. In the worst case, says Endo, Ghosn may even have to shut down Mitsubishi’s Japanese operations and rely solely on its healthy business in Southeast Asia.

Under Nissan’s agreement with Mitsubishi, Ghosn has a year to complete the investment deal. Yet BMI Research’s Glendinning says even that might not be enough time to carry out a thorough investigation and “pinpoint all of the misconduct by the corporate management.”

Ghosn says Nissan won’t be “jumping into a black box” and will be able to confirm all the facts before completing the Mitsubishi investment deal within four months. If somehow Mitsubishi doesn’t confirm its numbers and projections, he says, it’s a reason to “stop whatever we are engaging.”

If things go as planned, analysts expect a repeat of the very non-Japanese management style—fast-paced, sharp-penciled—Ghosn is known for. “He is a different animal,” says Edwin Merner, president of Atlantis Investment Research in Tokyo. “He sees things in a very objective way.” Mitsubishi is about to learn that firsthand.

The bottom line: Nissan is trying to revive Mitsubishi Motors, whose stock fell 40 percent in April after it admitted overstating mileage of its minicars.