You are here: Home  /  Automotive News  /  Cars Brands  /  German Car  /  Porsche  /  The Naturally Aspirated Era of the Porsche 911 Is Over.
Automotive News 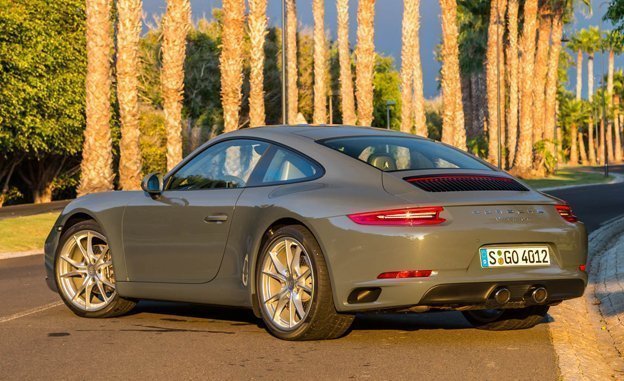 Since they’re 11.5 inches wide and fill every horizontal millimeter of the fender opening, the crazy-sexy rear-end sheet metal curves are likewise as close. I register those rock walls peripherally, robotically; I register the center yellow line as a scribbled suggestion on the tight, impeccable pavement; I watch the tach needle do its insane dance and the digital speedo flash numbers like a calculator on the fritz. I also register my driving partner’s hands, calmly folded in hi The sidewalls of my rear tires couldn’t be more than a fist’s width from the rocky mountain walls. s lap. We auto journalists are a trusting bunch.

Like any driver, under normal conditions my mind would wander delightfully and acceptably, and I think of future plans and of girlfriends past, or when that tax refund might hit my checking account. Today I am not driving normally; my mind cannot afford to wander. Today my mind is possessed, fixated on chasing the Miami Blue 2017 Carrera 2S that’s scorching the pavement some 50 feet ahead of my “base model” Porsche 911 Carrera 2. My mind and body are thrumming lockstep with this glorious, superlative machine, as together we cook rubber and crush apexes to dust. For kinky, winding miles and lustful minute after minute, the only extraneous thought I allow my laser-focused cortex is that no other being on earth is having this much fun.

The setting: Napa Valley, California’s wine region famous for dot-com-zillionaire vineyard owners, lushly undulating beauty, and, thankfully, for its outrageous, twisting roads. There should be an ordinance here requiring massively bolstered seats. But not everyone in Napa is screaming across warm tarmac in the newest quintessential sports car, passing slow trucks again and again: downshift, downshift, downshift, spool… warp speed. What a lovely way to see the blurry sights.

This is a very important car. 2017 marks the end of an era for the Porsche 911 and the beginning of a new one. For the first time in its history all 911’s will now be powered by twin-turbocharged engines, not just to amp performance, but also to improve fuel economy. Sorry to say, naysayers, but that is a very, very good thing.

Yes, there’s still a flat-six out back; no, there’s no ridiculous “turbo” badging; yes, Porsche’s ultra-high-performance halo car will still be called the “911 Turbo.” Impressive tech under the rear hood essentially eliminates any lag; better yet, when mated to the truly astounding PDK transmission, both the Carrera and Carrera S shave 0.2 seconds off their 0-60 times (for a resultant 4.0 and 3.7 seconds, respectively).

Two decades ago, enthusiasts bemoaned Porsche’s decision to move from hand-built 911’s with air-cooled engines to liquid-cooled engines. A dozen years ago, purists accused the brand of blasphemy for introducing an SUV into their lineup. Today dissenters will spit and howl that the naturally aspirated engines are gone. But if you’re upset about the “loss” of naturally aspirated engines, you’re in the wrong. Each generation of whiners has been wrong: wrong to clutch so tightly to the peak of the last generation’s technology. Evolution is the only way forward. The new 911 is the long-con, endgame reason that cavemen developed tools: sublime near-perfection in physics-defying capability, engineering and pleasure.

But if you’re upset about the “loss” of naturally aspirated engines, you’re in the wrong. Evolution is the only way forward.

My instincts dictate that the steady, light rain falling along this leg of our route will rob me of thrills, but no matter. That’s why Porsche makes the 911 Carrera 4S, which happily (heavily) chirps all four of its wheels off the line and sucks itself to pavement; never once in this madman journey does it waver from my chosen line or cringe at my steering inputs. In fact, later on I’ll end up feeling guilty that I couldn’t satisfy the car. The rear-drive Carrera I drove through the mountains can put its 370 horsepower down in ways that border on pornographic; it begs you to explore its limits like a platinum-level BDSM escort. But the 4S, with its 50 extra horsepower, two additional driven wheels and rear steering, pulls out of corners so capably and accelerates so unrelentingly that if you’ve got the balls to seek performance limits it’s possible to relocate your own spleen using G-forces alone. And still the 911 will beg for more.

Curving along the coast, I rocket into a forest of California Redwoods. Again I’m hunting for the Miami Blue Carrera S, its smooth electric paint darting just out of view after every turn, contrasting perfectly against the mossy, fragrant giants looming through the perma-mist hanging in the air. These trees have kept silent watch over the earth for upwards of 700 years; in that time the most savage noise they have heard is the feral scream of a bobcat. I feel a wave of ecstasy as that title is stripped and rewarded anew to the barbaric havoc of my dual sport exhaust. Downshift, downshift, downshift, spool… no other being on earth is having this much fun.