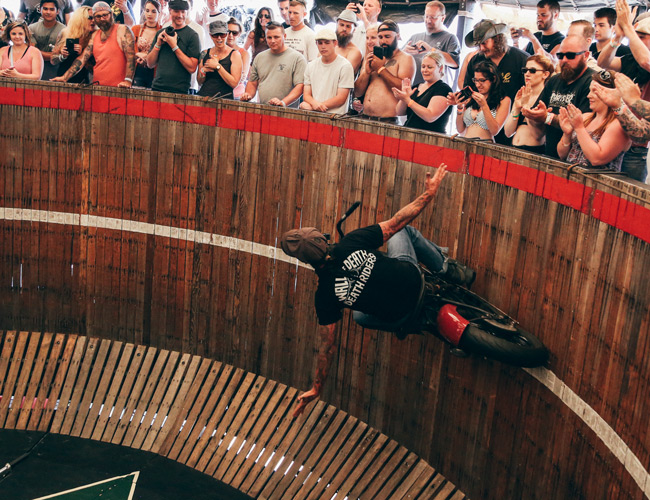 Introducing The Wall of Death at the Race of Gentlemen

Though the promotional poster for TRoG encourages period dress, for most of the racers and attendees the old-school garb — beards, tattered jeans, mechanic overalls, worn boots — is not a fashion statement. It’s a lifestyle. The cars and motorcycles the racers pilot are all pre-war era or thereabouts. Some of the machines look as fit and polished as the day they were built 70-odd years ago, mirror-finished aluminum missiles sitting between four skinny whitewall tires. Others, however, show their age, running a little rough, rusted all over, seemingly ready to go up in smoke every time the carburetor opens. But not a single one is wanting in visceral feel or asks anything less than the full attention of all five of your senses. These cars aren’t watered down or padded with crumple zones, airbags and traction control — those are modern safety nets and you can keep ‘em. Each year, on the beach at Wildwood, New Jersey, the Race of Gentlemen attracts a gathering of a certain kind of enthusiast.

For all its nostalgic aesthetic, the Race of Gentlemen’s signature look gives it a refreshing sense of pure danger (even though the cars never really go all that fast). Safety appears as it did in the era TRoG emulates — that is to say minimal, but that’s what makes this year’s new attraction so fantastic. The Wall of Death is a 12-foot high, 20-foot wide barrel of vertical wooden planks and Rhett Giordano is the ringmaster. While his two assistants stand in the center, Giordano rides around the Wall of Death — sometimes with no hands, on the tank, and he even does powerslides — in jeans, a t-shirt and helmet-less. The danger is the entertainment. Giordano knows it; he also loves it. Watching him ride around on a wall parallel to the ground is amazing, and I bet it’s even more incredible to actually do it. Face it: sometimes to have the most fun in life, you have to put safety in the rearview and say, “fuck it.”