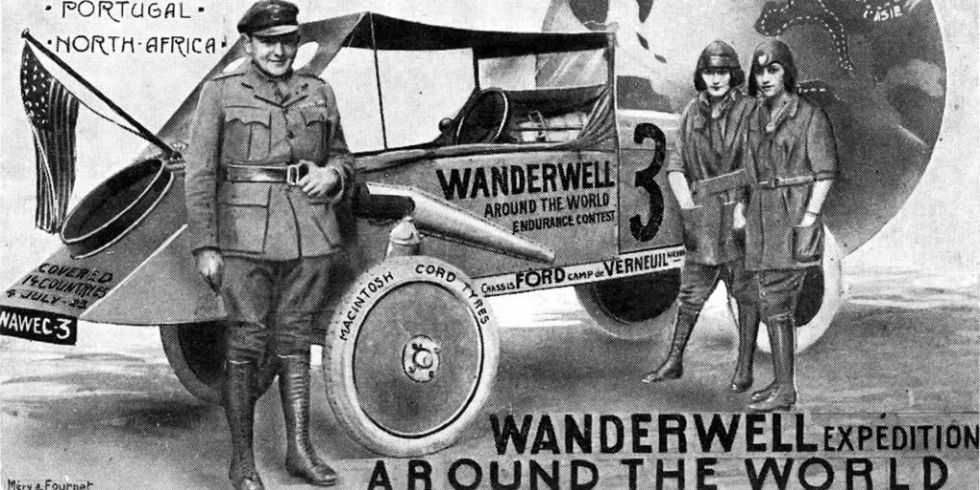 The Woman That Drove Around the World in a Model T

This “Amelia Earhart of the automobile” spent seven years traveling the globe starting in 1921, when the world was hostile to cars and women alike. She was 16, and she signed on board to join a man named “‘Captain’ Walter Wanderwell,” but whose real name was Valerian Johannes Piecynski, to see who could visit the most countries in the world.

Aloha Wanderwell was born with an adventurer’s name, and she certainly lived up to it. The first woman to drive a car around the world “wore men’s breeches and had a pet monkey,” says Atlas Obscura. We can only hope to live so well, to achieve such great things.

They traveled in a fleet of Ford Model Ts, along with a camera crew and a pet monkey named Chango.

Aloha—who was born Idris Galcia Hall in Winnipeg, Canada—served as a jack of all trades: “cinematographer, photographer, translator, driver, actress, and seamstress,” as well as documentarian. She spoke French, Spanish, Italian, Russian, Chinese, and Japanese. She grew up a tomboy with wanderlust and grit—her father was killed in World War I—and she was tall, blonde, and beautiful, as well as an unabashed feminist, who flaunted her men’s attire as a necessity. She got caught up in civil strife in China. She had to tow out Model Ts alongside oxen in Africa. She chronicled food shortages in Germany after World War I, and her films of native peoples in Brazil are now in the Smithsonian. She eventually fell in love with the Captain and had two children with him, just before he was mysteriously murdered on a yacht, which is still a fate far more interesting than what many of us will face.

Throughout the 1920s and 1930s, she was famous—but, eventually, the adventures fell into the dust of history. She deserves to be rediscovered. That’s why her story is well worth the read: a lady adventurer who saw so much of the world—by car, nonetheless—before it changed, over and over again.