Each truck listed here is special in its own way, but all of them have the same purposeful utility that we still value today—enough so to maybe even make you pry open your wallet and find some room in your garage. They are presented in no particular order, but I assure you that at least one or two will get stuck in your brain. And to be clear, that is exactly my intention: to not just expand your knowledge, but to sway you into buying a vintage truck. I feel no guilt about this mission. Go get one!

While just about every car geek is familiar with classic pickups like the ’40 Ford, Series 1 and 2 Chevys, and perhaps even more unique 4x4s by Marmon-Herrington (mostly for Ford) and Napco (mostly for Chevy and GMC), chances are many are unaware of the niche orphans and forgotten variants on this list. So let’s take a moment to celebrate and consider these lesser-known design classics. 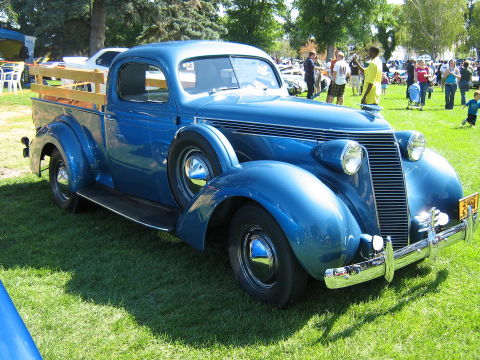 Studebaker made commercial vehicles starting in 1914 up through 1964. Going commercial was a logical step for Studebaker back then, as it was already highly regarded for its horse carriages and had a loyal customer base in farm and industrial communities across the nation. For me, this J5 Coupe Express model, with its perfect art-deco lines flowing uninterrupted from stem to stern, is the coolest light-duty Studebaker truck of them all. The more streamlined design was due to Studebaker developing this pickup off of the popular Dictator passenger car series. Consider this the forefather of the Ranchero and other car-based pickups that came on the scene some 20 years later.

The Express initially saw limited sales compared to the cheaper Ford and Chevy models of the era (priced some 15 percent higher than the average), with about 3500 total examples built in South Bend, Indiana (3125 units) and in Vernon, California (375 units). There were even a few “woodie wagon” versions offered in the earliest days of production. Not only were these little trucks stylish, but they also featured many nifty features not found on other rival contemporary trucks, such as wing windows (seriously important in the days before A/C), a double-walled bed, a hill holder, and an overdrive transmission.

Neat trivia: The front and rear fenders are interchangeable! 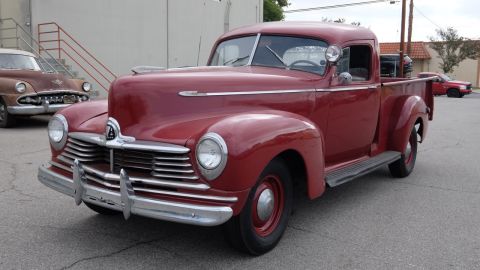 The earliest Hudson trucks were used by the dealerships and sometimes as local fire trucks and ambulances as early as 1914. Most were built by second parties or the dealers themselves. The first in-house pickup came in 1929. Originally the trucks were branded Dover when they were based on the Essex car chassis, but the name switched to Terraplane from 1934 to 1938. Hudson made its biggest commitment to commercial vehicles and pickups in 1939 with three wheelbases and several trim levels on offer.

The earlier Terraplane pickup is neat in its own right, but it still kind of looked like an adapted coupe. My personal favorite is the C28 made from 1939 to 1942 and again from 1945 to 1947 after the war. They are commonly referred to as a “Big Boy,” but that name was officially designated for the three-quarter ton version and excluded the half-ton. The Big Boy is virtually the size of a modern pickup, with a 128-inch wheelbase and a huge bed measuring 4’9″ x 7’9″.

It looks more like something skillfully customized—chopped, channeled, and Frenched—than a production model.

Hudson made a smart move when contemplating this design. It realized that it did not have the resource to compete with the Big Three in the economy truck market, so, instead, it decided to create the gentleman’s pickup and crafted this model based on the big Hudson Commodore sedan. The end result is a utilitarian sculpture that had such fluid lines you could appreciate it without ever even thinking of its passenger car sister. It looks more like something skillfully customized—chopped, channeled, and Frenched—than a production model.

The styling was not the only benefit gained from using the passenger-car design. Mechanically, these trucks were quite advanced, with a big straight-six, column-shift manual (when almost every other truck was still on the floor), independent front suspension with sway bar, and other quality details.

In addition to the pickup, Hudson also offered a sedan delivery version, although I have never seen one. In 1948, the company switched to a unibody design, so the whole commercial line was scrapped. I personally just bought a ’46 a few weeks ago and cannot wait to get started on the resto!

Neat trivia: Perhaps the graceful design details on this truck could be due to the female perspective. The dash and much of the trim on this model was designed by America’s first woman designer, Betty Thatcher Oro. 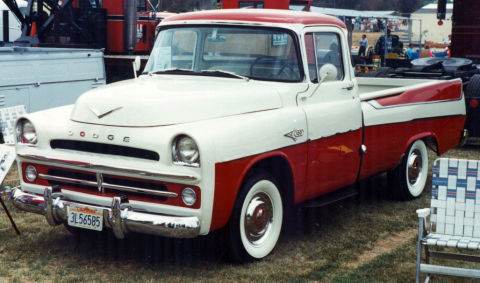 The so-ugly-it-is-beautiful Sweptside was offered from 1957 to 1959 as Dodge’s answer to the Chevrolet Cameo, the Ford Ranchero, and ultimately, the flashy tastes of the American public at the time. Back then, Dodge had a special division called the Special Equipment Group, which was generally tasked with configuring the commercial vehicles to the specific needs of fleet buyers. This project was assigned to the SEG team because the project had little to no budget and Virgil Exner’s Advanced Styling Studio at Chrysler was slammed.

The crafty SEG crew, led by Joe Berr, knocked it out in a hurry, mostly by raiding the parts bins from other models. They started with a standard long-bed custom cab, grafted on rear quarter panels and a back bumper from the two-door station wagon, and then hung on every shiny trim piece they could get their hands on  . . . Voila! Dodge rushed it to market in late 1957, but the Sweptside didn’t sell well and never even made it to the production line. Most units built were fully loaded, with a V8, automatic transmission, flashy two-tone paint, and more. They were also built by hand, a costly endeavor. Only about 1200 were ever made, and they are quite hard to find. If found, they are even harder to restore due to the many unique parts and their hand-crafted bodies.

Neat trivia: It’s said that 90 percent of these were painted red and white. 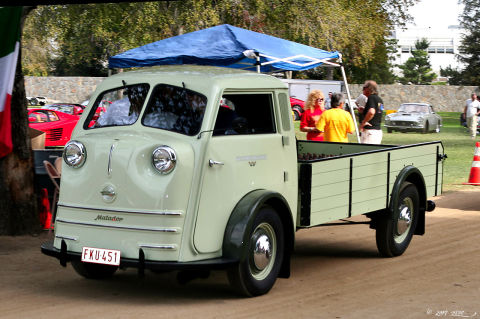 Here we have the front-wheel-drive Matador. Beauty is in the eye of the beholder, as they say, so you’d be forgiven for thinking that a pug designed  this vehicle. In fact, these trucks were built by Vidal Sohne in Hamburg, Germany, from 1949 to1951. They were available as passenger or cargo vans and pickups. Despite their measly 25-hp motors sourced from Volkswagen, they were famous for their ability to haul huge loads.

Unfortunately, VW started development of its own competing vehicle, so it stopped supplying engines to Tempo. This forced a complete redesign to the Tempo, which now had to run an Austin engine and required many design changes. I find the newer versions to lack the funky charm and quirky looks of the earlier Matadors. Sohne only produced about 1200 of these vehicles, but they have quite the cult following. I’ve seen a few at shows over the years, and I think this could make a great EV resto-mod. Hmmm . . .

Neat trivia: For some reason, these became a huge success in Uruguay. There are several clubs dedicated to the truck to this day. 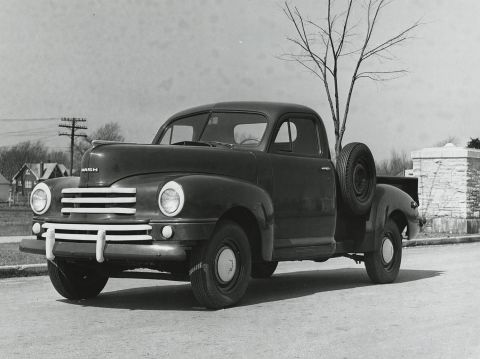 Betcha didn’t know Nash had a pickup! Well, for awhile, back in the early 20th century, Nash was the world’s largest volume truck manufacturer, with 11,490 units made in 1918 alone. It closed its commercial division in 1931 to focus on cars, but from 1947 to 1955 it did produce a few thousand “Haul-Thrift” trucks based on a three-ton chassis and the sheetmetal from their 600 series/Ambassador passenger car. Most were wreckers, and officially they were for export only. Apparently that rule was not strictly enforced, because many of their dealers ended up with them, using them as parts runners and tow trucks at the dealerships. Odder still, several half-ton and three-quarter ton versions have been accounted for as well.

Nash never officially offered the Haul Thrift, but there are vintage factory photographs of several versions, and such an effort would not have been made unless the company had some sort of grand plan. There are also published media stories in 1946 about Nash’s intention to make pickups again. But after merging with Hudson in 1954, all factory archival information was lost. So despite my wealth of automotive historic knowledge and ample research effort, this one remains a bit of a mystery.

Neat trivia: I have seen a few of the larger Haul Thrift versions come up for sale, and they are surprisingly cheap. That model, as well as the smaller versions, had super-cool machine-turned gauge panels.

Jonathan Ward is the founder of Icon Customs and an avid car geek. As a Road & Track contributor, his monthly column, Ward’s World, covers all matters of design and automotive miscellany.