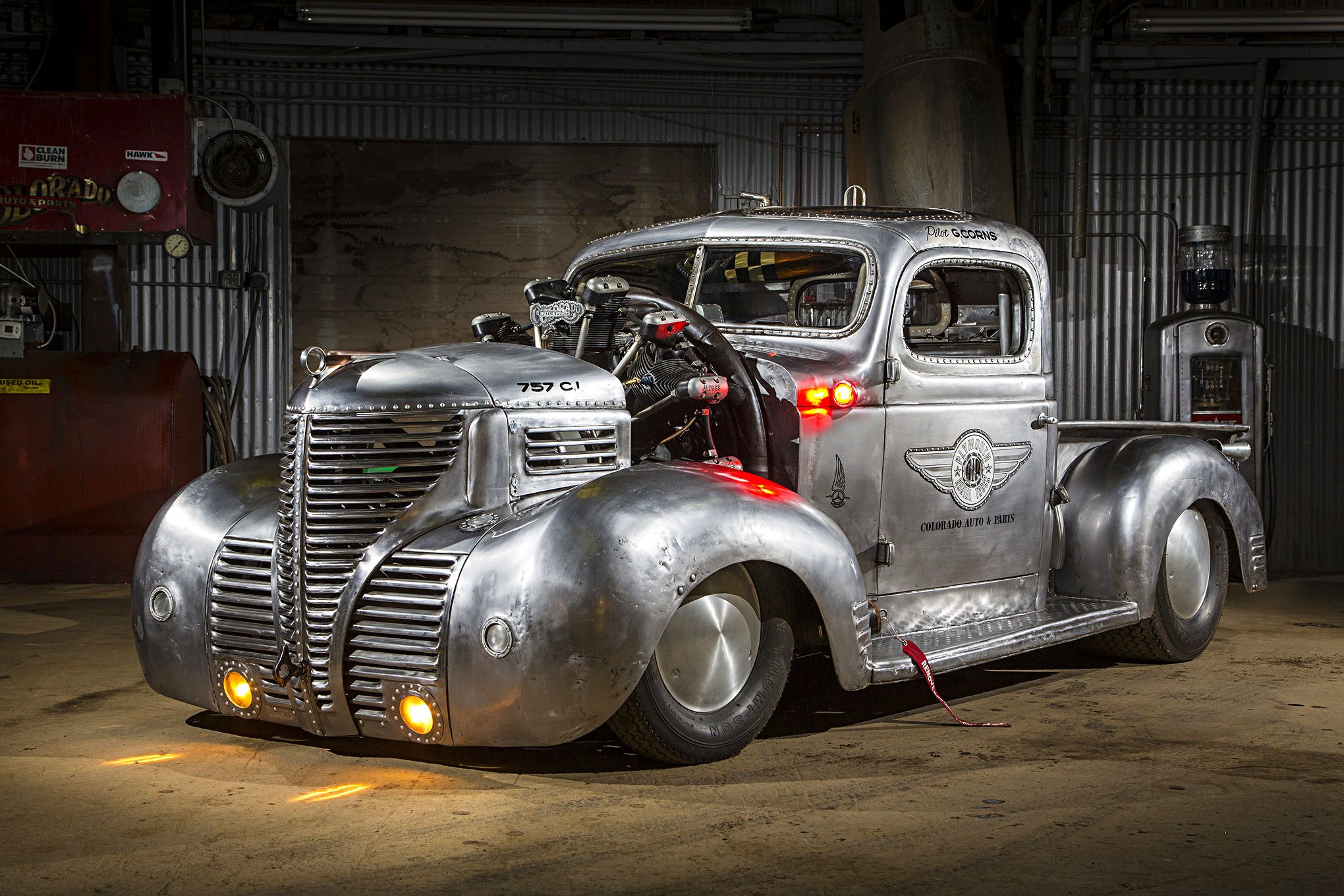 There’s quite the backstory to the Corns family’s love affair with airplanes. When the younger Corns, Adam, was about 13, he was obsessed with flying. For his birthday, his parents, Gary and Alice, got him a ride in a stunt plane. Seems pretty sweet, right? But it all went horribly wrong when the plane clipped some power lines and crash-landed right in front of Adam’s terrified parents. Incredibly, Adam wasn’t even hurt and the pilot only suffered a black eye—Adam joked that even that was only from his mom punching him. She didn’t, of course, but she probably wanted to. Still, the Corns liked airplanes, but decided to keep them on the ground in the form of aviation-inspired cars.

Adam Corns is now 27 and works with his brother, Eric, and his parents at a family-run salvage yard in Englewood, Colorado. The yard has been in Alice’s family since 1959, and the whole family is super into collector cars and wacky wrenching—so when cool stuff comes in, it’s more likely to go in the project pile than the crusher. Cool stuff comes in often when you work in a wrecking yard, and the project queue can get pretty long. “We have a group of friends who come by on Wednesday nights, and instead of playing poker, we build cars,” says Alice, and Gary adds that the rules for joining this weekly wrench-o-rama are: “Love cars, bring beer, and have a sense of humor.”

It’s obvious Gary and Alice have a sense of humor the second you see their 1939 Plymouth pickup. Its pockmarked, raw-steel body is dotted with rivets, and rising out of the open engine bay is a halo of finned cylinders—an airplane radial engine shoved back against the firewall. The joke’s on you, though, if you think it’s all for show. When Gary starts it up, there’s a wheeze and then a rat-a-tat-tat in the bare-metal engine bay. Smoke billows around the Plymouth and it disappears before you can comprehend what you’re looking at.

The Plymouth started as just an old truck, one that Gary picked up from a customer for a couple hundred bucks, and then sat around for almost 30 years. He wasn’t quite sure what he wanted to do with it, but he knew that inspiration would come. “One day, my dad said we needed another project,” Adam says. “He went over to an airplane wrecking yard and the next thing you know, this 1950s seaplane shows up on a trailer, and he says we’re gonna use the 300hp Jacobs radial engine for the truck. Growing up around metal, you never question if it will work, you just start welding.”

Before breaking out the welder, the Corns had to see if their aircraft powerplant was still in sky-high condition. A customer offered the use of a radial-engine runstand—because the Corns are the kind of people who know people who just happen to have 1950s radial engine run stands sitting around. “It fired up and we couldn’t believe it!” Gary says. Eric tracked down a new single-barrel updraft carb on eBay, and the fun of fitting the round peg in the square truck began. 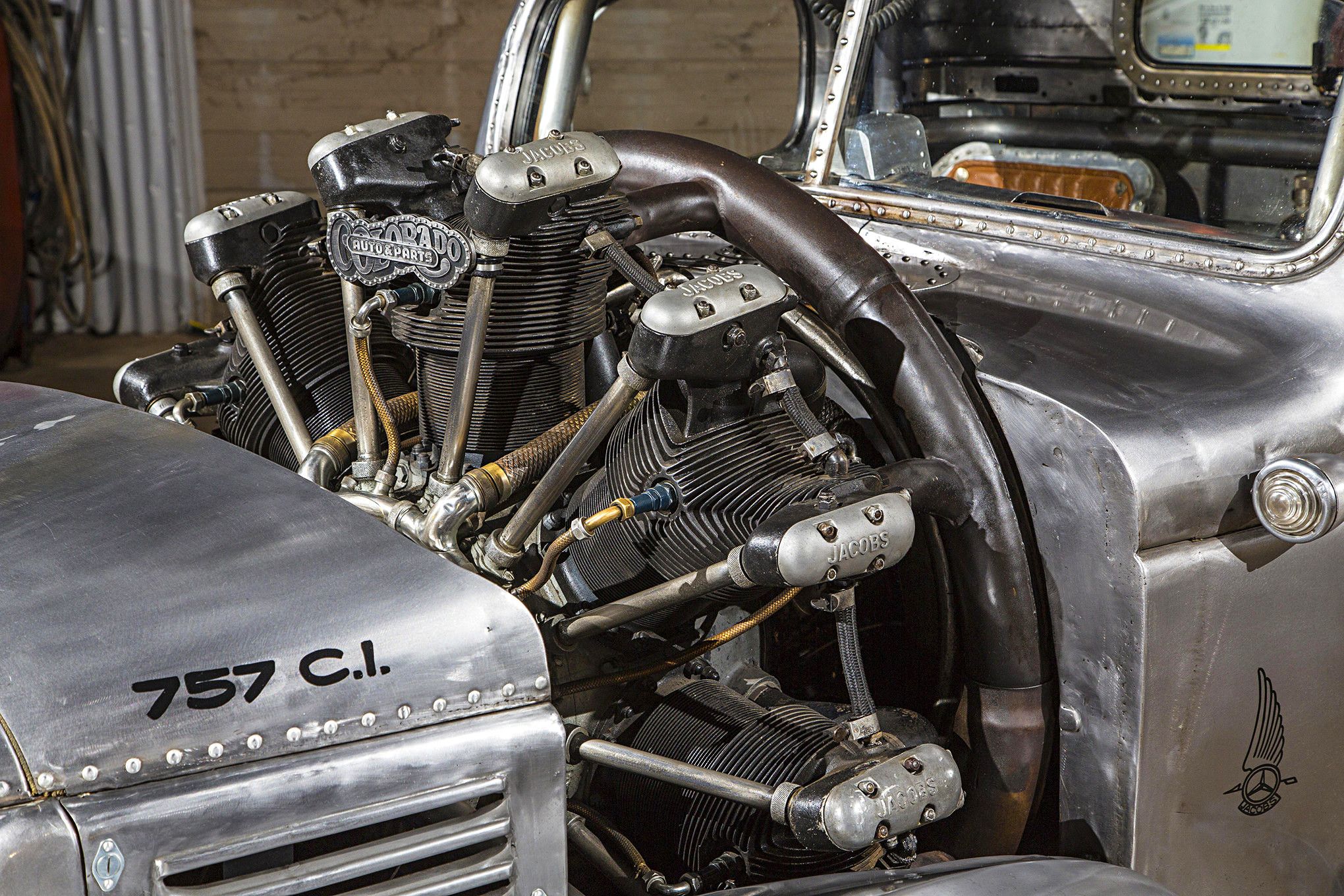 Welding, bending, cutting, and inventing—often in the wee hours of the morning—the group made short work of removing the truck body from the stock chassis and stripping it to bare metal. The top was chopped, the rear was tubbed, and more than 1,000 hand-bucked solid rivets now trace lines around the pickup’s panels. The original framework was ditched in favor of a custom tube chassis, which extended the front end of the truck to make room for the seven-cylinder Jacobs radial. Since the airplane engine was designed to turn a propeller, getting the power back to the Turbo 400 automatic trans and narrowed Franklin quick-change rearend took some engineering, with most of the components either scavenged from the yard or handbuilt in the shop. The propeller shaft is connected to a custom cogged pulley that runs down to a boat V-drive with a 3-inch Kevlar blower belt. A custom driveshaft heads back from the bottom of the V-drive flange to the front of the transmission, where a clever assembly made of a 1970 Chevelle pinion and various old Ford bearings spins the 12-inch torque convertor. “In the end, the transmission thinks it’s connected to a small-block Chevy,” Gary says.

The transmission may think everything is copacetic, but inside and out, the truck thinks it’s a plane. Pitot tubes and aircraft lights dot the exterior, and in the interior, leather aircraft seats face dual steering yokes and an array of gauges intended to soar above the clouds. Airplane geeks will get a kick out of the cartridge shells and “shotgun” starter in the handbuilt console. Early radial engines used what were basically shotgun blanks to send a gust of high-pressure gas into the cylinder to start the engine. Even though the Jacobs engine is started with a more modern electric method, Gary always loved the scene in “Flight of the Phoenix” where Jimmy Stewart has to start a plane while lost in the desert with a limited number of cartridges. “I just built what I thought it might look like,” he says about that little touch of cinematic drama.

When the Corns started on the air truck, they were planning to run it on the Bonneville salt flats, but then the race got canceled—and canceled again. While still hopeful about getting out to Utah, Gary and his crew haven’t just been sitting around waiting for Speed Week. Besides making numerous passes—and lots of smoke—for our photographer, the Plymouth “Air Radial” has been flying around the show circuit, picking up awards and even offers of a reality show based around the Corns family business. Gary says one of the coolest things has been the response from the aviation community. “A former CEO of Cessna saw it and liked it so much he brought me parts and signed the console. A VP at Lockheed Martin asked me to explain how we put it together. We must be doing something right when a rocket scientist is asking us how it works.”