You are here: Home  /  Auto Tech  /  Truckmakers including Volvo AB and Iveco face record fines from the European Union for charges of price fixing
Auto Tech 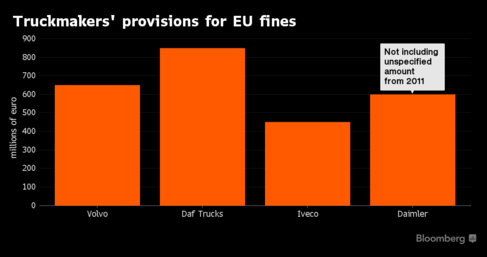 The fines may come as soon as the end of this month, said the people, who asked not to be identified because the probe isn’t public. Most of the companies including Volvo and DAF Trucks owner Paccar Inc. have set aside millions of euros for fines and agreed to settle the case with the European Commission, the people said.

Truckmakers including Volvo AB and Iveco face record fines from the European Union for charges of price fixing, a total that will exceed the 1.7 billion-euro ($1.9 billion) penalty for banks after the Libor scandal, according to five people familiar with the EU probe.

Volkswagen AG’s MAN SE may escape fines for being the first to inform the regulators of the price-fixing, two of the people said. That would be a partial reprieve for Volkswagen, which last week agreed to a $15 billion settlement in the U.S. to pull emissions-cheating diesel vehicles off roads and faces other probes and lawsuits elsewhere.

Thewww.replicaukonline.co.uk
auto industry is the focus of investigations by competition authorities across the world. Mitsubishi Electric Corp. and Hitachi Ltd. agreed to pay a 138 million euro EU fine in January for a car-parts cartel. Manufacturers of ball bearings to car and truckmakers were jointly fined 953 million euros in 2014.

Huge fines for cartels are the Brussels-based commission’s ultimate weapon to punish companies that cheat by fixing prices. The regulator — which is still probing banks over foreign-exchange manipulation — doled out massive penalties in 2013 for companies accused of rigging benchmark interest rates. That remains a record even after the commission cut the amount to 1.49 billion euros due to a calculation error.

A settlement entitles companies to a 10 percent reduction for promising not to challenge the EU in the courts. Truckmakers may still face lawsuits from customers seeking damages for overcharging.

A spokesman for Scania, also a Volkswagen brand, confirmed the company hadn’t put in place any provisions for a penalty and declined to comment further as EU proceedings haven’t been finalized. The truckmaker said last year that “it is more likely than not that the commission will not ultimately be successful” in finalizing the case.

A spokeswoman for Daimler’s truck division confirmed the manufacturer raised provisions for possible related costs by 600 million euros in 2014. She declined to elaborate on the total amount the manufacturer has set aside since investigations started.

Volvo last month set aside more money to bring its fine provision to 650 million euros. Paccar has made a provision of 850 million euros for its DAF Trucks unit and CNH Industrial NV allocated $502 million for a possible fine for Iveco. Daimler added 600 million euros in 2014 to an unidentified amount it put aside in 2011.

The EU sent makers of heavy and medium trucks a statement of objections in November 2014, accusing them of participating in an illegal cartel. It didn’t identify the companies involved in the case. Volvo, MAN, Paccar and Daimler said at the time they received objections.